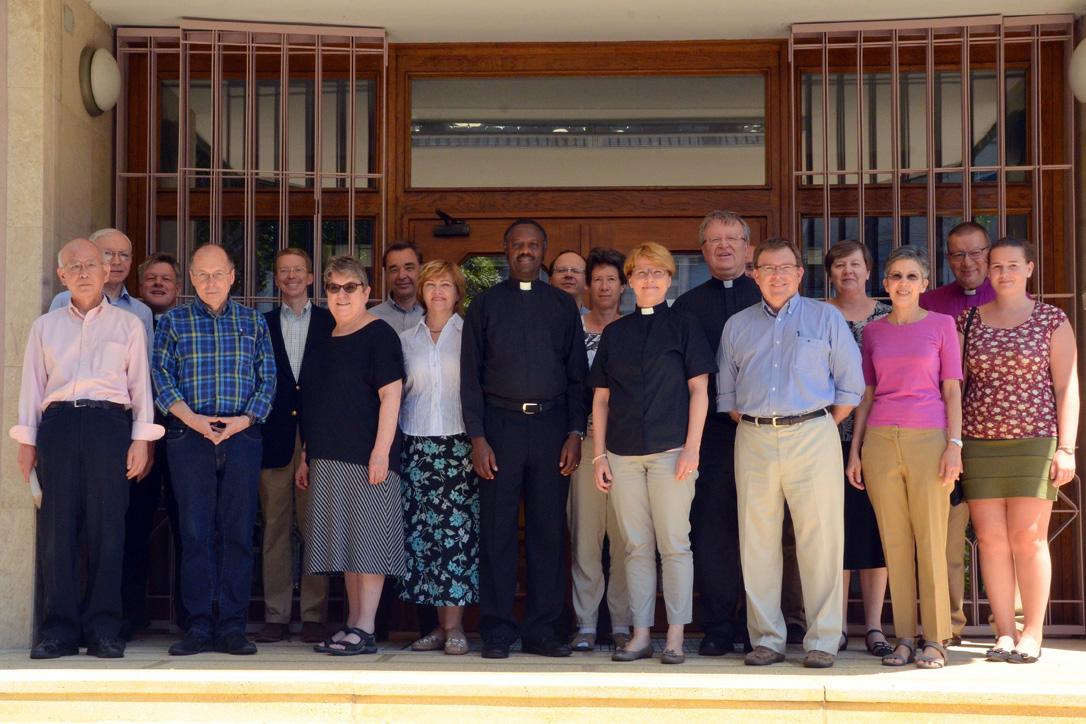 Participants of the consultations in front of the theological institute. Photo: Zsuzsanna Bolla-Horvath/ ELCH

BUDAPEST, Hungary/ GENEVA, 23 July 2015 (LWI) - Lutheran and Roman Catholic theologians have met in Budapest, Hungary, 13-21 July as part of their ongoing commitment to understand the common ground they share and differences they hold on baptism.

The two Christian traditions have been in dialogue for 50 years on a variety of theological issues and the most recent meeting of the Lutheran-Roman Catholic Commission on Unity focused on “Baptism and growing communion”.

In this study of baptism, the commission is building on earlier ecumenical dialogues on baptism and focusing on the question of what kind of ecclesial communion arises from Lutheran and Roman Catholic shared understanding of baptism.

The Budapest meeting was organized by The Lutheran World Federation (LWF) and the Pontifical Council for Promoting Christian Unity and the local hosting church, the Evangelical Lutheran Church in Hungary (ELCH).  Meetings took place at the Lutheran Theological Seminary.

The conversation began in 2009 but was halted by preparations for the study document, From Conflict to Communion, which is the first attempt by Lutherans and Roman Catholics to describe jointly the history of the Reformation, the 500th anniversary of which will be marked in 2017.

“Some may ask why we need dialogue between Lutherans and Catholics on baptism while there are other theological issues that present greater challenges between the two traditions,” Rev. Kaisamari Hintikka, Director of the LWF Department for Theology and Public Witness, said. She added that in looking at the kind of communion that arises on the basis of our shared understanding of baptism,  the commission was responding to one of the ecumenical imperatives presented in From Conflict to Communion – that Lutherans and Catholics should always begin from the perspective of unity. “Hence, I believe that this starting point gives us good opportunity to grow in the communion that already exists between us,” Rev. Hintikka said.

The dialogue was co-chaired by Bishop emeritus Eero Huovinen of Helsinki, Finland, on the Lutheran side, and Bishop William Kenney of Birmingham, United Kingdom, on the Roman Catholic side. The work of the meeting was based on brief thematic papers prepared by the commission members.

During the meeting a reception was hosted by the ELCH at the Lutheran High School of Deák tér, where commission members met representatives of the Lutheran, Roman Catholic and Reformed churches, and the Hungarian government.

On 19 July, the commission members visited Szentendre city, where they attended a Lutheran worship service and baptism presided by Rev. Olivier Horváat-Hegyi. Later that day Prof. Dr fr Mihaly Kranitz from the Roman Catholic Church in Hungary accompanied the commission members on a guided visit to the Basilica of Esztergom, the ancient capital of Hungary.

In an interview, Swiss theologian Eva-Maria Faber, a member of the commission on the Roman Catholic side, commented on the state of the dialogue, which has seen a number of important landmarks over the five decades.

“Steps toward more tangible unity, for example towards more visible Eucharistic fellowship, may be deficient as long as we have not clarified all theological questions and resolved the differences,” she said.

“But staying in division is also deficient and could have serious consequences,” added Faber, the Roman Catholic Professor for Dogmatics and Fundamental Theology at the Theological University of Chur in Switzerland.

Protestant theologian Prof Dr Theodor Dieter, director of the Strasbourg Institute for Ecumenical Research, called the dialogue a “form of seeing our own church with the eyes of the other church. We must not lose sight of each other – that is an on-going challenge,” he said.

The next meeting of the commission will take place 14-21 July 2016 in London, United Kingdom, and will be hosted by the Pontifical Council for Promoting Christian Unity.

Read more: “Seeing with the eyes of the others”