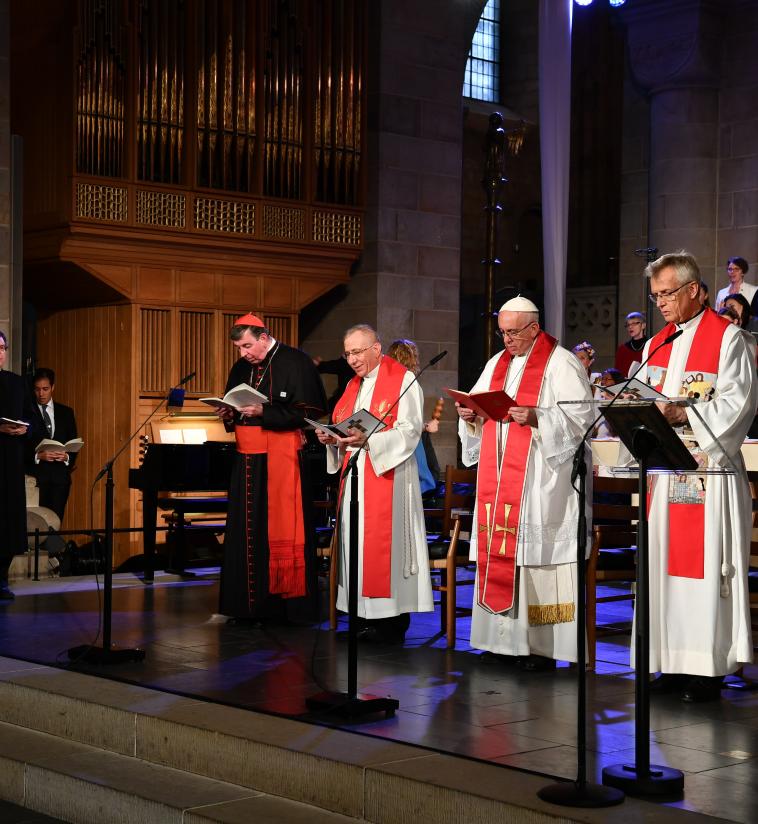 Relations between the LWF and the Roman Catholic Church

The official international dialogue with the Roman Catholic Church began immediately after the close of the Second Vatican Council in 1967. The dialogue, coordinated on the Catholic side by the Pontifical Council for Promoting Christian Unity (PCPCU), has completed five phases and produced reports on a variety of important topics.

A significant milestone came in 1999 with the signing of the Joint Declaration on the Doctrine of Justification (JDDJ) in Augsburg, Germany, by the LWF and the PCPCU on behalf of the Roman Catholic Church. The JDDJ states that Lutherans and Catholics share a basic understanding of the doctrine of justification and that the mutual doctrinal condemnations of the 16th century relating to this no longer apply.

Another vital step forward took place in 2013 with the publication of a joint study document From Conflict to Communion, which paved the way for a Joint Catholic-Lutheran Commemoration of the Reformation at Lund Cathedral and Malmö Arena on 31 October 2016. The events, jointly led by Pope Francis and the general secretary and president of the LWF, included a common prayer service and the signing of a Declaration of Intent for closer cooperation between LWF’s World Service and Caritas Internationalis, a federation of national Catholic aid and development agencies.

A joint commission of Lutheran and Catholic theologians is currently studying the historical context of the excommunication of Matin Luther by Pope Leo X in 1521 and is expected to present its results in time for the LWF’s Thirteenth Assembly in Krakow, Poland, in 2023.

Significant regional relations between Lutherans and Roman Catholics exist in different parts of the world.

Both of these regional dialogues have contributed substantially to the Joint Declaration on the Doctrine of Justification.

LWF and Caritas Internationalis (CI), the global confederation of Catholic aid and development agencies, are increasingly working together to serve the world’s most marginalized communities. Nepal, Syria and Venezuela are among the countries where the two organizations have recently stepped-up fruitful cooperation.

During a June 2021 meeting in the Vatican, the director of LWF World Service (WS) and the Secretary General of the Caritas network presented a Common Vision statement, affirming that the two organizations stand together for the sake of the neighbor – a call that is rooted in faith.

The statement also affirms the hope that by strengthening their humanitarian work for justice, peace and dignity for all people, their commitment may serve as a catalyst that can shape the doctrinal dialogues. It says that the projects of CI and WS go beyond humanitarian aid, leading to a discovery of the spiritual dimension of the work of service.

The Common Vision is the continuation of a process begun in the Swedish cities of Lund and Malmö in 2016 during the Joint Commemoration of the Reformation. During those events, LWF and Caritas signed a ‘Declaration of Intent’ to step up their shared commitment to joint witness and service.