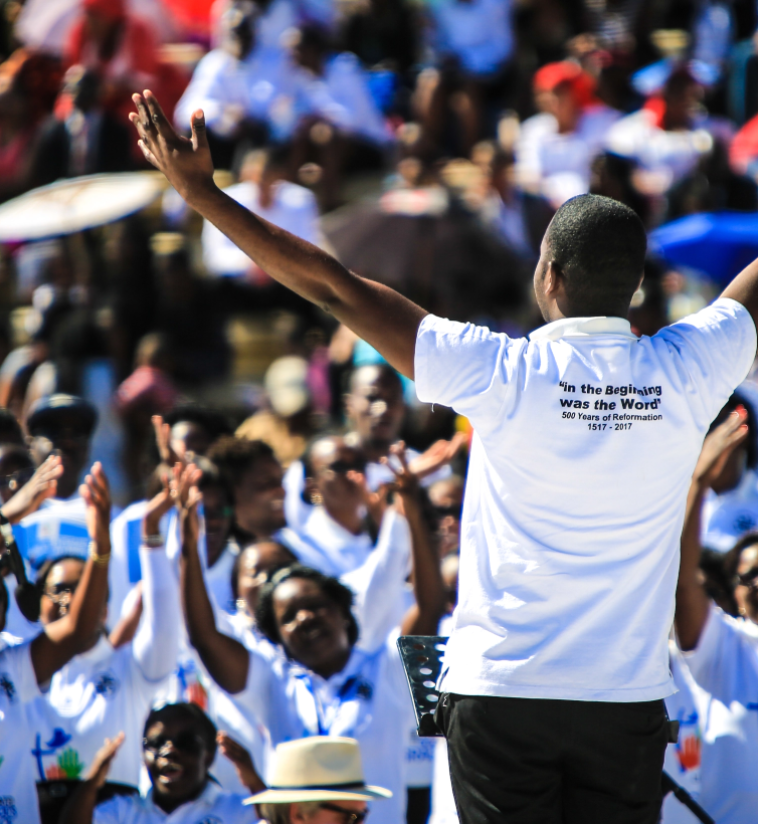 Coming together to set direction for the Communion

The Assembly brings together delegates from all member churches of the communion. The Thirteenth Assembly will take place in Poland in 2023.

Once every six to seven years, delegates from 148 member churches of the Lutheran World Federation (LWF) gather to convene an Assembly, and set the vision and priorities of the communion. This is our highest decision-making body.

As well as determining the direction of the LWF, we examine issues facing our churches, and worship together in a celebration of communion and cultural diversity. As the LWF’s supreme authority, the Assembly is responsible for safeguarding the Constitution, electing its next set of leaders, acting on reports, speaking out on issues concerning the life and witness of member churches, and setting the overall direction for the ensuing period.

Each LWF Assembly is unique. It is shaped by the historical juncture in which it takes place, its venue, and the people who help shape its character, define its purposes and determine its outcomes.

The Thirteenth Assembly of the LWF will take place in Krakow, Poland, in September 2023. It will be hosted by the Evangelical Church of the Augsburg Confession in Poland. The theme of the Assembly is “One Body, One Spirit, One Hope.”

Past Assemblies and Themes

Theme: The Lutheran Church in the World Today

Two hundred voting delegates met in Lund, Sweden, 30 June – 6 July 1947 for the Assembly that marked the LWF’s founding. Many came from bombed cities and countries drawn into the storm of World War II. Armed with the determination to forgive and rethink the vision of “the enemy,” they shared a commitment to seek new ways of living together in Christian communion.

Theme: The Living Word in a Responsible Church

The Second Assembly was held in Hanover, Federal Republic of Germany, 25 July – 3 August 1952. It convened in a city scarred by World War II, but with a will to reconstruct. The LWF was the first large, international organization to meet in Germany after the war and to elect a German as its president.

Delegates took important decisions to strengthen the LWF, opening paths for laity and youth to participate in the life of the communion. The Departments of Theology, World Service and World Missions were established.

The Third Assembly was held in Minneapolis, Minnesota, 15-25 August 1957. Of the 241 delegates, 145 were from Europe, 60 from the United States and Canada, 16 from Asia, seven from Latin America, and five from Africa. In addition, 146 official visitors from member churches attended, as did 125 visitors from non-member churches. Several participants from Eastern Europe took part, despite visa difficulties.

A sense of optimism about the future of institutional religion flavored the Assembly. Delegates shared of struggles in their respective regions: Africans of overcoming colonialism’s legacy in their newly emerging nations; Asians of political opposition; and Europeans of the East-West divide.

The Fourth Assembly was held in Helsinki, Finland, 30 July – 11 August 1963. Opportunity was in the air. Communication was increasing between countries and continents. Technical progress was being made, as evidenced by the broadcasting service, Radio Voice of the Gospel, established by the LWF in Ethiopia. Ecumenical breakthroughs were happening, such as the Second Vatican Council and the LWF’s founding of the forerunner of the Institute for Ecumenical Research in Strasbourg, France. At the same time, the Assembly could not reach agreement on how to express the doctrine of justification in ways that were relevant for “people of today.”

Theme: Sent into the World

The Fifth Assembly, 14-24 July 1970, was the most significant of all LWF Assemblies past and future. Attempts to meet in the German Democratic Republic were blocked by the East German government. Protests about human rights violations in Brazil stalled the first LWF gathering in the global South only five weeks before the opening session.

Moved to Evian, France, the Assembly was shaped by the pivotal role of youth delegates who demanded changes to the traditional ways of working and communicating. Delegates adopted a new LWF structure, passed a resolution on human rights, and recommended pulpit and altar fellowship between member churches.

Theme: In Christ – A New Community

The Sixth Assembly was held in Dar es Salaam, Tanzania, 13-25 June 1977, the first Assembly in Africa and the global South. Issues faced by African churches came to the fore. Delegates identified apartheid in the church in Southern Africa as compromising the integrity of the proclamation of the gospel. They also established a Lutheran perspective on mission, witness and global partnerships in mission. The Assembly moved to create a Youth Desk and laid the foundation for a Women’s Desk.

Theme: In Christ – Hope for the World

The Seventh Assembly was held in Budapest, Hungary, 22 July – 5 August 1984. The venue constituted another milestone: the first LWF Assembly and meeting of a major international Christian organization in the “Second World,” the then Communist countries of Central and Eastern Europe.

Delegates suspended the membership of two white Southern African churches due to their continued failure to end racial division in their churches. Member churches affirmed pulpit and altar fellowship through a constitutional change. The Assembly resolved to ensure an equal number of female Assembly delegates by the Ninth Assembly.

Theme: I Have Heard the Cry of My People

The Eighth Assembly met in Curitiba, Brazil, 29 January – 8 February 1990, the first and long-awaited Assembly in Latin America. It was a time of extraordinary change with the fall of the Berlin Wall and the breakup of the Soviet Union.

Restructuring was at the center of the Assembly as well. Delegates affirmed the LWF’s self-understanding as a “communion of churches,” with significant changes to its constitution. They established equal representation of Southern and Northern member churches on the LWF Council. The Assembly also set a goal of achieving full communion between the Lutheran and Anglican traditions.

Theme: In Christ – Called to Witness

The Ninth Assembly met in Hong Kong, China, 8-16 July 1997, one week after the territory’s transfer of sovereignty by British authorities back to Chinese rule. This first Lutheran global meeting in Asia focused on the celebration of the LWF’s fiftieth anniversary. It set a process in motion for the acceptance by member churches of the Joint Declaration on the Doctrine of Justification between the LWF and the Roman Catholic Church.

For the first time, close to half of the delegates were women. The Assembly reaffirmed the communion’s commitment to women’s ordination, but acknowledged member churches’ varying views on the practice by urging reflection and dialogue.

Theme: For the Healing of the World

The Tenth Assembly was held in Winnipeg, Canada, 21-31 July 2003. Delegates adopted “The Lutheran World Federation – A Communion of Churches” as the LWF’s full name and affirmed regional ecumenical agreements for the first time.

The Assembly theme led to commitments to transform economic globalization; strengthen ministries addressing HIV and AIDS, violence and poverty; and defend the rights of indigenous peoples.

The denial of entry visas for 50 delegates and stewards highlighted the deeper issue of exclusion. Delegates moved to remove any existing barriers to a fully inclusive communion. The Assembly also called on member churches to engage in study and respectful dialogue on marriage, family and human sexuality.

Theme: Give Us Today Our Daily Bread

The Eleventh Assembly was held in Stuttgart, Germany, 10- 27 July 2010. Delegates committed themselves to caring for God’s people and the creation.

They resolved to work for gender and intergenerational justice, food and climate justice, and fairness toward those affected by HIV and AIDS. Emphasis was made on promoting justice for migrants and relief for those who suffer under the severe conditions imposed by illegitimate debt. Assembly delegates affirmed that churches would speak out boldly and prophetically across ecumenical lines and with communities of other faiths.

One of the defining events of the Eleventh Assembly was an act of reconciliation and healing, during which the LWF formally asked the Mennonites for forgiveness for past persecution of Anabaptists, considered as the direct forebears of Mennonites.

The Twelfth Assembly was held in Windhoek, Namibia, 10- 16 May 2017. The LWF issued 26 resolutions calling the communion and its member churches to take action on various issues of concern. And, in three public statements, the Assembly stated LWF’s position on the genocide in Namibia and the German-Namibian reconciliation process, unrest in Venezuela, and politicization of religion in Indonesia.

They gathered around the central theme, Liberated by God’s Grace. A theme which also framed the LWF’s approach to the 500th anniversary of Lutheran Reformation in 2017.

Taking the central theme as the starting point, the Assembly will structured its work around three sub-themes:

These three sub-themes address the contextual challenges the Christian community faces in today’s world. They help to identify certain concepts, attitudes and global policies that people “liberated by God’s grace” reject since they are incompatible with the gospel.

The 12th Assembly outcomes can be found here.

Shaping the spiritual and community life of the Thirteenth Assembly
news

Share with us your stories, photographs and insights using the #LWFAssembly