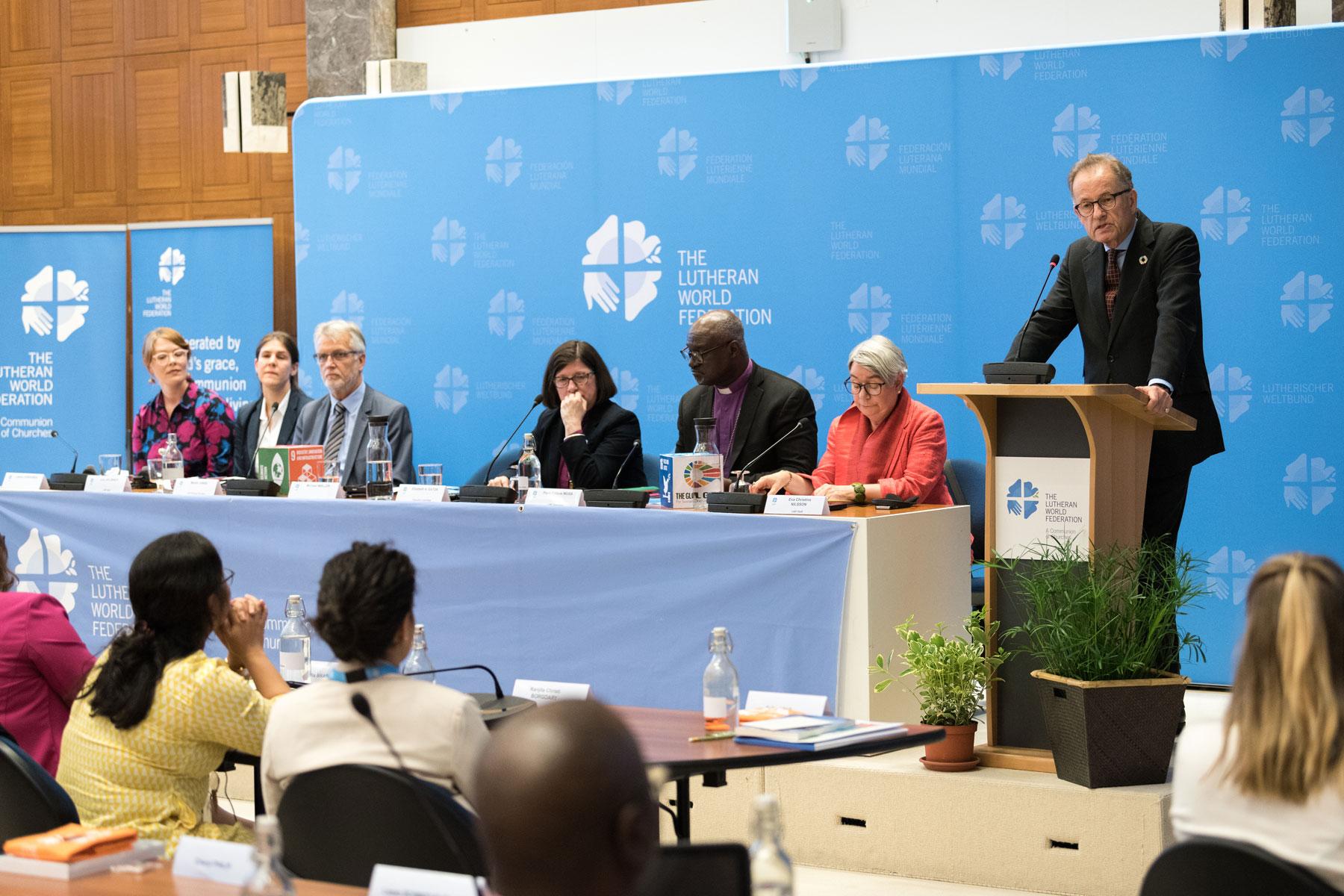 Director General of the United Nations Office at Geneva, Michael MÃ¸ller addresses the launch of the Waking the Giant self-assessment tool on 17 June. Photo: LWF/A.Hillert

(LWI) - The world urgently needs the contribution of Lutheran churches and other faith based organizations if the UN Sustainable Development Goals are to be achieved. That was the message from the Director General of the United Nations Office at Geneva, Michael Møller, to the LWF Council on 17 June, during the launch of an online tool to help churches assess their development, humanitarian and human rights work in light of the UN’s 2030 agenda.

Across the globe, churches and church-related organizations are engaged on the frontlines of education and healthcare, battling poverty and hunger, promoting peace, justice and gender equality. Often this work is carried out in the remotest places where governments and other institutions are absent. Frequently, it provides a lifeline for people and communities continuing to struggle with the effects of disasters or conflict, long after other international aid agencies have moved on.

But not all these churches are aware of just how closely their efforts are aligned with the work of the United Nations, as outlined in the 2030 Agenda of Sustainable Development Goals, or ‘SDGs’. The ‘Waking the Giant’ initiative of the Lutheran World Federation (LWF) was launched in October 2018 to link the churches to that UN Agenda and to further strengthen their work through new partnerships with shared mapping and planning.

Partnership is the ‘red thread’ that must run through all our actions in order to implement the SDGs.

Addressing Lutheran leaders from around the globe, Møller said, “Partnership is the ‘red thread’ that must run through all our actions in order to implement the SDGs.” In a world of “increasing inequality, rising intolerance and erosion of human rights [....] when the idea of multilateralism is put into question,” he said there is an urgent need for a “ multi-stakeholder effort, in which every faith, business, civil society organization, academic institution, media outlet, every citizen, man or woman, old or young have to be active participants”

The UN official added that “The LWF, together with other faith based organizations, is an indispensable partner for the UN” because it is able, “not only to mobilize minds, but also to move hearts and souls” through its network of 148 churches in 99 countries worldwide.

LWF President Archbishop Panti Filibus Musa noted that “churches have historically played an important role in providing social services,” from welcoming the stranger to fighting HIV and AIDS, from combating climate change to promoting women’s rights. Service of those most in need, he said, is “a call grounded in our faith,” a value that is “deeply engrained in our identity.”

‘Waking the Giant’ has already implemented pilot programs in Liberia, Tanzania, Colombia and the U.S. Presiding Bishop Elizabeth Eaton of the Evangelical Lutheran Church in America (ELCA) and an LWF vice president, noted that poverty is a major problem in her country, where “1 in 12 Americans do not know where their next meal is coming from.” She described ways in which the ELCA has been working “to put a distinctly Lutheran lens on the global goals” through advocacy, education and practical self-help projects. ELCA is one of the funding partners of the program, alongside the Church of Sweden, Felm and Bread for the World.

Waking the Giant Program Coordinator Julia Brümmer said the new self-assessment questionnaires are at the heart of an SDG tool box designed to help churches “learn, reflect and act” on how they can work more closely together with other religious bodies, as well as national, regional and international organizations. Churches are encouraged to celebrate the work they are already doing and to share the results in order to develop best practices. A social media campaign has also been launched in order to spread the word as widely as possible.

The project continues to be developed, with more background and training materials being planned. But LWF’s message to its member churches is simple and clear: make use of this practical new tool to strengthen the life-saving work you are already doing and join hands with others to make sure that “no-one is left behind.”

Waking the Giant is a global ecumenical initiative of the Lutheran World Federation. It aims to build the capacity of churches to contribute effectively to the 2030 UN Agenda for Sustainable Development. At the global level, the initiative provides churches and church-related actors with tools and training to relate their on-going work to the Sustainable Development Goals (SDGs). At the national level, churches and ecumenical partners set up implementation mechanisms for taking stock of their existing work in relation to the SDGs and engage in joint planning for direct action and advocacy.