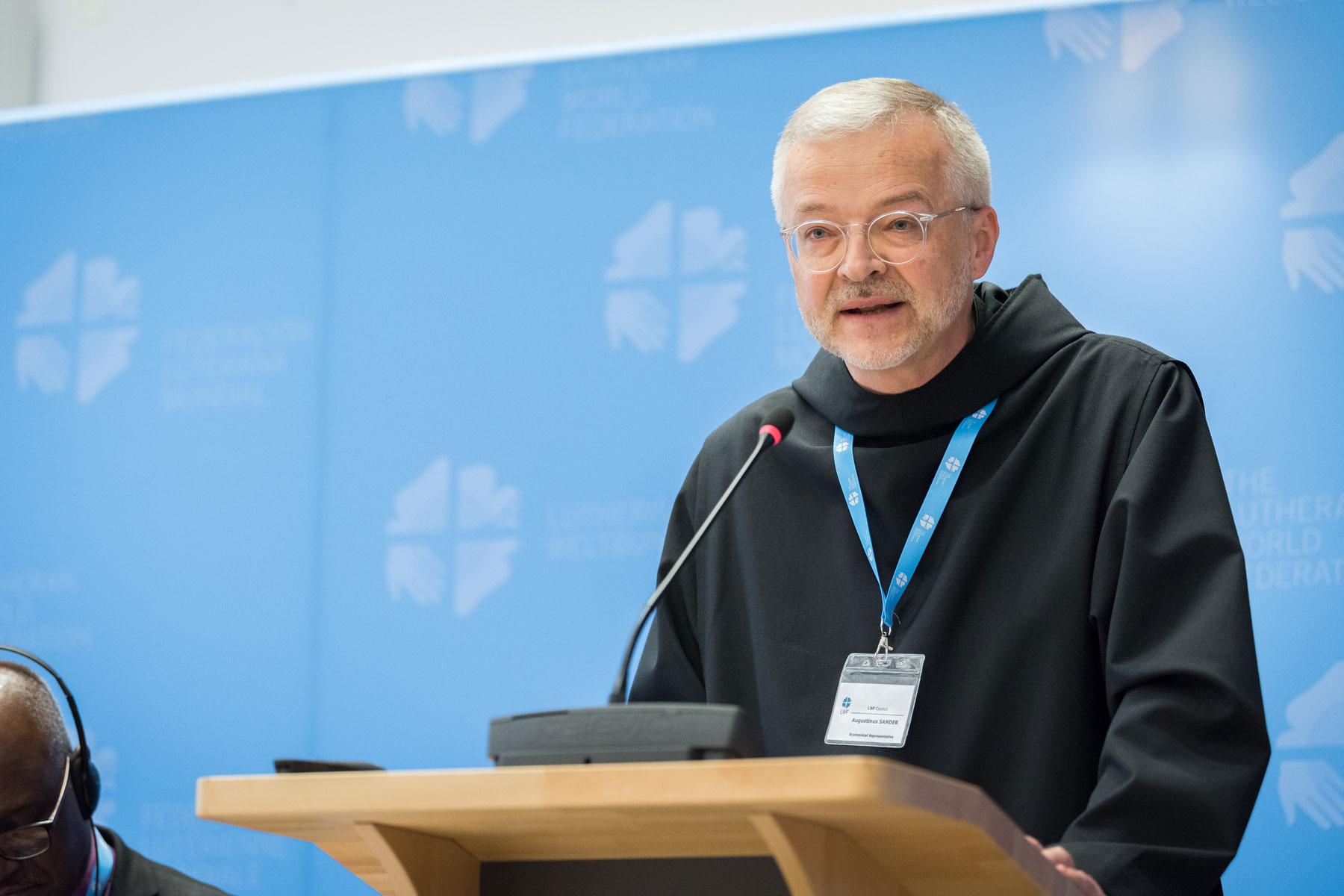 (LWI) - Leaders of global church bodies have thanked The Lutheran World Federation (LWF) for its strong engagement in dialogue among Christians. They affirmed their commitment to continue collaboration in joint efforts to promote Christian unity and confront injustice around the world.

Addressing LWF member church representatives attending the 13-18 June Council meeting, in Geneva, World Council of Churches (WCC) General Secretary Rev. Dr Olav Fykse Tveit commended the LWF for taking “brave steps in showing what God’s voice calls us to do for unity in our time.” He said the 500th anniversary of the Reformation in 2017 “became a celebration of what we share with other churches in our faith in Jesus Christ.”

Referring to the Council theme, Tveit said discerning God’s voice requires careful listening “also to one another” and ensuring that “those who desperately need our response, can hear God’s voice of salvation, of justice and peace – through us.”

The ‘miracle of Lund’

Father Augustinus Sander of the Pontifical Council for Promoting Christian Unity noted that Roman Catholics and Lutherans “have covered decisive stages on the road to greater Catholic-Lutheran community.”

That journey includes what he described as the “miracle of Lund,” when for the first time the two traditions jointly commemorated the Reformation in 2016 in anticipation of the 2017 Reformation anniversary.

Let us not close our ears to the cries of violence and injustice. Let us hear what the Spirit wants to say to the churches today.

Sander urged continuing collaboration for the sake of those on the fringes of society. “Let us not close our ears to the cries of violence and injustice. Let us hear what the Spirit wants to say to the churches today.”

Rev. Dr Chris Ferguson, General Secretary of the World Communion of Reformed Churches (WCRC), said the two traditions “are on a remarkable journey together” through ecumenical configurations developing around the Joint Declaration on the Doctrine of Justification (JDDJ) and the Wittenberg Witness, a common statement signed by the LWF and the WCRC in 2017.

He said the Council theme “speaks to God’s call to address the significant social, political and environmental threats to life” in the different world contexts through greater engagement. “May we continue to work together to confess the God of life in a world fallen among thieves,” Ferguson added.

For his part, Archbishop Dr Josiah Idowu-Fearon, Secretary General of the Anglican Communion, rejoiced in the warm relations between the two communions, which he said are “growing and deepening in many parts of the world.”

He expressed gratitude “for those regions where full communion relationships have already been established, and I pray that we may see similar agreements be established in the coming years.”

Rev. Dr J. Nelson Kraybill, President of the Mennonite World Conference, noted that while Mennonites have in the past, not been closely connected to ecumenical dialogues, today they feel encouraged and inspired to join in the growing search for Christian unity and to overcome the divisions of the past. “We all live in an increasingly polarized and fragmented world. Now more than ever we need each other as global citizen of the reign of God.”

“The work and witness of The Lutheran World Federation continues to inspire us. You are a shining example of what the church can and should do in a bruised and broken world,” said Bishop Ivan M. Abrahams, General Secretary of the World Methodist Council.

“May this Council build upon the great theological contribution, prophetic witness and the moral legacy you have inherited. You stand on the shoulders of giants,” Abrahams added.

Dr Jean Daniel Plüss from the Swiss Pentecostal Mission referred to LWF’s “enduring ecumenical commitment and the fruitful progress” of the Lutheran-Pentecostal dialogue. “I firmly believe that the Holy Spirit is calling the different churches together so that we can learn to be common witnesses of God’s love and grace,” he added.