Call to act on climate-related crises, religious and political injustice 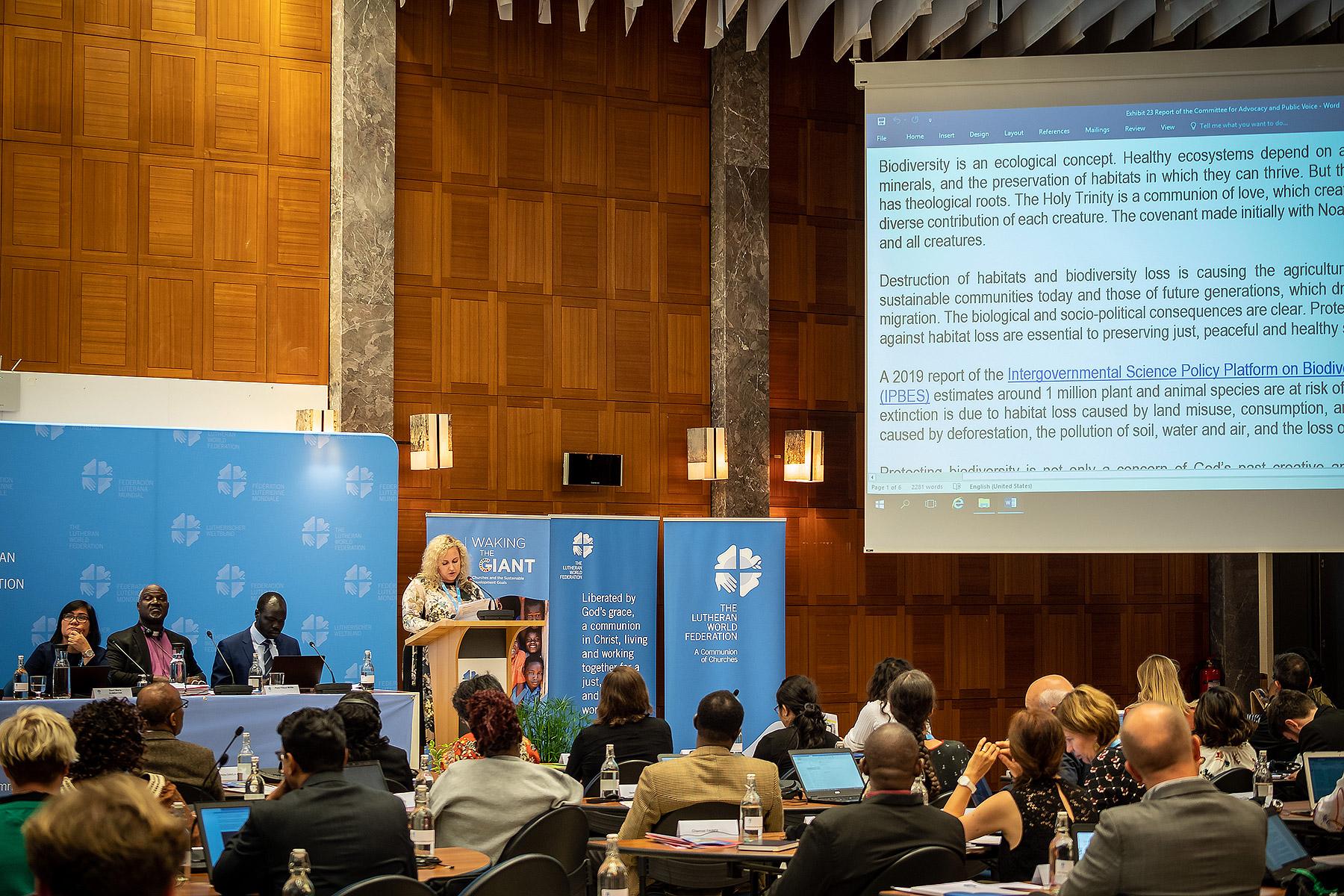 LWF Council members follow discussion on the protection of biodiversity. The report was presented by the Committee for Advocacy and Public Voice chairperson, Ms Vera Tkach, Federation of Evangelical Lutheran Churches in Russia and Other States. Photo: LWF/Albin Hillert

(LWI) - The Lutheran World Federation (LWF) Council concluded its 2019 meeting with public statements and resolutions on crises related to climate change, the Israeli-Palestinian situation, the legacy of slavery and religious persecution around the world.

The Council expressed its “deep sadness over the devastation, human suffering, loss of lives and destruction of livelihoods” caused by the tropical cyclones Idai and Kenneth in Malawi, Mozambique and Zimbabwe in March and April 2019. While acknowledging LWF’s immediate response, the governing body members said they were “troubled” to learn that several months later, many of those affected were still living in temporary settlements without basic needs.

The Council called on LWF member churches and the Communion Office to continue mobilizing “financial, material, psychological and pastoral care for the victims” and organize solidarity visits to the affected churches. The governing body also called for local and international government to provide maximum support for the people affected by the cyclones and “address one of the root causes, which is climate change."

The Council recognized the ongoing problem of people and communities being persecuted on the basis of their faith in many countries, and called upon LWF’s member churches to “advocate for freedom of religion or belief [and] speak out against the abuses of these freedoms.”

It also affirmed the Universal Declaration of Human Rights concerning freedom of religion or belief and reminded churches of the misuse of religion to legitimize oppressive structures and prevent work for justice, especially gender justice. The governing body urged LWF’s member churches to observe the United Nations (UN) international day dedicated to this issue on 22 August.

Referring to the Israeli-Palestinian situation, the Council reiterated its accompaniment to the Evangelical Lutheran Church in Jordan and the Holy Land (ELCJHL), as the LWF member church “brings a message and witness of hope to the people” amid the “current bleak prospects for peace with justice.”

The governing body called upon all LWF’s member churches “to stand in solidarity and prayers” with the ELCJHL. It also urged continued support for the vital ministry of the World Service country program which includes unique health services provided by the Augusta Victoria Hospital and vocational training for Palestinian youth.

On the unresolved conflict, the Council reiterated LWF’s long-held position on “a two-state solution” as repeatedly affirmed in UN resolutions, and assurance for peace and security for both Israelis and Palestinians. It affirmed the status of Jerusalem, as “one city shared by two peoples and three religions”—Christianity, Islam and Judaism.

Through the Council, the LWF urged its member churches to “advocate at key moments for a negotiated two-state solution supported by the international community and based on international humanitarian and human rights law and relevant UN resolutions.”

Commemorating the legacy of slavery

The Council actions included a resolution on the legacy of slavery, related to the Twelfth Assembly sub-theme, “Human beings, not for sale” and the 400th anniversary of the forced transatlantic voyage of enslaved African peoples in 2019. Affirming that “all human beings, their rights and dignity, are not commodities to be traded or sold” the Council called upon LWF member churches to join the global church and international community in activities to commemorate the anniversary.

The Council reiterated the Lutheran communion’s commitment to climate justice in a resolution on the protection of biodiversity, which addressed the theological basis for protecting the integrity of God’s creation. Referring to an intergovernmental report warning of the imminent extinction of around 1 million plant and animal species, the governing body called upon LWF’s member churches to engage in activities that promote habitat conservation.

The Council also called upon the international community to establish a sustainable global economic system that is based “on the integration of creation, steering away from the contemporary exploitative capitalist economic growth model.”