A source of hope towards Christian unity 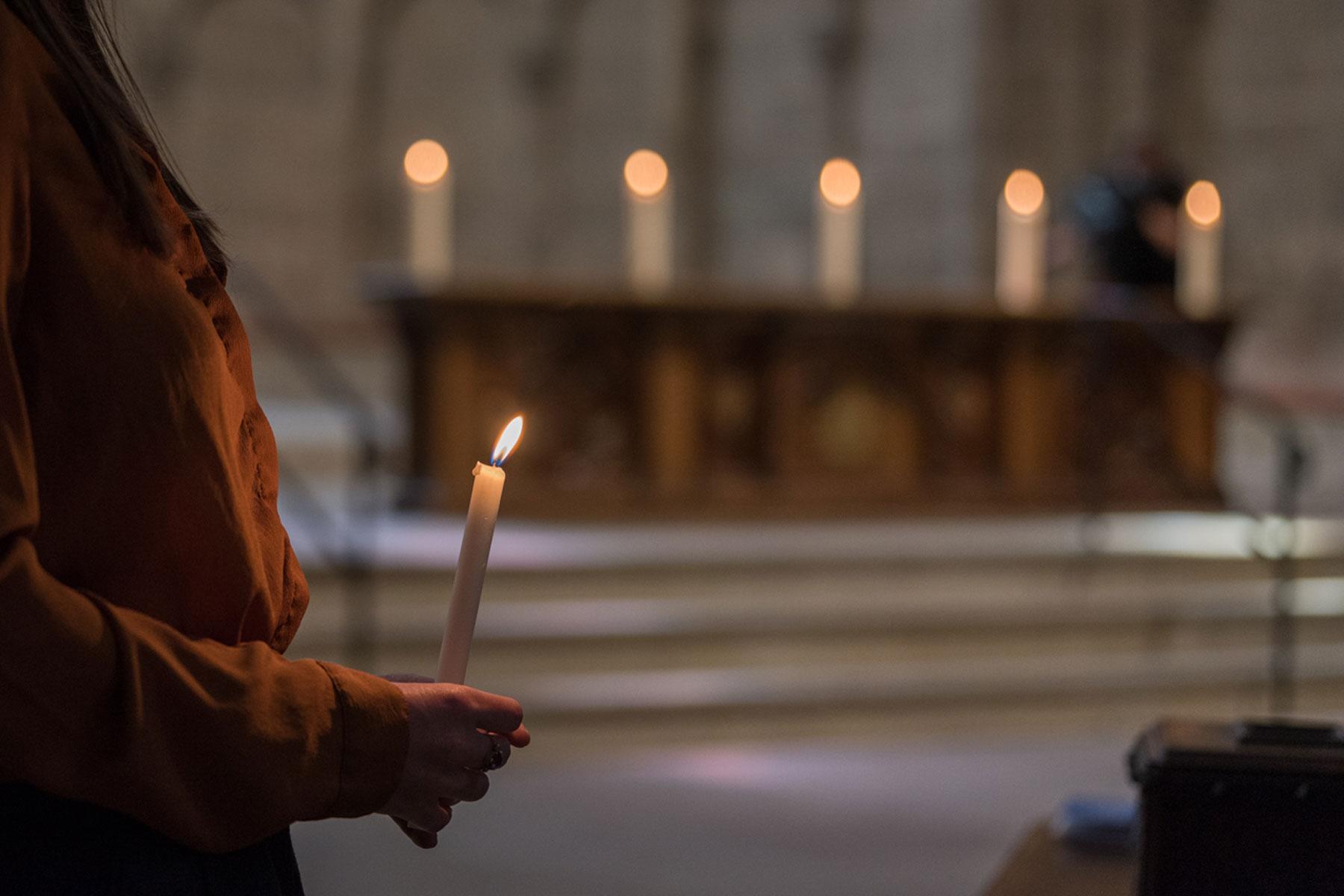 Emma van Dorp lit five symbolic candles on the altar, as the church leaders affirmed the âwish to make more visible our common witness in worship and service, on our journey together towards visible unity.â Photo: LWF/Albin Hillert

“We gather around the font remembering that in baptism we have been incorporated into the one body of Christ,” The Lutheran World Federation (LWF) President Archbishop Dr Panti Filibus Musa, said in his welcome to hundreds of worshippers gathered in the historic cathedral of the Protestant Church of Geneva. The congregation included members of local churches from the five Christian traditions that have affirmed the JDDJ, and representatives of LWF member churches around the world, who are in the city for this year’s Council meeting, 13-18 June.

The JDDJ was signed by the LWF and Roman Catholic Church in 1999. It was a landmark agreement, effectively resolving one of the key theological conflicts of the Reformation, the understanding of salvation. The agreement was subsequently affirmed by the World Methodist Council (WMC), the Anglican Consultative Council, and the World Communion of Reformed Churches (WCRC).

Greeting the congregation, LWF General Secretary Rev. Dr Martin Junge expressed gratitude for the journey the five Christian traditions have “traveled together.” He emphasized: “Our common way of listening to the word of God in Scripture has led to such new insights.”

Quoting the JDDJ, Father Augustinus Sander of the Pontifical Council for Promoting Christian Unity, said, “‘We confess together that all persons depend completely on the saving grace of God for their salvation’.”

MWC General Secretary Bishop Ivan M. Abrahams intoned “the deep connection between forgiveness of sins and making righteous,” and “between justification and sanctification” that has always been crucial for understanding the biblical doctrine of justification.

On behalf of the WCRC, Executive Secretary for Justice and Witness Rev. Philip Vinod Peacock, expressed joy “that the historical doctrinal differences on the doctrine of justification no longer divide us.” He described the joint leadership in the prayer service “as a moment of self-examination, conversion and new commitment to one another manifesting new unity and advancing our common witness for peace and justice.”

Archbishop Dr Josiah Idowu-Fearon, Secretary General of the Anglican Communion said the Anglican Consultative Council “welcomes and affirms the substance of the Joint Declaration on the Doctrine of Justification.”

In his sermon, Rev. Emmanuel Fuchs, president of the Protestant Church of Geneva, reminded the congregation of the greater significance of the JDDJ. He said though the question of justification may appear technical and of interest only to a few specialists, it is as relevant today because, “it concerns the possibilities for the human being to be happy, free and joyful” despite limitations in a world driven by competition and personal achievement. All Christians must remind themselves with conviction of the truly liberating good news that “In Christ, God loves me as I am and that is what gives me the confidence, the strength, the tenacity and the peace to face the world and all its challenges.”

Christianity cannot assert itself without the values of the gospel.

Referring to resurgence of discourses that defend a Christian identity of withdrawal and exclusion, he cautioned that “Christianity cannot assert itself without the values of the gospel” and this message should not be diluted “in order to please or appear more accessible.” The church has no choice but to carry out together the prophetic mission of serving others and especially the most vulnerable, he added.

The liturgy included readings from the March 2019 Notre Dame Consultation Statement by the five ecumenical partners, charting their way forward together. Emma van Dorp, a theology student from the Reformed congregation, lit five symbolic candles on the altar as the church leaders affirmed the “wish to make more visible our common witness in worship and service, on our journey together towards visible unity.”