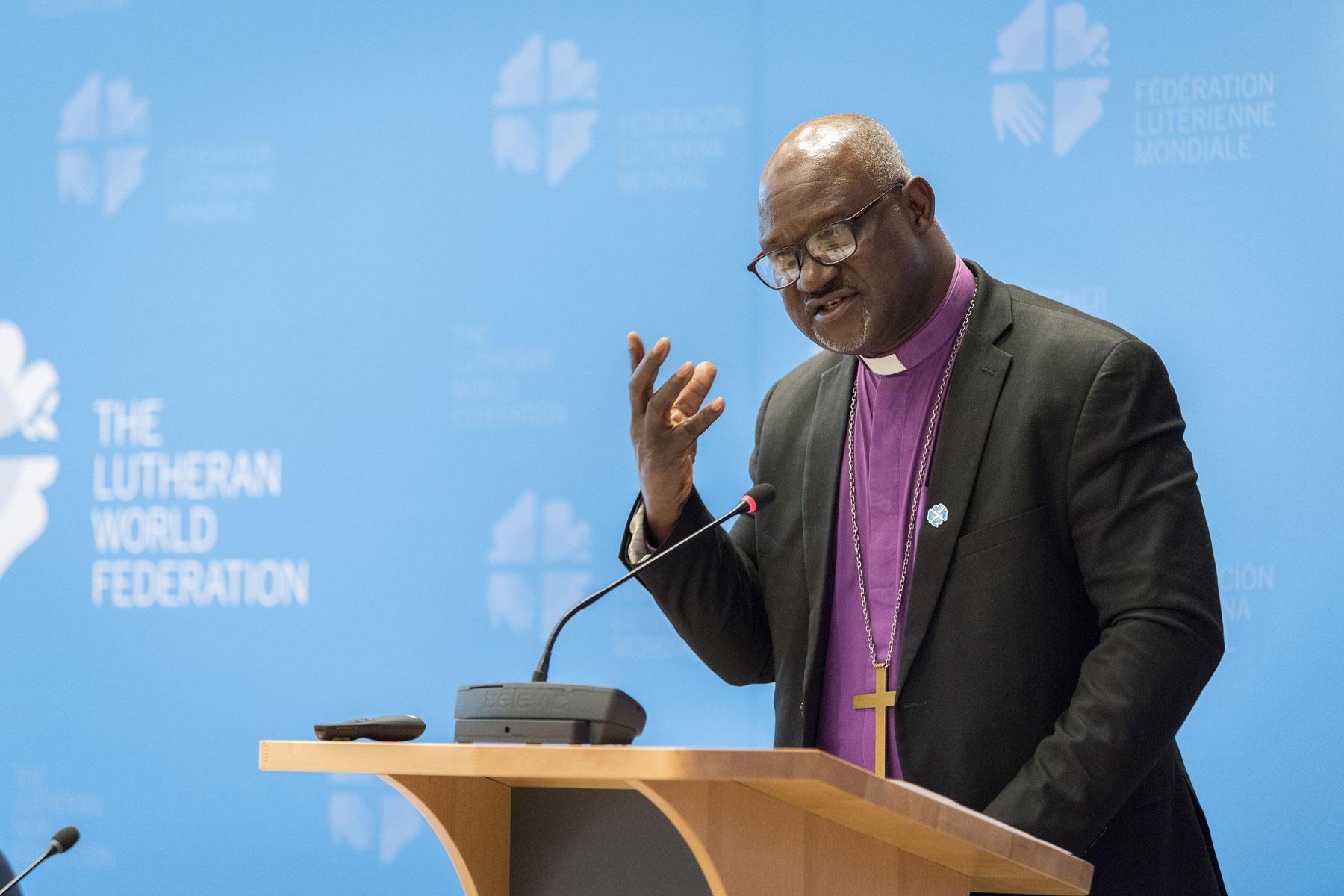 (LWI) - The Lutheran World Federation (LWF) President Archbishop Dr Panti Filibus Musa today opened the 2019 LWF Council meeting with a call for deeper unity among churches and bold witness in a world crying for justice and a creation groaning for healing.

“As people marked and sealed forever by the good shepherd [ …] we must never give up our duty to witness against inequality in society,” and respond to systems that increase the poor’s vulnerability, said Musa, who is the head of the Lutheran Church of Christ in Nigeria (LCCN). “Because we know God’s voice” (John 10:4) was the title of his address, capturing the theme of the 13-18 June Council meeting in Geneva.

Elaborating the Council theme, the president said knowing God’s voice is an affirmation of justification by grace through faith in Christ and reassurance even in the most challenging circumstances. “Even when we have doubts, we can count on the guidance of the Holy Spirit to help us discern God’s voice, what God is up to in the world today.”

As people marked and sealed forever by the good shepherd [ …] we must never give up our duty to witness against inequality in society.

Musa used Jesus’ imagery about the good shepherd’s concern for the sheep both inside and outside the fold to emphasize the implications of LWF’s self-understanding of mission and living out faith in the world. Like the church of Jesus Christ, which is never for self-justification, and following in the footsteps of those who founded the LWF, “withdrawal unto ourselves and showing concern only for our own welfare is never a choice,” the president said.

The LCCN archbishop reminded the LWF member church representatives of Christians’ shared space with others and of the vocation to engage theologically and practically with other religions to promote peace. He challenged the Lutheran communion to uphold its integral calling to address the “suffering of our neighbors” including those who are persecuted because of their faith, even when such prophetic witness “often comes with great risk.”

Commitment to witness and serve together

The president’s address highlighted milestones of LWF’s long-standing commitment to the search for Christian unity within the communion and with other ecumenical partners, and the joint service with others to alleviate suffering. He expressed gratitude for the “profound witness” of “our unity” in a world where it is easier to sever ties and relationships, but also called for “stronger and more efficacious” collective voices against all forms of injustice.

A highlight of this year’s meeting is a celebration of the 20th anniversary of the Joint Declaration on the Doctrine of Justification (JDDJ), the ecumenical agreement originally signed by the LWF and the Roman Catholic Church in 1999. The JDDJ has since been affirmed by Methodists, Anglicans, and the Reformed, making it a shared ecumenical commitment by five global church bodies to witness together and to collaborate in serving people in need around the world. “This is a very significant ecumenical milestone in our journey from conflict to communion,” Musa said.

Responding to creation’s cry for healing

Turning to some of the thematic areas elaborated in the LWF Strategy 2019-2024, the president reminded the Council of the call to be good stewards of God’s creation and to hear its cry for healing. “Creation is groaning through environmental degradation; its impact is catastrophic, with devastating cyclones, floods and droughts,” a crisis that demands dramatic intervention. He expressed deep gratitude for the LWF’s work on climate justice and applauded youth around the communion for taking leadership as advocates for climate justice in many ways.

Referring to the Luther Garden in Wittenberg, Germany, a living monument of 500 trees planted by churches from all world regions to commemorate the 500th anniversary of the Reformation in 2017, the LWF president said this should not be remembered only as an event of the global commemoration. It should “be a signpost to remind and inspire ongoing reformation, including listening to the groaning of creation,” he stressed.

Gratitude for stewardship of LWF’s resources

Musa reminded the LWF Council members of their role also as stewards of the resources availed to the LWF Communion Office (CO) and its work, and thanked them for “our collaborative spirit and commitment concerning our growth as a communion of churches and our witness in the world.” He also thanked the CO staff under the leadership of General Secretary Rev. Dr Martin Junge for their commitment in implementing Council decisions.

Referring to the changes around churches globally, and implications on the global communion of churches, the LWF President emphasized that “we can venture into the unknown and we can make very difficult decisions,” as people who “know God’s voice,” walk by faith, and trust the “‘Good Shepherd’ for leadership, guidance and protection.”

He concluded his address with emphasis that it is God’s voice that “also calls us to the slums, to the wounded, to the marginalized and so many depressed and hopeless neighbors.”