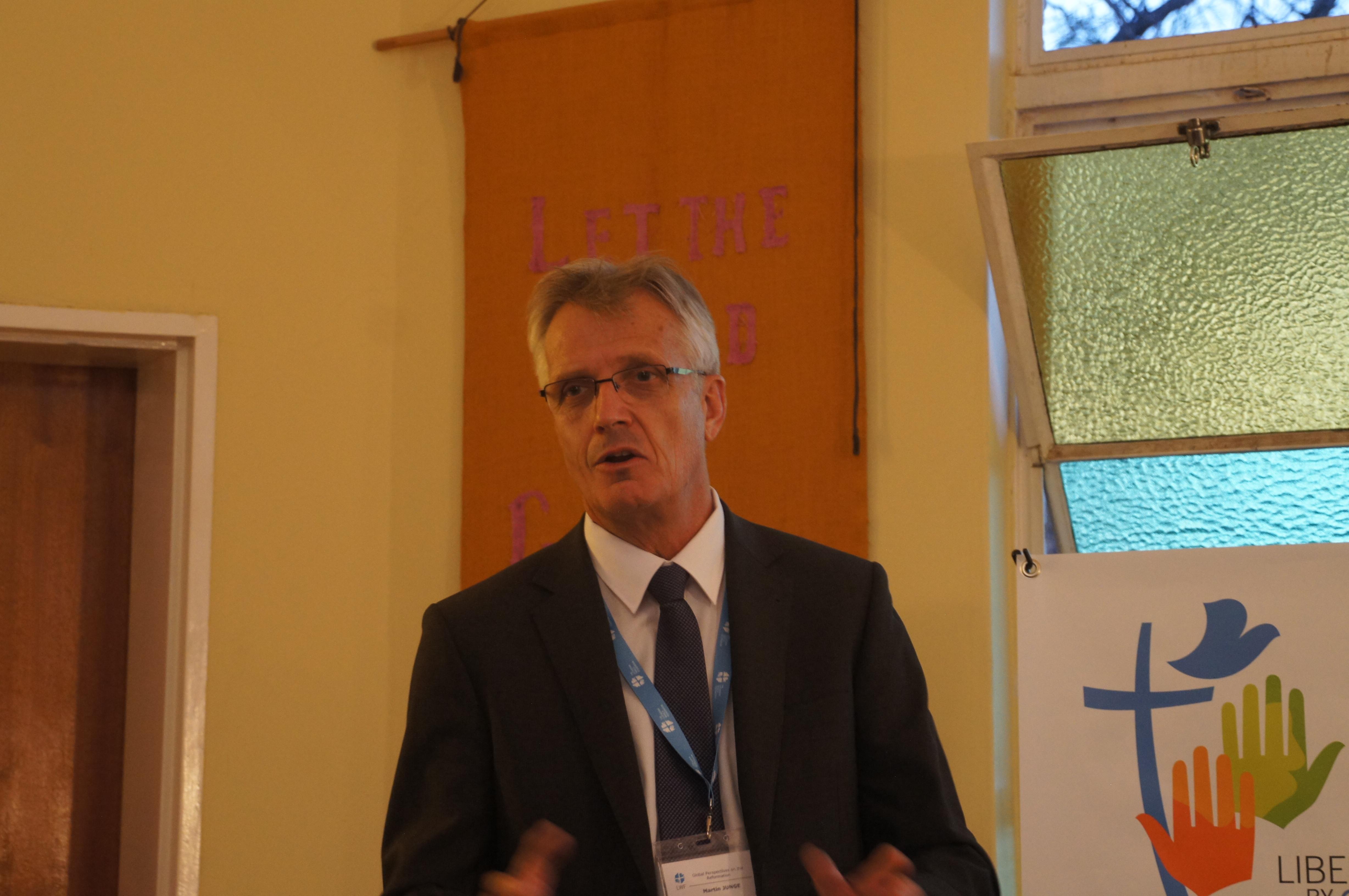 WINDHOEK, Namibia/GENEVA, 29 October 2015 (LWI) – The global nature of Lutheran Reformation calls for theological articulation that helps churches to challenge contemporary issues in a world that is increasingly marked by merciless competition, struggles for survival and exclusion.

The Lutheran World Federation (LWF) General Secretary Rev. Dr Martin Junge made this appeal to theologians from around the world meeting in the Namibian capital.

A world that never hears of grace must of necessity be graceless and will only seek salvation in merciless competition, he said. “Very few can survive such merciless competition,” he stated in his keynote presentation at the official opening of the 28 October -1 November global LWF gathering, which is looking at how theological insights relate to politics and economics as churches prepare to mark 500 years of the Reformation in 2017.

Junge recalled that Martin Luther’s theological insight of justification by faith alone had been developed through rigorous theological research. Once his insight connected with a pastoral and diaconal concern for people, it became projected into the public space. “Luther saw people, some of them terribly poor and marginalized, offering their little coins for a bit of peace in their hearts – at least for the life after life, given that their current life was just a torment and a nightmare with no end in sight.”

The general secretary challenged conference participants to uphold the importance of freedom as a key insight of Lutheran Reformation. “Churches in the Reformation tradition are churches of grace and freedom, both at the same time. Anyone in this tradition who talks of justification by God’s faith alone will constantly and in the same breath want to talk of freedom,” he noted.

He underlined that freedom in the theological tradition of Lutheran Reformation is never autistic or autonomous, but accountable and responsible. “Freedom, as given by God, finds its full expression in entering into – and protecting – relationships.” According to Luther’s understanding, freedom will find its boundaries in the neighbor, particularly where the neighbor suffers.

Referring to the unprecedented challenge of climate change, he stressed that the current ecological devastation is an expression of a wrong understanding of freedom. This makes our current generation think that it got the freedom to use the resources of future generations, or of some countries and societies to use up the resources which belong to all.

“What Lutheran theology in the 16th century could not yet see, but what needs to be articulated more fully today in the spirit of an ongoing Reformation, is the insight that human freedom, as given by God, will direct its relational commitment not only to the suffering neighbor but also to God’s groaning creation,” Junge added.

The conference began with an opening worship at which Namibian Bishop emeritus Dr Zephania Kameeta preached. In his sermon, the retired bishop of the Evangelical Lutheran Church in the Republic of Namibia, who is also the Minister of Poverty Eradication and Social Welfare, emphasized that faith that does not make things new and liberate other people is not faith. He said the diaconal calling of the church and mutual encouragement in the journey of faith must be an integral part of commemorating the Lutheran Reformation.

The conference continues to look at dimensions of the law and the gospel, human dignity, gender justice and theological education among others, under the theme “Global Perspectives on the Reformation – Interactions between Theology, Politics and Economics.”

The opening on 28 October was held at the Paulinum United Lutheran Theological Seminary which is run by the three Lutheran churches in Namibia. The churches will jointly host the Twelfth Assembly of the LWF in 2017 and the 500th Reformation celebration.