Global Commemoration of the 500th Anniversary of the Reformation attended by thousands in Windhoek, Namibia 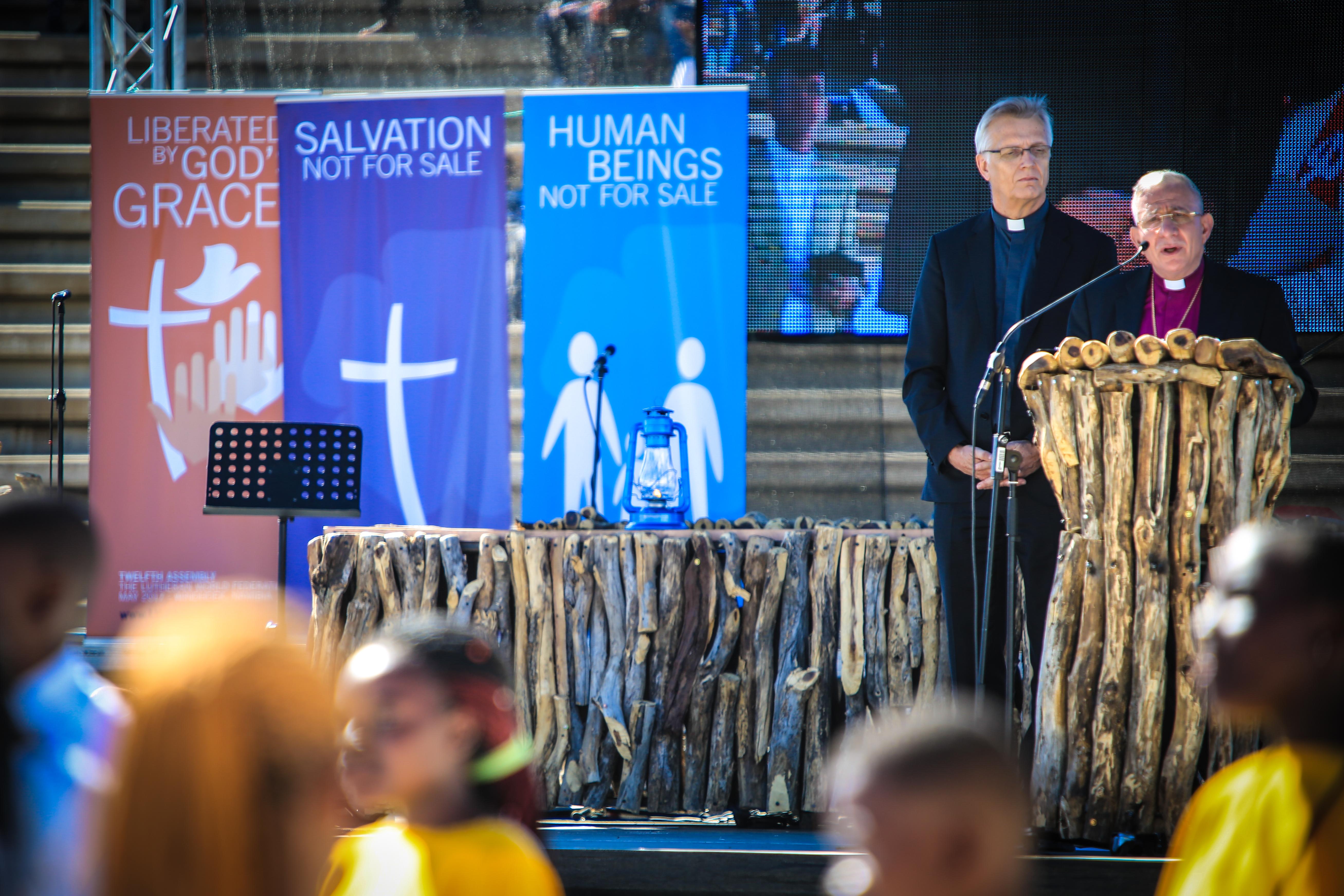 Global Commemoration of the 500th Anniversary of the Reformation - highpoint of the Twelfth Assembly of the Lutheran World Federation in Windhoek, Namibia. Photo: LWF/JC Valeriano

Called to be “reformed and reformers, renewed and renewing, liberated and liberating”

Lutherans from around the world and ecumenical guests gathered at the Sam Nujoma stadium, in Windhoek, Namibia for the global commemoration of the 500th anniversary of the Reformation. Delegates and participants from the LWF Assembly attended the commemoration with thousands of Lutherans from Namibia and neighboring countries.

“What we need now is not the justification of the wrongs of the past, but that God in his grace, blot out all our iniquity, and create in our world pure hearts of love, justice and peace,” said Namibian bishop emeritus Zephania Kameeta in his sermon. He offered a message of hope and liberation, giving substance to the Assembly theme Liberated by God’s Grace.

The commemoration event is a highpoint of the Twelfth Assembly of the Lutheran World Federation, which takes place in the Namibian capital Windhoek from 10-16 May.

A perspective of unity

“We engage a spiritual and theological challenge: telling our story from the perspective of unity, not division,” said LWF President Bishop Munib A Younan in his welcoming words. “And now today, here in Namibia, all of us together, we are a sign that the Reformation is indeed ongoing and a global citizen.”

“Here are stories of encouragement and inspiration. As we listen, we remember the beginnings of faith: we are made new through baptism, washed in the waters of regeneration. We give thanks to God who calls us in this time and place to be God’s people full of grace and truth.”

The seven testimonies were offered by Magnea Sverrisdóttir on behalf of the Nordic region, Ranjita Christie Borgoary for the Asia region, Yonas Yigezu Dibisa for the Africa region, Robert Granke for North America, Vera Tkach for Central Eastern Europe, José Pilar Álvarez Cabrera for the Latin America and the Caribbean region and Julia Braband for Central Western Europe.

‘No justification of past wrongs’

Bishop Kameeta played a key role in Namibia’s struggle for liberation. In his sermon he told of the hope spread by the gospel in the liberation struggle. “We will not give up and will never quit, because we firmly believe that hatred, violence, greed, the growing gap between rich and poor, abject poverty, injustice, exploitation, terrorism, extremism, discrimination and death, do not have the last word.” He called on those present to witness to being liberated by God’s grace:

Dear sisters and brothers who are commemorating 500 years of the Reformation, let us go out from here with this liberating truth, our Lord Jesus Christ, to be reformed and reformers, renewed and renewing, liberated and liberating and to live lives in which people see and experience grace, love, justice, unity and peace.

Parishioners from the three LWF member churches in Namibia participated in the Sunday service. They were joined by Lutherans from Namibia’s neighboring countries, including South Africa and Zimbabwe.

The stadium where the commemoration service took place is in Katutura, which in the apartheid era was a township established for black people, where they were forced to relocate from elsewhere in Windhoek.

Ecumenical representatives from all over the globe joined in reading prayers for the service, made vibrant by the music of several choirs from Lutheran congregations in Namibia. Thousands of worshippers lined up at fifty communion stations in the stadium to receive the Eucharist. “This large, international group of worshippers more than anything shows how the church is alive, and the Reformation is ongoing,” said LWF General Secretary Martin Junge.

Global Commemoration of the 500th anniversary of the Reformation
news