A community of love 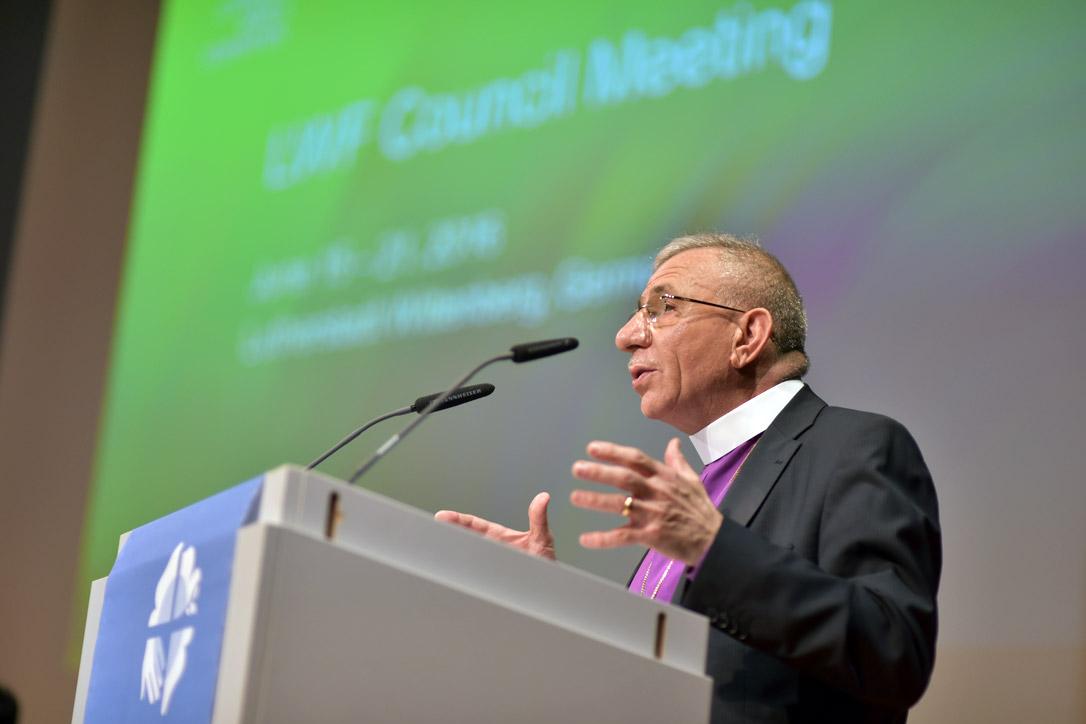 “The crises facing the world demand more than our politeness; they demand our action. But we cannot act fully without interrogating our foundational assumptions and motivations,” Younan told LWF Council members at this year’s meeting, taking place in Wittenberg, Germany, 15-21 June.

“We need to speak clearly with one another, naming the truth as we perceive it. While politeness has its place, the quest for ‘civility’ can harm the purpose of our common speech,” he said. His address titled, A Community of Love, invited the LWF member church delegates to critically reflect on Lutheran self-understanding about church leadership, mutual participation in God’s mission, prophetic diakonia amidst growing xenophobia globally, and preparations for the Twelfth Assembly in 2017 and marking the 500 years of the Reformation.

Younan, bishop of the Evangelical Lutheran Church in Jordan and the Holy Land, said the purpose of honest critique in the LWF was “not to close off the possibility of communion, but to build one another up.” He encouraged theological education to create awareness and better understanding about issues such as colonial pasts and practices, and how structural inequalities and injustices relate to the financial pressure facing historic church donors and recipients.

It was important to have “a clear understanding that our relationship is grounded not in money but in something far deeper, far greater—God’s own love manifested in God’s grace. In this communion of love, we are called to mutual responsibility for the good of the other,” he stressed.

He noted it was essential to collectively study again Lutheran understanding about the nature and purpose of the office of episcopacy, especially in a global Christian context that increasingly profiles material success. Questions on ecclesiology that require further interrogation include the role and power of episcopal leaders (bishops o presidents), Younan said.

The authority of bishops like all pastors, is subject to the loving, liberating command of Lutherans’ ultimate authority - the gospel. It is a reminder of the power that resides in the people rather than in the bishop’s office alone. “If we return to this understanding of our central confession, our church would be guided by an episcope of love," Younan emphasized.

He said the goal of forming a community of love is today challenged by the rise of xenophobia, of which the most worrisome form is religiously-sanctioned extremism that threatens reasonable response to human suffering. This is evident in the North Atlantic with some groups in Europe for example, openly opposed to “refugees streaming out of Syria and Iraq as they see them as coming to take a portion of European bread.”

In South Africa, a trait of ethnic domination is evident among so-called economic freedom fighters, advocating state benefits only for black citizens, while in India there are troubling reports of attacks on African residents. Younan challenged the Lutheran communion to define its role in confronting such forms of xenophobia.

He thanked the member churches, “down to every congregation” for their collective support towards LWF’s assistance to more than 2.3 million refugees and other displaced people. He underlined the need to continue this legacy of service as “our expression of love.”

Younan however noted that some people wondered why LWF’s service to refugees is not directed first at Lutherans and other Christians, and was instead catering to all human being irrespective of religious identification, gender, ethnicity or political affiliation. “This is the very strength of our holistic mission, including our prophetic diakonia. Our aim is to help humanity; in responding to human vulnerability.”

He added that when the current political crisis erupted in Iraq and Syria, its impact did not distinguish between Christians, Muslims and Yazidis, atheist and agnostics. “Our global refugee crisis is a human crisis.”

LWF churches also have a responsibility to engage with other religious communities and promote co-existence, respect and dignity among people of diverse backgrounds and faiths. Younan commended efforts by many networks around the world “working prophetically, swimming against the growing tide of extremism.” Groups such as Jordan’s Royal Committee, which awards prizes for peace efforts during the annual Interfaith Harmony Week, help to build “communities of love far beyond the boundaries of Lutherans or Christians alone.”

He also called for support toward leaders and institutions in the Muslim world, working to confront extremism through collective advocacy for robust moderation. Referring to the Marrakesh Declaration on the status of religious minorities, he said such “initiatives are far more effective than bombs and invasions.”

On preparations for the Twelfth Assembly of the LWF in 2017 and commemorations to mark 500 years of the Reformation, Younan called for attitudes that communicate God’s love.

He said the good preparations towards the joint ecumenical commemoration by Lutherans and Catholics in Lund and Malmö, Sweden, this October, and the events around the Lutheran communion next year should not be seen as occasion for triumphalism, competition or jealousy. “This is a time to show our unity and love to each other even as we respect our continued differences.”

The commemorations, Younan added, provide an opportunity “to plan a future for our community of love, asking what is calling us for the next 50 years” of ecumenical partnerships.

“Grounded in God’s love – discerning God’s future” is the theme of this year’s meeting. Younan thanked the LWF German National Committee for hosting the Council meeting and for the opportunity to connect together again to the city from which the “message of the freshness of the Gospel emerged” in the 16th century.

He said Germany’s profound history has some lessons for the contemporary world. The 1990s fall of the Berlin wall, ending division between the then East and West and creating a new strong state, showed it is possible to have political orders that embrace diversity. In the decades since the War, German churches and society have rejected anti-Semitism and forged relationships, from which many other countries have learned. The country’s commitment to serve refugees stems out of Germans’ own displacement in the 1940s. “Today, German society knowing the terror of war and the pain of displacement, is accepting refugees,” he added.

With deep roots in history, we reach out to God’s future
news
tt
test news