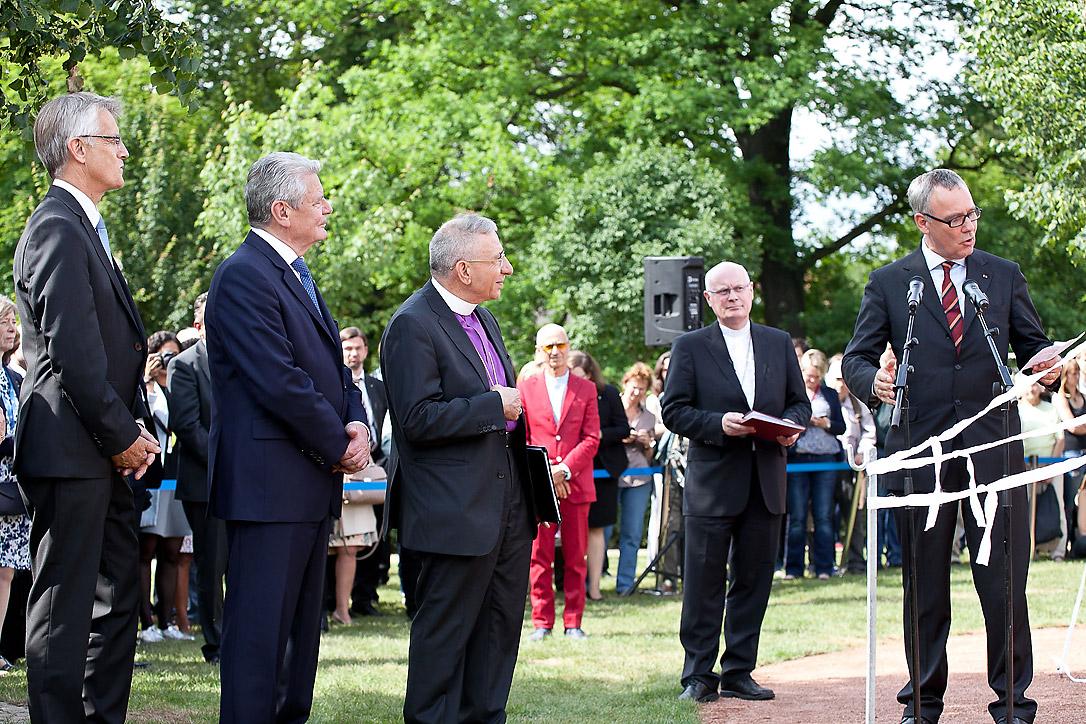 Luther Garden architect Andreas Kipar, right, explains the elements of the art installation, Heavenly Cross, moments before it is unveiled. Looking on are LWF General Secretary Martin Junge, left, German President Joachim Gauck, LWF President Bishop Dr Munib A. Younan and General Secretary of the German National Committee of the LWF, Norbert Denecke, during the unveiling of the Heavenly Cross in the Luther Garden in Wittenberg, Germany. Photo: LWF/Marko Schoeneberg

During the festive event, Gauck, LWF President Bishop Dr Munib A. Younan and General Secretary Rev. Dr Martin Junge unveiled the artwork which is made from aluminium and stainless steel, and consists of a triple cross construction. The Luther Garden, a living, growing monument to mark the 500th anniversary of the Reformation, is jointly managed by the LWF and the City of Wittenberg.

Heavenly Cross, by German artist Thomas Schönauer, consists of three overlapping crosses. The structure is 15 meters long, 11 meters wide and over 4.5 meters high. It is framed on the ground by a heart and grass patch in the shape of five petals. The shape resembles the Luther rose, the seal of Martin Luther. It covers a 40 meter wide central space in the Luther Garden.

The sculpture connects the earth to the trees growing towards heaven, Schönauer explained. It is supposed to increase “personal strength and responsibility to consciously shape a respectful life together and a livable future.”

Lord Mayor of Leipzig Burkhard Jung, representing one of the main sponsors of the artwork, Stiftung Lebendige Stadt (Living City Foundation), concurred. He described the Luther Garden as a green oasis offering “opportunity to move away from daily life for a moment and pointing beyond the human.” Jung said, “The Luther Garden makes the city more alive – in precisely the spirit of the Stiftung Lebendige Stadt. We are pleased to have been able to contribute to creating it.”

LWF President Bishop Dr Munib A. Younan underlined the symbolism of the multi-facetted work of art. The shape of the Luther rose “reminds each of us that we are all children of God liberated by God’s grace.” Turning to Gauck, he stated, “We are proud to walk with the president of the Federal Republic of Germany on the road of Reformation.”

LWF German National Committee (GNC/LWF) general secretary Oberkirchenrat Norbert Denecke concluded the ceremony by thanking Schönauer, the City of Wittenberg, sponsors, donors and the construction companies. He paid special tribute to the Aluminium Rheinfelden company, the Stiftung Lebendige Stadt, the Evangelische Bank and the regional Protestant churches for their financial support of the project.

The art installation in the Luther rose completes the Luther Garden along the embankments south of the Castle Church, where Reformer Martin Luther nailed his 95 theses, starting the 16th century movement to reform the church. Since 2009, churches from all denominations have planted 292 trees here “as a sign of solidarity, connectedness and church reconciliation worldwide,” said the landscape architect Dr Andreas Kipar. Tree-planting occurs at two other locations in Wittenberg. The goal is to plant 500 trees in the garden by 2017.

LWF Council members witnessed the unveiling ceremony, which was held after the opening worship of the governance meeting.

The LWF Council meeting is taking place from 15 to 21 June in Wittenberg, Germany. The Council meets once a year and is made up of 49 delegates from the member churches in the seven LWF regions. With both ordained and lay members, it has three categories of delegates: 40 percent women, 40 percent men and 20 percent young adults. The nearly 120 participants at this year’s meeting include invited ecumenical guests and other LWF member church representatives, as well as staff from the Communion Office.

Meeting in the historic German town of Lutherstadt Wittenberg, the 49 members of the LWF Council from member churches around the world are holding their annual governance meeting. The Council oversees the work of the LWF between Assemblies. This year’s meeting theme is Grounded in God’s love - discerning God’s future. It is the last of the present Council before the LWF Assembly next year, at which a new Council will be formed.

Read more about the Council meeting

Pilgrims on the way to Wittenberg: a documentary in photos
news