With deep roots in history, we reach out to God’s future 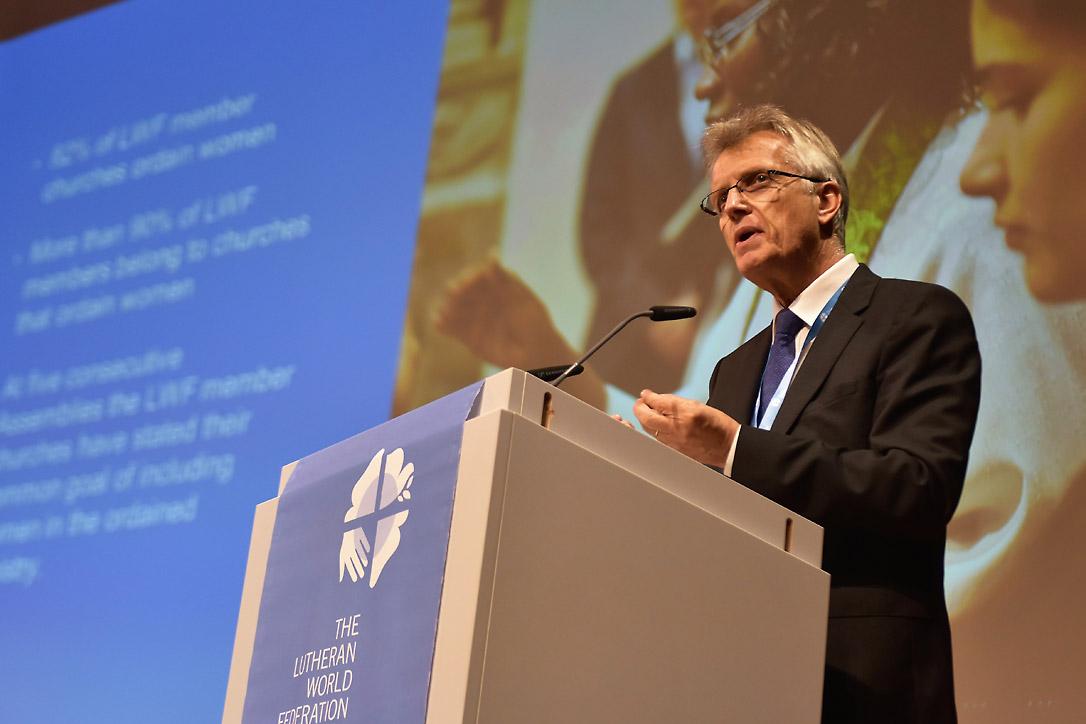 (LWI) – Collaboration among The Lutheran World Federation (LWF) member churches makes them powerful advocates of peace, justice and reconciliation in a world facing frightening levels of violence, mistrust, radicalization and breakdown of relationships”, General Secretary Rev. Dr Martin Junge told the organization’s governing body as it began its 2016 meeting in Wittenberg, the city of Lutheran Reformation.

“‘To be Lutheran is to be diaconal,” Junge underlined in his report today to the LWF Council, meeting until 21 June. He highlighted LWF’s activities over the past year that affirm the need for greater advocacy and closer collaboration among the communion’s 145 member churches in order to serve people in need and further the goal of church unity.

“Cooperation on the basis of a sense of solidarity can no longer be taken for granted,” he said referring to growing discord in communities, nations and regional structures including the European Union and the United Nations (UN). He cautioned churches against easily getting caught in replicating, amplifying and serving such negative manifestations.

Junge thanked church leaders across Europe for their unwavering support to people fleeing conflict, violence and unbearable inequalities across the world, despite lack of political will to adequately respond. “Many of them stood firmly and unequivocally on the side of those needing protection and support.” At the same time, the LWF expanded its humanitarian assistance to the unprecedented 2.3 million refugees and other forcibly displaced persons globally.

His report highlighted areas of LWF’s work that had proved the value of faith-based organizations’ collaboration with the UN and its agencies. Cooperation with ACT Alliance and the World Council of Churches at the December 2015 UN climate conference, COP 21, in Paris, strengthened advocacy with other faith-based and civil society organizations for a fair climate agreement.

The LWF will seek similar partnerships to mobilize resources to implement the 2030 UN sustainable development goals. This includes working towards achieving gender equality, for which the LWF is uniquely placed, having developed a Gender Justice Policy that has been translated into 19 languages and adapted to local situations, Junge said.

The 2016 Council meeting is the last full gathering of the LWF annual governing body before the Twelfth Assembly in May 2017 and commemorations to mark 500 years of the Reformation. The general secretary emphasized the Lutheran communion’s commitment to mark the anniversary globally and in a spirit of ecumenical accountability through various projects and activities.

The joint commemoration of the Reformation by Catholics and Lutherans in the Cathedral of Lund, and in Malmö, Sweden, on 31 October 2016 will be a major highlight. The event’s co-hosting by LWF President Bishop Dr Munib Younan and the General Secretary, and Pope Francis from the Catholic side “represents indeed a historic turning point in our relationships in view of the clear commitment to leave conflict behind and open up to the communion that God invites us for and holds prepared for us, while dealing with differences that remain,” Junge said.

He shared his excitement about the two-step commemoration based on a common prayer and public witness for deeper diaconal service cooperation between LWF World Service and Caritas Internationalis. He thanked the Church of Sweden and the Catholic Diocese of Stockholm for the local hosting of the event.

Other positive ecumenical signs for the LWF include the Anglicans’ affirmation of the Joint Declaration on the Doctrine of Justification (JDDJ) in April, ongoing consultation on the JDDJ by the World Communion of Reformed Churches, and a follow-up report on the 2010 reconciliation action between Lutherans and Mennonites.

Junge pointed out that the Eucharist as the most concrete and tangible expression of baptism, was still the one issue around which mutual hospitality with the Catholic Church was not possible. “It should remain the pivotal focus of our ecumenical interaction,” he emphasized.

The general secretary expressed gratitude to the Namibian churches for the launch of local preparations for the Twelfth Assembly early June, and underlined LWF’s vision of a “joyful, transformative, forward-looking and outward looking assembly.”

Looking beyond 2017, he invited Council members to reflect on a possible communion-wide framework for other 500-years’ milestones that would help to articulate Lutheran theological identity and witness and enhance mutual understanding on the continuation of ecumenical dialogues.

The general secretary reported that a statistical survey of the 145 LWF member churches shows global growth from 71 million Lutheran Christians in 2013 to 73 million today. For the first time the largest LWF member churches are in the global South: Ethiopia and Tanzania, while churches in the global North reported a decline. He noted the LWF plans a global consultation on mission to reposition itself for the challenges and tasks of the Lutheran communion.

Junge affirmed LWF’s commitment to women’s participation in ordained ministry, which has been stated at five consecutive Assemblies. Referring to a recent survey, he noted, 82 percent of the member churches ordain women and a number of churches are discussing the issue. The journey towards this goal has been one of mutual understanding and solidarity in view of different timings and processes observed by each church”. He emphasized there could be no imposition, either to ordain or not ordain women. He expressed disappointment over the departure of the Evangelical Lutheran Church in Latvia from this shared journey and common practice among LWF member churches.

Junge thanked the LWF German National Committee and the Evangelical Church in Central Germany for the generous hosting of the Council meeting. He also paid tribute to the commitment of former Council member, Danish Bishop em. Niels Henrik Arendt, who passed away in August 2015.

Council members will discuss the Report of the General Secretary  in plenary and committee sessions and offer recommendations on key issues.