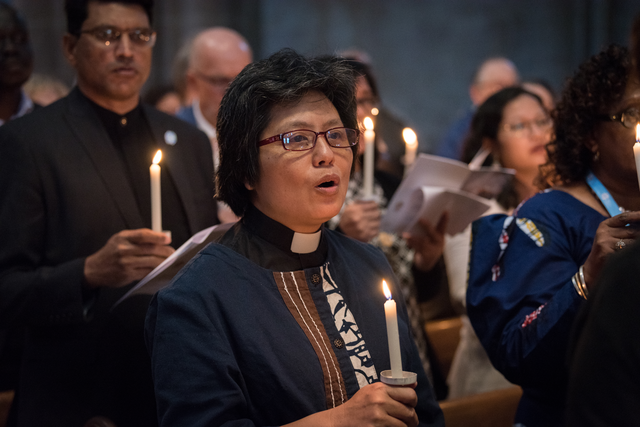 Worship service to mark the 20th anniversary of the Joint Declaration on the Doctrine of Justification, at Geneva cathedral, in June 2019. The liturgy from that service will be used in Reformation Day services world wide today. Photo: LWF/ A. Hillert

(LWI) - On 31 October, Reformation Day, churches around the world gather to celebrate their Lutheran heritage, many of them including ecumenical friends to mark this year’s 20th anniversary of the landmark Joint Declaration on the Doctrine of Justification (JDDJ).

That agreement, signed by leaders of the Lutheran World Federation (LWF) and the Roman Catholic Church in Augsburg on 31 October 1999, overcame divisions on the key theological question of justification or salvation by God’s grace alone, which had been at the heart of conflicts over previous centuries.

Over the past two decades, Methodists, Anglicans and Reformed Churches have also adhered to or affirmed the JDDJ, opening what LWF General Secretary Rev. Dr Martin Junge has called “a shared theological space” for Christians to stand together. In June, leaders of those five Global Christian Communions came together in Geneva’s St Pierre Cathedral to celebrate and to recommit themselves to the search for full, visible unity in sacrament and ministry.

In the lead up to Reformation Day 2019, churches around the world have been working with ecumenical partners to prepare their own celebration of this 20th anniversary, using a shared liturgy developed for the Geneva worship service.

In a joint letter, sent to Catholic bishops’ conferences and LWF member churches, General Secretary Junge and the President of the Pontifical Council for Promoting Christian Unity, Kurt Cardinal Koch, described the JDDJ as a “theological cornerstone” and invited Christians to use the liturgy locally.

In Hanover, the leading bishop of the United Evangelical Lutheran Church of Germany (VELKD), Bishop Ralf Meister said the JDDJ is “a lesson in how past conflicts can be re-evaluated in dialogue.” He added: “The fact that Reformation Day is now a holiday in many German states shows that the discoveries of the Reformers […] can unite people across borders of confessions in remembrance of their roots.”

In several churches across Latin America and the Caribbean, pastors and presidents said they would be using the JDDJ resources for ecumenical celebrations. The Evangelical Lutheran Church of Colombia (IELCO) held a service on 19 October during a visit by LWF vice-president Archbishop Antje Jackelén of the Church of Sweden, attended by representatives of the Catholic, Anglican, Methodist, Presbyterian, Orthodox and Mennonite Churches.

In Canada, the executive director of Canadian Lutheran World Relief, Rev. Dr Karin Achtelstetter and Catholic Cardinal Thomas Collins will speak at a service of thanksgiving on 8 November in Toronto’s First Lutheran Church. Dominican Father Prakash Anthony Lohale of Toronto’s Catholic Archdiocesan Office for Ecumenical and Interfaith Affairs said the JDDJ reminds us that “the past cannot be changed but the future can be transformed.” Rev. Tuula Van Gaasbeek of the Evangelical Lutheran Church in Canada’s Eastern Synod added: “In a city like Toronto that’s so diverse, we’ve already been doing what the JDDJ intends, and this event celebrates that”.

A milestone in Catholic-Lutheran dialogue

The JDDJ marked the culmination of 30 years of Catholic-Lutheran dialogue and declared that the mutual condemnations of the Reformation period were no longer valid, opening the way for closer cooperation, common worship and a new growing together in faith.

While a few critics questioned its method of differentiated consensus, most church leaders welcomed the declaration as “a significant milestone in the reconciliation of our two church traditions.” Many already saw it as the start of a new era in the warming of ecumenical relations across the wider Christian world.