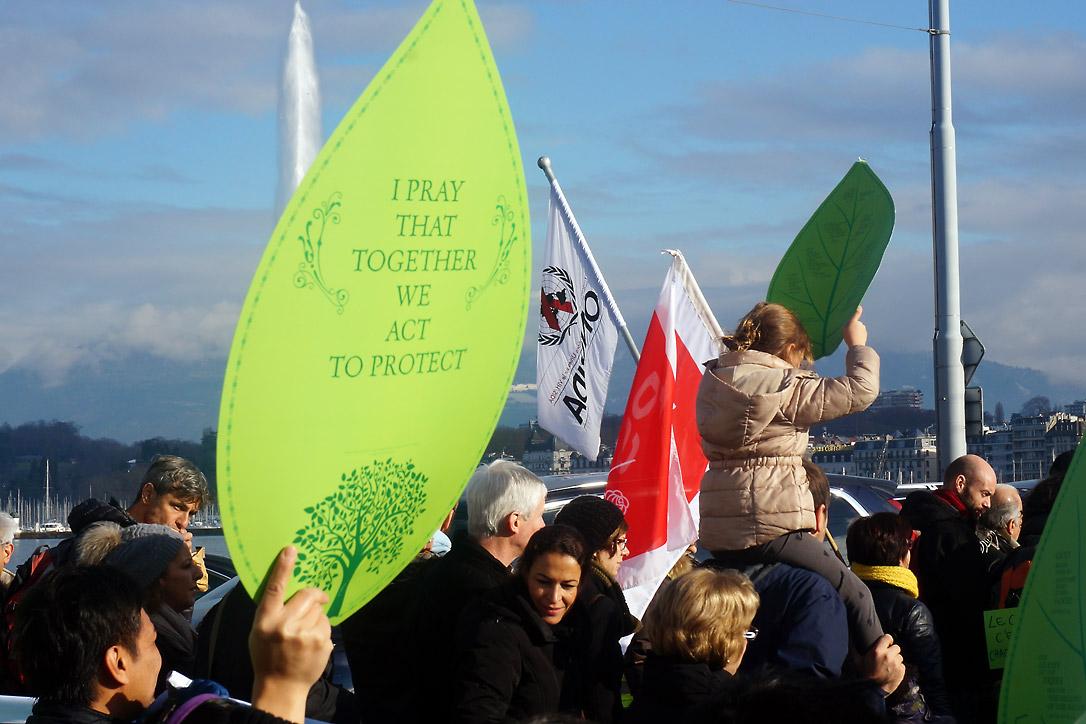 LWF takes to the streets to push for a UN climate change deal, November 2015. The LWF Council says churches should join in networks that build solidarity. Photo: LWF/P.Mumia

(LWI) –The Lutheran World Federation (LWF) Council has approved a study document articulating why and how Lutherans are present and active in the public space.

The Council received The Church in the Public Space, a statement prepared by a LWF working group and asked member churches to study and use it as a tool to deepen reflection and action at local church level. The governing body asked the Communion Office to keep working with churches to strengthen their public engagement, where possible, in cooperation with ecumenical and interfaith partners.

The communion-wide study group of seven theologians representing all LWF regions, developed the document at meetings that have been held since November 2014. The team reflected on experiences from their respective countries and regions and considered insights from previous LWF global study processes.

The LWF statement defines public engagement as the Lutheran “church’s ongoing response to the freedom that is ours in Christ to love and serve the neighbor.” It points out the 500th anniversary of the Reformation in 2017 as an opportunity to claim this engagement as a vital element of what it means to be Lutheran.

Lutherans are committed to five key activities in the public space, the LWF document states. These include assessing public issues in participatory ways, building relationships of trust, challenging injustice, discovering signs of hope, and empowering people in need.

The statement underlines LWF’s commitment to see its churches becoming parts of networks that build solidarity. It notes that Lutheran emphasis on the distinction between the worldly and spiritual realms calls on churches to proclaim God’s mercy “as an essential mark of our church and one of the contributions to the public space.”

Lutheran churches were reminded of their responsibility to advocate against politicization of religion and instrumentalization of politics by religious actors. The task of the church, the statement adds, “is not to dominate the public space but rather to warn against any world view or religion, Christian or other, becoming an ideology that would dominate the public space. Lutherans underline the importance of freedom of religion or belief as a means to protect the spiritual realm in people’s lives from undue interference.” This includes condemnation of all forms of violence, domestic or public, and any hate speech perpetrated in the name of religion.

The LWF statement asks churches to be committed to strengthening public space “as a just place” where all people have equal access to common goods and political decision-making processes. Such a place should ensure safety, especially for the vulnerable, and ensure meaningful participation among all groups of society.

public statement: The Church in the Public Space