Solidarity with peace building and encouragement of efforts to foster democracy 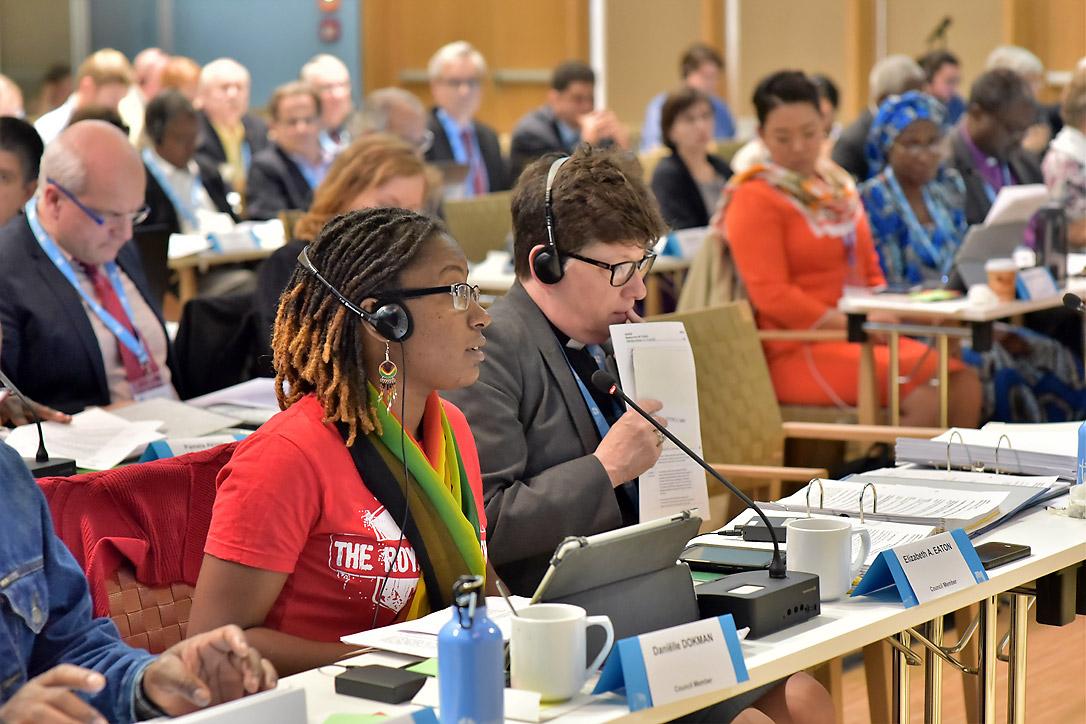 The LWF Council received  recommendations from its Committee for Advocacy and Public Voice, which are in addition to a series of public statements issued at the 15-21 June meeting in Wittenberg, Germany. .

The Council endorsed the new LWF study document on Lutheran hermeneutics "In the Beginning was the Word: The Bible in the Life of the Lutheran Communion".  It asked member churches to study the report, “Bearing Fruit: Implications of the 2010 Reconciliation between Lutherans and Mennonites/Anabaptists” and affirmed the need of the Lutheran communion to engage in deeper conversations about self-understanding and resource allocation for its ministries.

To have life and have it abundantly

A Council resolution on the United Nations Sustainable Development Goals (SDGs) stated the 17 goals adopted in September 2015 are universal, can be applied to all UN member states and that the LWF brings added value to the objective to “have life and have it abundantly.”

The LWF governing body encouraged member churches to lobby stakeholders, such as governments and private partners, “to mobilize resources toward full funding of the SDGs,” which will be implemented until 2030. Churches themselves should be involved in implementing strategies and processes to eradicate poverty and hunger, ensure quality education, decent work and economic growth, and promote gender equality, among other targets.

The Council urged LWF member churches to support the Christian presence in the Middle East, where the Evangelical Lutheran Church in Jordan and the Holy Land witnesses in “very difficult” circumstances. The governing body called on the world’s nations and states “to guarantee equal citizenship—with equal rights and responsibilities—grounded in law that respects all ethnicities and religions and embraces diversity.”

Churches were asked to encourage their governments to commend the recent French government initiative for an international conference to discuss a plan, based on UN Security Council resolutions and the Arab Peace Initiative, to accept normalized diplomatic relations with the State of Israel if it allows for a Palestinian state along the 1967 borders.

Open letter to churches in Latin America and the Caribbean

In an open letter to LWF member churches and partners in Latin America and the Caribbean, the Council expressed its deep concern over the threat to democracy in countries in the region, especially Brazil, which is facing political instability, and Venezuela, which is dealing with the impact of internal and external economic measures. It offered its prayers and urged churches “to renew their engagement with love, justice and peace, reconciliation and the vision of building a better world; and promote fundamental respect for human rights.”

The LWF governing body issued a pastoral statement on the recent killing of 49 people and injuries to several others at a nightclub in Orlando, Florida, United States. It expressed sadness about the tragedy of many issues—hate crime, gun violence, and marginalization of people because of sexual orientation or religious identification—in one horrific incident. “We continue to pray for the families of the slain and of the shooter, for the wounded, for the LGBT [lesbian, gay, bisexual and transgender] community, and for the Muslim community that faces the threat of retaliation. And we pray that the Prince of Peace will bring us all to the day when we stop the bloodshed.”

Receiving the report of the Committee for Theology and Ecumenical Relations, the Council endorsed the LWF study document on Lutheran hermeneutics, "In the Beginning was the Word: The Bible in the Life of the Lutheran Communion.” It affirmed recommendations from the group of theologians who led the five-year process of developing the document, and commended it to the member churches for study and action. The study document reiterates that the heart of the Bible is its salvific message, calls for mutual learning about biblical interpretation in diverse contexts, and urges support to theological education that prepares pastors, teachers and leaders to interpret Scripture effectively, among other emphases.

The Council received with appreciation the report, “Bearing Fruit: Implications of the 2010 Reconciliation between Lutherans and Mennonites/Anabaptists,” and asked member churches to study it as part of the follow-up  to action taken at the Eleventh Assembly in Stuttgart, Germany. It expressed appreciation to the Lutheran Foundation for Interconfessional Research in Strasbourg, France, and its continued support and contributions to LWF’s bilateral dialogues.

The LWF governing body affirmed the Lutheran communion’s need to engage in deeper conversations about self-understanding and resource allocation for its ministries. It endorsed the Committee for Mission and Development  report, encouraging plans to explore new work opportunities. These include addressing the causes and effects of migration, religion and development discourse, enhancing communion-building, sustainable development and new models of funding. It urged member churches to show support in developing LWF’s finances, and greater collaboration at Communion Office level with the Department for World Service and Office for Communication Services.