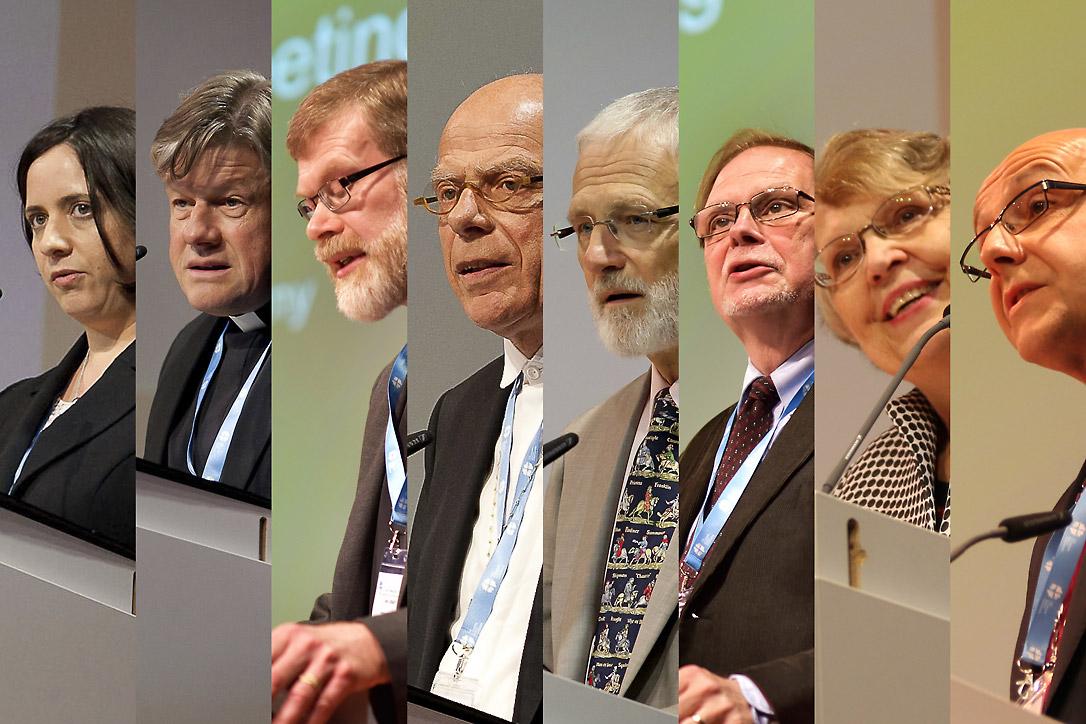 Representatives of the major partners of the LWF, with which it has dialgoue, greeted the Council on behalf of their organizations. Photos: LWF/Marko Schoeneberg, M. Renaux and F. HÃ¼bner

In greetings to the LWF Council, which met in the city of Reformation 15-21 June, LWF’s dialogue partner representatives said they look forward to continuing their strong engagement especially in commemorations of the 500th anniversary of the Reformation in 2017 and other related events.

Monsignor Dr Matthias Türk, representing the Pontifical Council for Promoting Christian Unity (PCPCU) emphasized that next year also marks 50 years of ecumenical dialogue between the LWF and the Catholic Church. The LWF and PCPCU have repeatedly affirmed that “we should not let go of the hands that we stretched out to each other,” he said. At the same time, “it has been repeatedly pointed out that there is more that connects Christians than… separates them.”

Referring to the October 2016 Joint Ecumenical Commemoration by the LWF and Catholic Church in Lund and Malmö, Sweden, Türk said the message from Lutherans and Catholics for the Reformation “is to leave conflict behind and write the next chapter of a deeper communion.” The commemoration would be “a new bold, prophetic step of abandoning conflict so that our hands, minds and hearts can be open to receive our common community as a gift from God.”

He underlined Catholics’ shared conviction with Lutherans that Reformation had become global and ecumenical, adding that was why the LWF and Catholic Church have invited other ecumenical partners to join in this year’s events in Sweden.

Türk said the wider ecclesiological consequences of the 1999 Joint Declaration on the Doctrine of Justification (JDDJ) by the LWF and Catholic Church were becoming more apparent. He referred to the JDDJ’s endorsement by the Methodists in 2006 and preparations by the World Communion of Reformed Churches (WCRC) as signs of the rich common future shared “by a growing church community of previously separate ecumenical partners.”

WCRC General Secretary Rev. Chris Ferguson thanked the LWF for the powerful opportunities that the 2016 Joint Ecumenical Commemoration and the 2017 events provide to strengthen bilateral relationships and the goal towards church unity. He said vigorous work has begun on the Reformed communion’s association with the JDDJ, which would include special emphasis on the inseparability of justification and justice.

Reflections on LWF’s theme for the Reformation anniversary, Liberated by God’s Grace, and sub-themes stating that salvation, creation and human beings were not for sale “have stimulated us to clearly move our theological reflection about the Reformation into the present tense,” Ferguson added.

Roots in the Reformation

In greetings from the Mennonite World Conference, Rev. Rainer Burkart said the relationship between Mennonites and Lutherans has continued to grow since the moving reconciliation action at the 2010 LWF Eleventh Assembly in Stuttgart, Germany. He said the MWC looks forward to the preliminary results of the trilateral dialogue with the LWF and PCPCU on baptism next year, and at the same time continues to introduce the dialogue to its congregations and theological institutions worldwide.

Burkart thanked LWF General Secretary Rev. Dr Martin Junge for offering an excellent experience in ecumenical learning during his address on “Catholicity and Diversity” to last July’s MWC general assembly in Pennsylvania, United States. He added that Mennonites too “see our roots in the Reformation” and will inaugurate a decade of worldwide events to commemorate this history in February.

Canon John Gibaut offered the Anglican Communion’s prayers as the LWF begins the Reformation anniversary commemorations. He highlighted the Anglican Consultative Council recent affirmation of the JDDJ and forthcoming publication by Anglicans and Lutherans on the theme, Liberated by God’s Grace.

Anglicans look forward “in hope to a renewal of the unity and mission of the Church through common reflection on our reformation and catholic heritage,” he said.

Bishop Gerhard Ulrich, Chairperson of the LWF German National Committee, which hosted this year’s Council meeting, described coming together in Wittenberg as a family meeting, especially in preparations towards the reformation anniversary. “As a family with this worldwide context it is helpful to come back again and again to the starting point of our pilgrimage through world and time.”

Gratitude for extending ‘the right hand of fellowship’

Pentecostal churches are grateful for LWF’s commitment to extending the “right hand of fellowship” to other churches and even to those that cannot profess to a Christian identity, Jean Daniel Plüss, Swiss Pentecostal Mission, told the LWF Council.

He said the international dialogue between the LWF and classical Pentecostals that will begin this September provides an opportunity to offer mutual experiences and insights. “We do not live in two different worlds; a Lutheran and a Pentecostal as it were. […] In Christ we are following the same Gospel-calling,” he stressed.

International Lutheran Council (ILC) Chairman Bishop Hans-Jörg Voigt noted that the annual meetings with the LWF identify theological questions for discussion, such as the understanding of Holy Scriptures. He expressed ILC’s “gratitude and thankfulness” for the publication From Conflict to Communion, and welcomed LWF’s offer to consider making an agreement with the LWF and PCPCU, similar to the Methodists’ process of joining the JDDJ.

Greeting the Council on behalf of the World Council of Churches (WCC), Natasha Klukach, program executive for Church and Ecumenical Relations, commended the LWF for its commitment “to defend the integrity of creation, humanity and the message of salvation at the core of the gospels.”

She said there were many opportunities for synergy between both organizations. She underlined the contribution of LWF’s expertise to WCC international affairs work especially on the refugee crisis, which had “positively impacted the effectiveness of ecumenical cooperation with UN organizations.”

Klukach emphasized the “inherently ecumenical” character of the LWF, and offered WCC’s prayers and thanksgiving as the LWF and Catholic Church prepare to jointly commemorate the Reformation at the event in Lund, Sweden this October.

Greeting the Council on behalf of the Global Christian Forum, Prof. Kathryn Johnson, a member of the Evangelical Lutheran Church in America, gave thanks for the LWF and its work, especially towards the 500th Reformation anniversary. She affirmed the strong Lutheran support to the forum, which brings on board many churches that are not involved in the official ecumenical dialogues—one-quarter of the world’s Christians—to promote Christian unity.