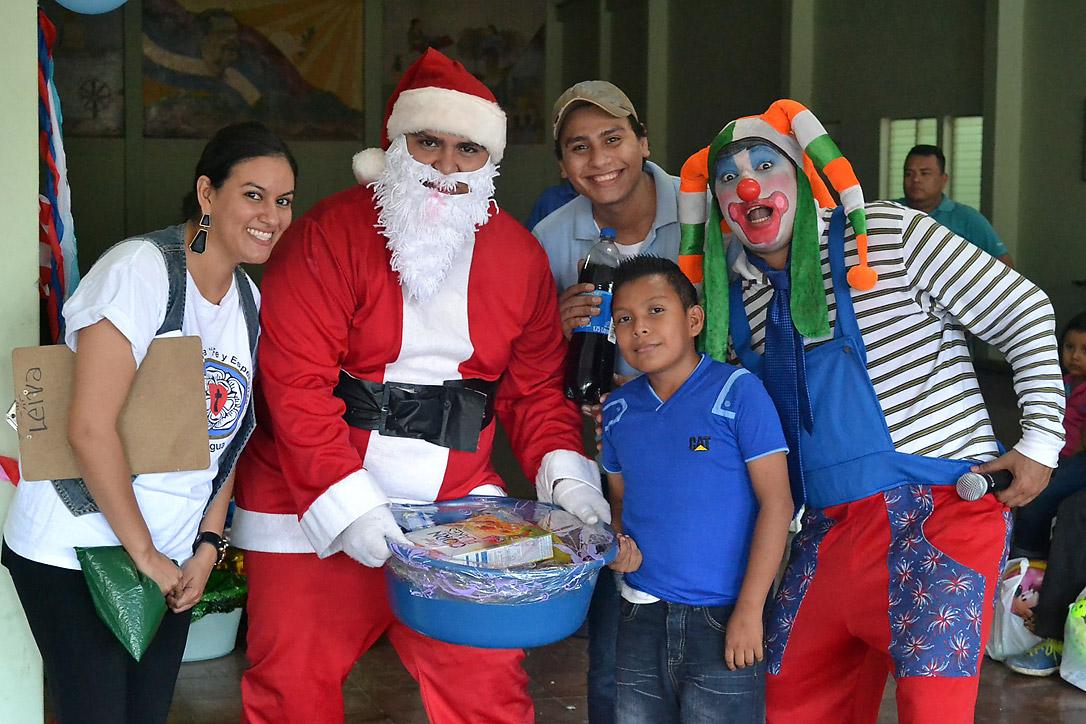 AIDS work in the Nicaraguan Lutheran Church of Faith and Hope prioritizes children. Rev. Soliette LÃ³pez, left, Alexander GarcÃ­a, Kevin Mena and Sergio Rios take part in a children's Christmas party for children often left out because of discrimination, in the western city of Masaya, near the capital Managua. Photo: Daniela Cruz

“Access equity rights now” is the theme of the 18-22 July conference, during which AIDS advocates will seek to repeal laws that infringe people’s human rights and deny people - especially those living with HIV -  the ability to participate in the world as equals.

López talked to Lutheran World Information about the AIDS ministry of the Nicaraguan Lutheran Church of Faith and Hope.

“I have worked with young people in the area of HIV and AIDS prevention since I was 13,” says the 26-year-old pastor.

A teenage López and two other youth presented the argument that the church needed to show compassion for people excluded by society to Bishop Dr Victoria Cortez Rodríguez in 2003, when they asked the church to be involved in HIV prevention.

After ordination in 2011, López was sent to a community of people living with HIV in Masaya city. During the first three years her team dealt “only with the issue of prevention by giving lectures and training in our communities of faith, schools, universities and churches of other denominations.”

Their approach changed after they met a self-help group of people living with HIV, and started providing them with spiritual support.

“Being closer to them, we began to see their needs holistically. Besides being people with HIV, they are people of low socioeconomic status, who have little or no education, with different sexual preferences and with little or no faith. All this added to the HIV status makes them a vulnerable population to society, so we decided to take action to influence and make a difference in their lives,” recalls the young pastor.

It breaks my heart to hear stories about children who have never been invited to a birthday party because the neighbors know their HIV status or because they know that they are related to someone with HIV.

At the time, Nicaragua had around 6,400 people living with HIV, according to the United Nations AIDS organization, UNAIDS. Today, the country still has a relatively low HIV prevalence of around 7000 people. However access to treatment is limited, as many public hospitals and medical centers have poor health services. The church’s diaconal work includes hospital visits to AIDS patients, to whom volunteers bring food and toiletries.

Working with children is another priority for the church. “It breaks my heart to hear stories about children who have never been invited to a birthday party because the neighbors know their HIV status or because they know that they are related to someone with HIV,” López says. .

Eight years ago, the church launched an annual party for children affected by HIV, usually held in December. “In this party, children who are positive, orphans or from families living with HIV can have fun and eat together. Members of the youth ministry disguise themselves as Santa Claus, clowns or characters that children like. Funds collected by friends of the youth ministry buy toys and the food, and especially bring much love and joy,” she adds.

The annual party is also a platform for advocacy about treatment, and the stigma and discrimination experienced by people affected by AIDS. “We raffle basic food baskets, which are given to children who are HIV positive. We ensure that these baskets have the basic nutrition requirements for a patient who is taking antiretroviral treatment. Last year we had 62 children in our party, including 27 who are HIV positive.”

In the community, the church team also gives training to start small income-generating activities, such as arts and crafts to improve people’s living standards. “Jewelry processing, production of piñatas (traditional clay pots) and hammocks, gives them things they can sell to survive,” she adds.

Nicaragua has slightly more than 3,400 people receiving free antiretroviral treatment, out of the estimated 7,000 people living with HIV. “But there are still many more who for various factors are not receiving antiretroviral treatment. That is why our church will continue to be in alliance with NGOs and other organizations raising advocacy about this issue,” López emphasizes.

In Durban, she hopes to learn from faith groups and other actors, and share about the work of LWF member, the Nicaraguan Lutheran Church of Faith and Hope.

“As Christians we firmly believe that we are sent to fight as Jesus did against injustice. Our work always takes the approach to defend the human rights of people with HIV regardless of gender, race, sexual preferences or their political position,” she concludes.

The dangerous task of defending human rights in Colombia
news