The dangerous task of defending human rights in Colombia 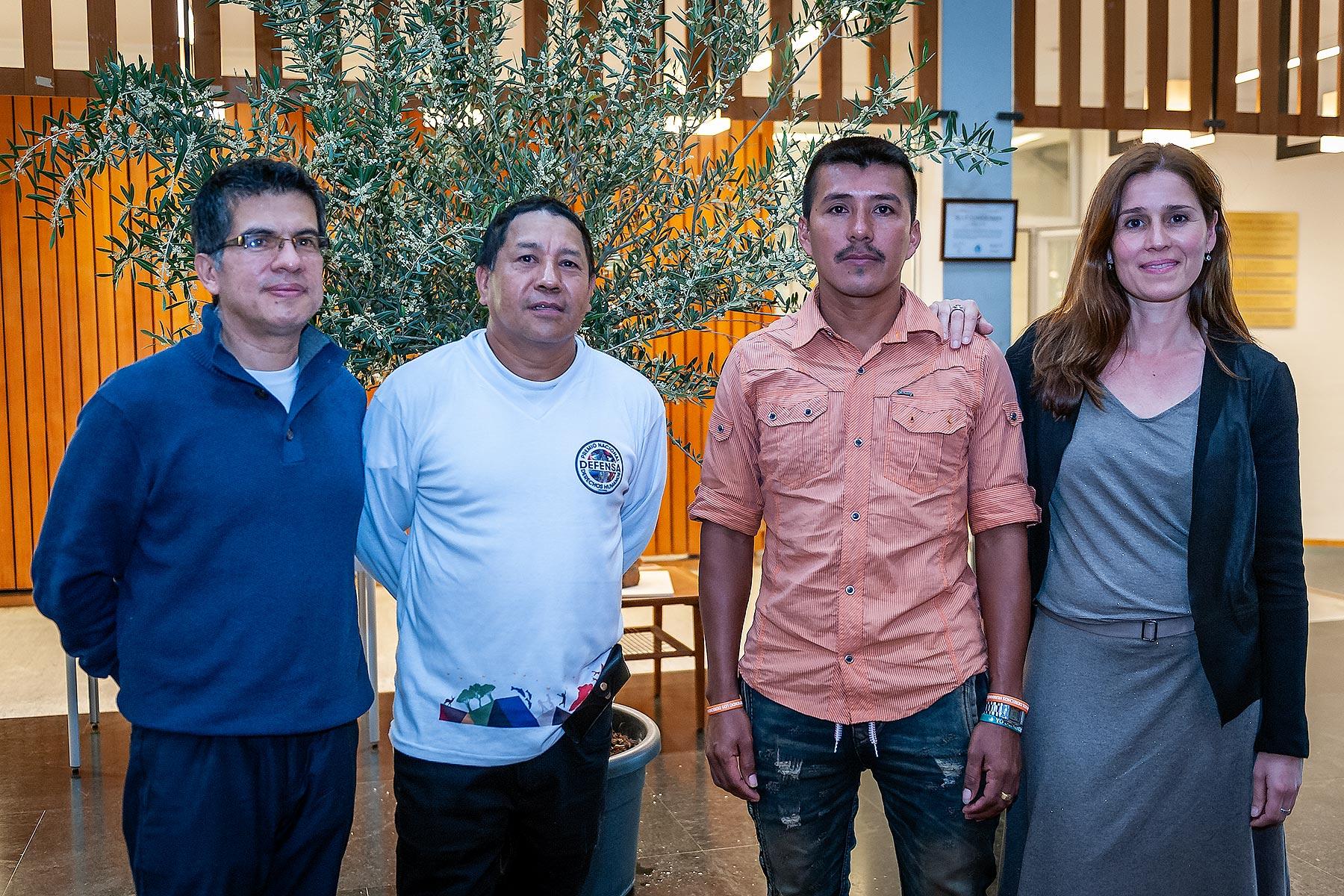 The LWF welcomes recipients of an award for human rights defenders

(LWI) - Three award-winning Colombian human rights defenders visited the Lutheran World Federation on 27-28 May as part of a European tour to raise awareness of the dangers and difficulties faced by so many people working for justice and peace in the country today. According to the Somos Defensores [We Are Advocates] network which monitors attacks against human rights defenders, 2018 was one of the worst years ever for these activists and social leaders in Colombia, with over 800 attacks and 155 murders reported.

The three are recipients of the 2018 National Human Rights Defenders award, presented by the Church of Sweden and the Swedish faith-based organization Diakonia, with the support of the Swedish government. Its goal is to draw international attention to struggles of those working for human rights, especially those located in isolated, grassroots communities that are often targeted by illegal armed groups, as well as by state security forces, according to the latest report on Colombia drawn up by the UN High Commissioner for Human Rights

Germán Graciano Posso, legal representative of the San José de Apartadó Peace Community in the northwest of Colombia, shared stories of over 300 members and supporters of his community who have been murdered in the past two decades. The small farming community of some 600 people was founded in 1997 at the height of the conflict between the government and members of the two main guerrilla groups, the Revolutionary Armed Forces of Colombia (FARC) and the National Liberation Army (ELN).

In an area torn apart by violence for decades, the community was the first of its kind to declare itself a neutral space and reject the presence of all armed groups on its land. But many of its members have paid with their lives for refusing to support any of the groups involved in the armed conflict. In 2005, seven community members, including three children, were murdered in an attempt to terrorize other families and force them to abandon their land. Colombia’s supreme court recently convicted six members of the military who received 34-year jail sentences for their part in the massacre.

Germán said he and the community “had high hopes with the country’s peace process that everything would change for the better” but that has not happened. The paramilitary presence has been growing in the past months, he said, and young people continue to be recruited into their ranks, an issue that has been acknowledged by the Ombudsman office.

Dolis Estela Valencia is a leading member of the Black and Afro-Descendant Community Council of Alto Mira y Fronteras in Tumaco, on the Pacific coast close to the border with Ecuador. The Council represents 42 local communities, working to support the Afro-Colombian people whose collective land rights were recognized by the government in 1993.

Despite that legal recognition, Dolis shared her experience of death threats, forced displacements and assassinations of those struggling to defend their land and livelihoods Farmers in this community are trying to grow cocoa beans, bananas and other traditional crops instead of the coca leaves that drive Colombia’s lucrative drug trafficking industry. Her community is included in the government program for the substitution of illegal crops as part of the peace accords.

As a consequence of the U.S.-backed Plan Colombia, designed to combat the drug cartels, farmers from other parts of the country moved to the fertile region of Alto Mira y Fronteras causing tensions with the local communities. Dolis said “the government has always been absent from the area, with no roads and very poor housing, health and education.”

Plans are now underway for the construction of a major road but this has also brought problems for the local communities who are increasingly being threatened or bought out by big businesses eager to control access to this strategic area connecting Colombia to neighbouring Ecuador. Despite the October 2017 massacre of seven local farmers, and one of the community leaders, Dolis said “the fight for our territory and way of life will continue.”

Genaro de Jesús Graciano is legal representative of a socio-environmental organization, Movimiento Ríos Vivos en Antioquia which includes 15 grassroots communities affected by the giant Ituango hydroelectric dam project. Plans for the 220-meter high dam across the Cauca river were completed a decade ago and construction began in 2011, but Genaro said the project –one of the largest of its kind in Latin America – has been flawed from the start.

A series of landslides and blocked water diversion tunnels, caused by faulty planning and mistakes in construction, he said, have turned the structure into an impending disaster zone. Communities live in uncertainty about the unknown technical, environmental and economic viability of the project, while families living upstream have already suffered from the loss of livelihoods as fish have died. Mass graves containing victims of Colombia’s civil war have been flooded by the diverted river, causing a crucial loss of evidence for the country’s Truth Commission which is part of the transitional justice and peace process.

Genaro and his organization have filed official complaints and requests for compensation from the construction company and shareholders, the Empresas Públicas de Medellin and the regional Government of Antioquia. Besides, the national environment authority (ANLA) has issued official warnings about the dangers of this project which have been disregarded. In the meantime, 5 environmental leaders have been killed, while many others have been the targets of death threats, discrimination and exclusion from public debates about the future of the dam.

As well as sharing stories during an encounter at LWF headquarters and meeting UN special rapporteurs in Geneva, Germán, Dolis and Genaro were also visiting Berlin, Stockholm and Uppsala as part of the 16 to 29 May European tour. A fourth prize winner, 78-year-old community leader Maria Ligia Chaverra, was unable to take part in the tour because of health reasons. All of them underline the importance of the Human Rights Defenders prize in shining a much-needed spotlight on their stories and bringing international attention to the plight of their communities.