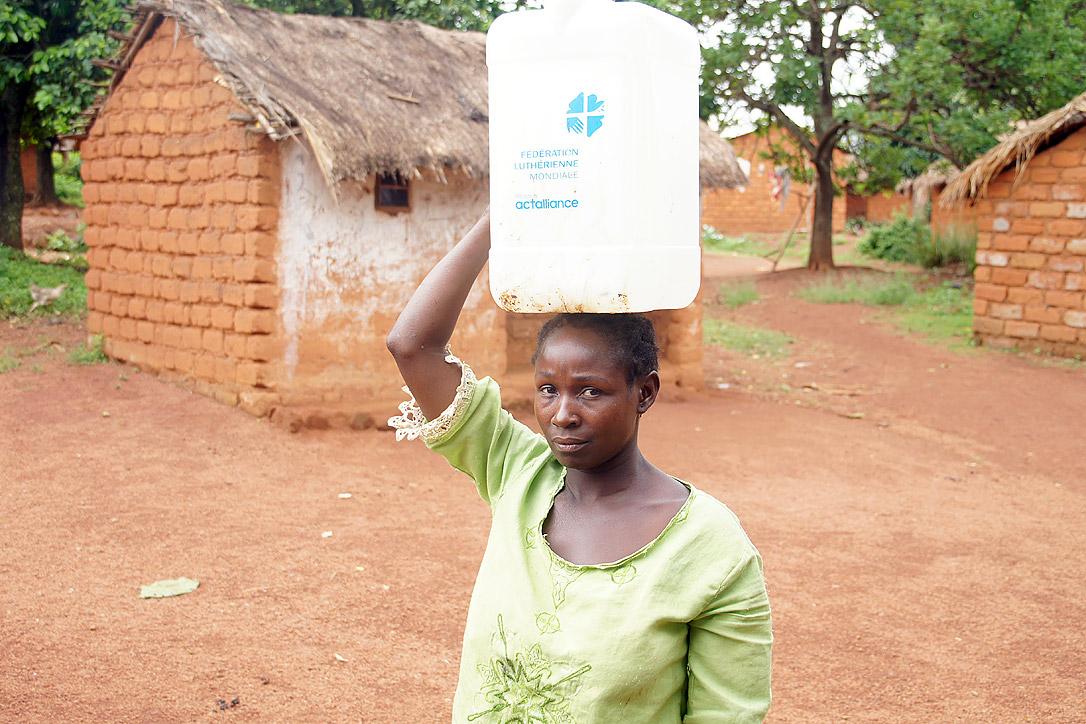 Rebecca Abbo returned to her damaged and empty house in Yongoro village, western CAR, in early May. With LWF's support, she can now access clean water. Photo: LWF/P. Mumia

(LWI) – The Lutheran World Federation (LWF) is among 26 international non-governmental organizations in the Central African Republic (CAR) that are calling on all armed actors in the country’s conflict to respect humanitarian access to all communities in need.

In a joint statement released on 19 May the organizations condemned recent attacks against aid workers, saying that the increasing violence, threats and killings only “jeopardize assistance and risk reducing access to vulnerable populations depending on NGOs for their basic needs.”

The political impasse in CAR since December 2012 and subsequent conflict between armed militia groups has resulted in hundreds of civilian deaths during attacks on urban and rural communities. Tens of thousands of homes and businesses have been looted, destroyed or burned down, sparking massive population displacements.

With support from partners in the ACT Alliance network, the LWF emergency program in CAR and the member church Evangelical Lutheran Church of the Central African Republic, have been providing food and non-food items (NFIs) to thousands of internally displaced persons (IDPs) in Ouham Péndé and Nana Mambéré regions in the northwest, and in the capital Bangui. Reconstruction of shelters and restoration of water sources in several villages, which had been delayed because of insecurity, has now started.

LWF assistance in CAR’s northwestern axis targets populations that repeatedly flee to the forests because of recurring attacks, and cautiously return home to assess their safety and assistance from the outside. Working with community outreach officers, LWF uses local centers such as schools and churches to distribute much-needed water, sanitation and hygiene kits, and farming tools as the IDPs have lost nearly everything.

LWF’s earlier intervention in the northeast was suspended in December 2013 due to the deteriorating security and safety.

Reiterating the recent joint statement by the international NGOs, the LWF CAR team leader Ms Serena Badenhorst underlined the difficulty in accessing vulnerable populations, but stressed the urgency to meet the enormous needs.

“More resources and support are needed to support civilians caught in the crisis,” Badenhorst emphasized. "But there is an urgency to meet these needs today, not only to save thousands of lives now, but to also save and improve hundreds of thousands of lives in the coming decades. The longer today's needs are left unmet, the longer CAR will struggle to recover from this crisis and the longer Central Africans will struggle with chronic poverty," she added.

Over 2.5 million people in CAR—more than 50 percent of the population—require urgent assistance. There are an estimated 560,000 IDPs throughout the country and another 350,000 are refugees in neighboring countries.