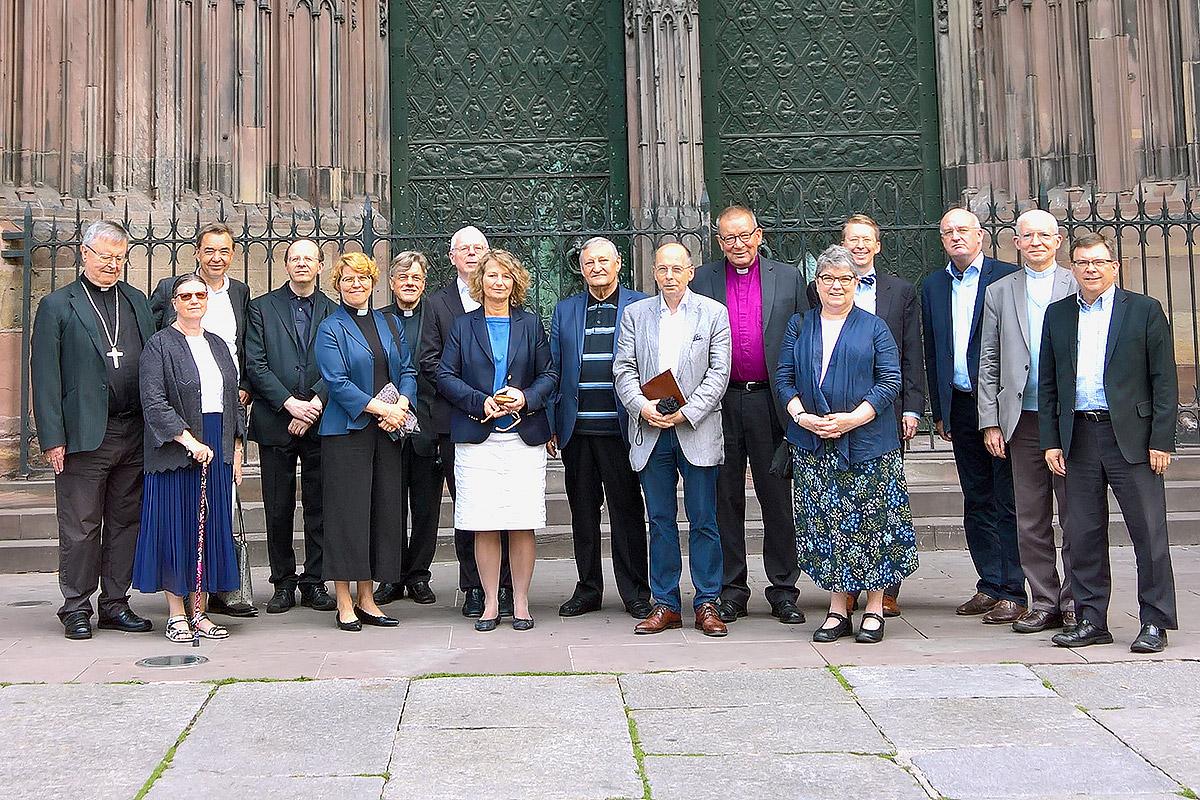 Members of the Lutheran-Roman Catholic Commission on Unity at the final meeting of their Fifth Phase in Strasbourg in 2018. Photo: IER Strasbourg

(LWI) - The Lutheran World Federation (LWF) and the Pontifical Council for Promoting Christian Unity (PCPCU) have issued a joint press release announcing the online publication of the report of the Fifth Phase of the Lutheran-Roman Catholic Commission on Unity. The report is entitled Baptism and Growth in Communion.

The new document, which has been in preparation for the past seven years, includes important impulses for ongoing theological and ecclesiological discussion and makes “a significant step in proposing a differentiating consensus on baptism.”

The report seeks to find a language for the ecclesial dimensions of growth in communion. It concludes with six commitments setting out a road map for the ongoing dialogue and for the growing cooperation at all levels between Lutherans and Catholics. It highlights particular events over recent years that have contributed to the journey ‘from conflict to communion’, notably the joint commemoration of the 500th anniversary of the Reformation in Lund, Sweden, the Declaration of Intent endorsing fuller collaboration between the LWF’s World Service arm and the Caritas Internationalis network, as well as local initiatives such as the visit of Pope Francis to the Lutheran parish in Rome in 2015.

Nevertheless, the press release notes there have been challenges in the reception of this report. LWF’s governing Council studied and received it in 2019, while the PCPCU and the Vatican’s Congregation for the Doctrine of the Faith have expressed concerns and described the report as “an open-ended study document not yet ready for reception.”

Prof. Dr Dirk Lange, LWF’s Assistant General Secretary for Ecumenical Relations, noted that the different views, far from being an obstacle, “lead us to questions at the heart of our Lutheran-Catholic dialogue, which we will be exploring together in the next phase of the Joint Commission’s work.” The new report, he says, “encourages us to move forward on this journey of joint exploration as we begin to prepare for the Sixth Phase of the dialogue.”

Different views lead us to questions at the heart of our Lutheran-Catholic dialogue, which we will be exploring together.

Lange recalled the gifts of a chalice and paten, crafted by members of the ecumenical Taizé community, that the LWF leadership gave to Pope Francis during a recent visit to the Vatican in June 2021. During that meeting, Lange said, “the pope encouraged us to continue with passion on our shared journey, noting that ecumenism is not an exercise of ecclesial diplomacy but a journey of grace [….] which purifies memories and hearts, overcomes attitudes of inflexibility and directs towards renewed communion. Not towards reductive agreements or forms of irenic syncretism, the pope added, but towards a reconciled unity amid differences.”

The report affirms the commitment of both sides to the next stage of the dialogue, saying: “With thankfulness, Lutherans and Catholics acknowledge a common faith concerning the salvific action of God in baptism. They wish to go further in their reflections on incorporation into the body of Christ and the ecclesial dimensions of growth in communion. (§2.5.2.)”

The report is available on the websites of both the LWF and the PCPC.

Report of the Lutheran-Roman Catholic Commission on Unity