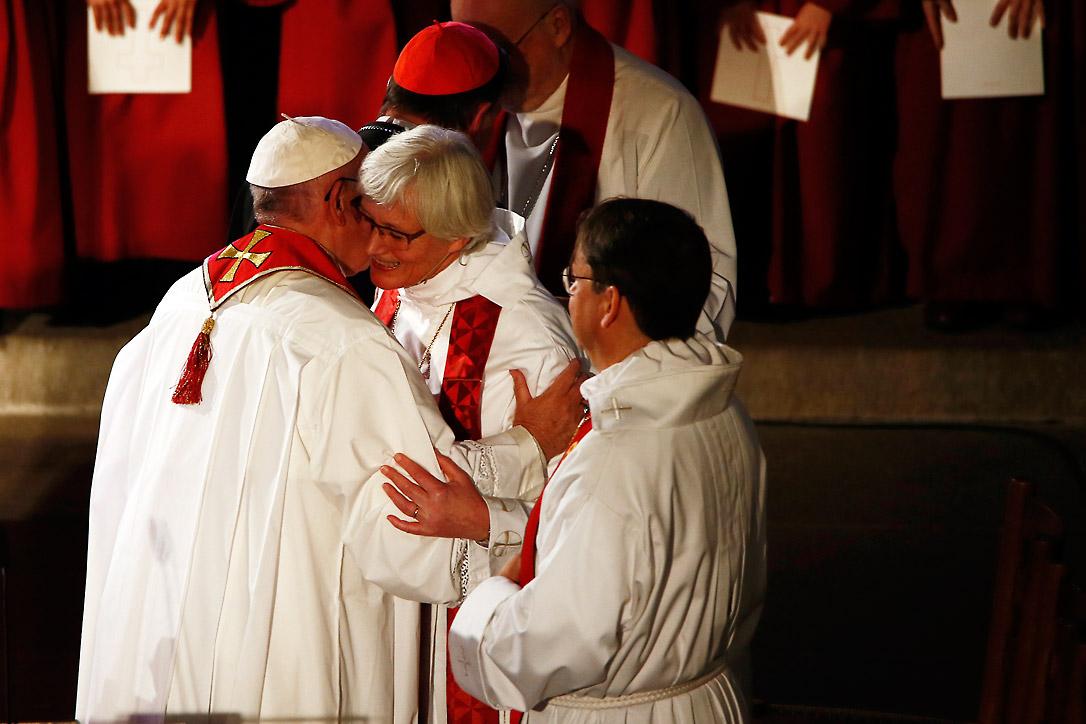 Pope Francis and Antje JackelÃ©n, Archbishop of Uppsala, offer each other the peace of Christ during the joint commemoration in Lund Cathedral. Photo: Church of Sweden/Mikael Ringlander

Pope Francis, LWF President Bishop Dr Munib A. Younan and LWF General Secretary Rev. Dr Martin Junge today led an event in which the Catholic Church and the Lutheran World Federation declared commitment to move away from conflict, journey towards communion and strengthen joint witness. The historic gathering in Sweden is the first ever Catholic-Lutheran joint commemoration of a Reformation anniversary at a global level.

The head of the worldwide Catholic Church and leaders of The Lutheran Word Federation (LWF) co-hosted the Joint Catholic-Lutheran Commemoration of the Reformation consisting of a Common Prayer in Lund Cathedral with the participation of 500 people and a public event attended by some 10,000 people in the nearby Malmö Arena, and followed by people all over the world in live broadcasts and live streams.

King Karl XVI Gustav of Sweden, Queen Silvia of Sweden and Sweden’s Prime Minister Stefan Löfven and other government officials joined leaders of Christian World Communions and church-related organizations from around the world at the liturgical service, where Pope Francis and General Secretary Junge delivered their sermons in Spanish.

Pope Francis told worshippers that “in the context of the commemoration of the Reformation of 1517, we have a new opportunity to accept a common path, one that has taken shape over the past fifty years in the ecumenical dialogue between The Lutheran World Federation and the Catholic Church.”

In his sermon, Junge emphasized that both Lutherans and Catholics have “much more that unites us than that which separates us. We are branches of the same vine. We are one in Baptism. This is why we are here at this joint commemoration: to rediscover who we are in Christ.”

A highlight of the service was the signing of a Joint Statement by Pope Francis and President Younan. The document expresses gratitude to God for the sustained and fruitful ecumenical dialogue between Catholics and Lutherans, in which mutual understanding and trust has deepened. It states both partners “are no longer strangers,” having grown closer through dialogue and shared witness.

In the joint statement, Catholics and Lutherans express gratitude for the “spiritual and theological gifts received through the Reformation.” They confess and lament that they have wounded the visible unity of the Church because of the prejudice and conflicts that accompanied their theological differences, and became instrumentalized for political ends.

The statement emphatically rejects “all hatred and violence, past and present, especially that expressed in the name of religion.”

Faith and baptism in Christ, they state, “demand of us a daily conversion, by which we cast off the historical disagreements and conflicts that impede the ministry of reconciliation.” They acknowledge that “while the past cannot be changed, what is remembered and how it is remembered can be transformed.”

The document states the prayer of Catholics and Lutherans for the healing of wounds and memories “that cloud our view of one another,” adding, “we recognize that we are freed by grace to move towards the communion to which God continually calls us.”

The statement highlights the joint responsibility towards people yearning for dignity, justice, peace and reconciliation and urges Catholics and Lutherans “to work together to welcome the stranger” and defend the rights of refugees and those seeking asylum.

The two communions express their joint responsibility towards God’s creation, “which suffers exploitation and the effects of insatiable greed.” They pray for a change of hearts and minds that would lead to “a loving and responsible way to care for creation” and safeguard the right of future generations to enjoy “all its potential and beauty.”

Responding to spiritual thirst and hunger

The statement acknowledges the joint pastoral responsibility of Catholics and Lutherans to “respond to the spiritual thirst and hunger” of many of their members “who yearn to receive the Eucharist at one table, as the concrete expression of full unity.” It expresses a longing “for this wound in the Body of Christ to be healed,” recalling that this is “the goal of our ecumenical endeavors.”

The joint statement concludes with an encouragement, calling upon all Lutheran and Catholic parishes and communities “to be bold and creative, joyful and hopeful in their commitment to continue the great journey ahead of us. … God’s gift of unity among us shall guide cooperation and deepen our solidarity.”

Towards increased cooperation in serving the needy