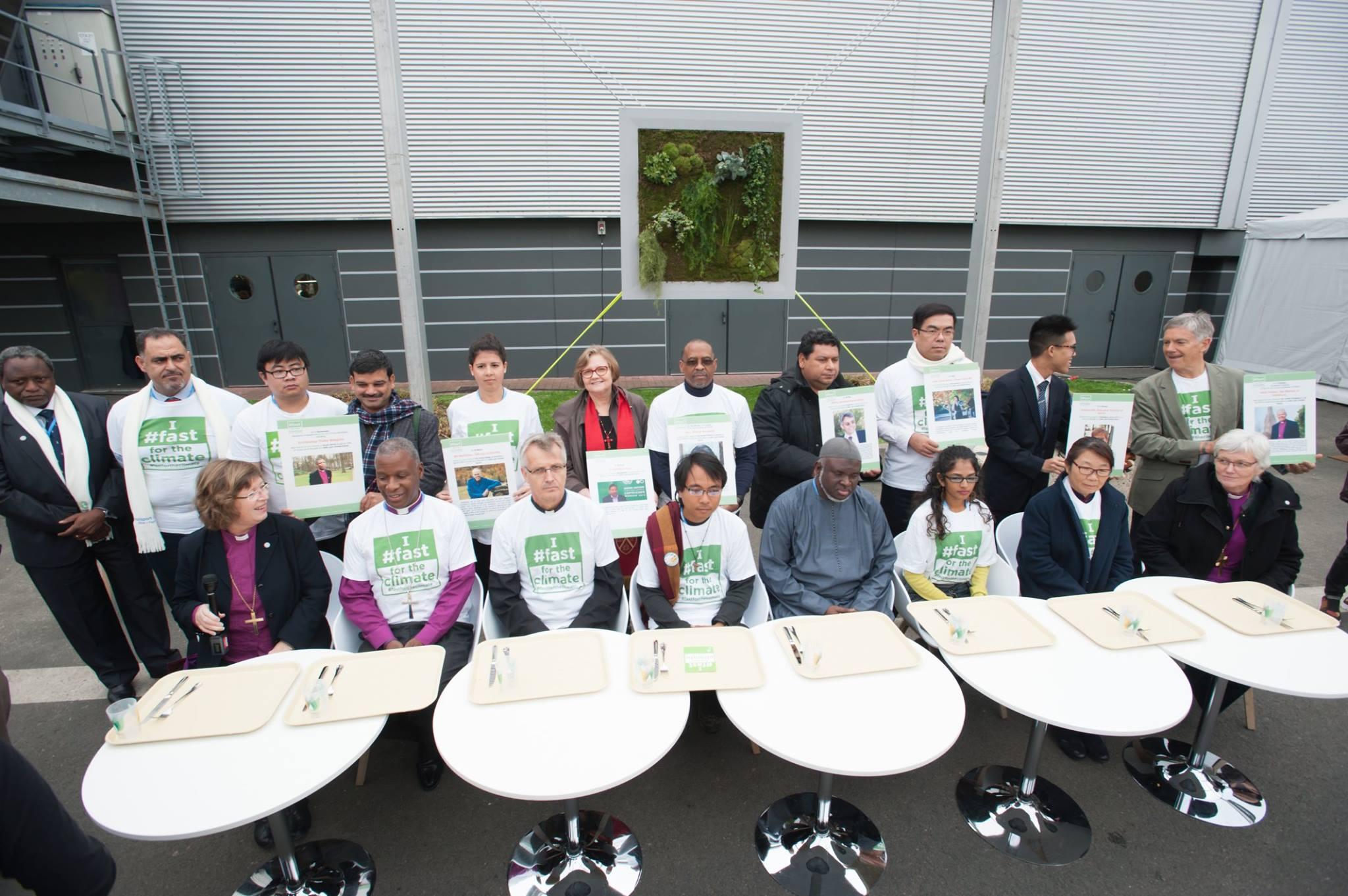 An interfaith group of religious leaders sits in front of empty trays during a public action promoting the Fast for the Climate campaign during the COP21 UN climate summit in Paris, France. Photo: LWF/R. Rodrick Beiler

PARIS, France, 2 December 2015 (LWI) - Over 20 faith leaders, with youth, political and civil society representatives sat down for a unique lunch at COP21 at a table with knives and forks but no food, in a public demonstration of their hunger for climate justice. The stunt was part of the Fast for the Climate initiatives on 1 December in Paris.

Yeb Saño, former Philippines’ chief climate negotiator, the Most Rev. Dr Thabo Makgoba, Archbishop of Cape Town, and Imam Ibrahim Saidy of Norway were among the 'diners' taking part in the Fast For The Climate at the UN climate summit in Paris.

The event was a chance for the campaigners to tell gathered journalists and COP delegates why they had chosen to abstain from food: to show solidarity with communities worst affected by global warming and make a compelling call for climate justice.

Other faith leaders at the empty lunch table included Archbishop Antje Jackelén of the Church of Sweden, a member church of both the World Council of Churches (WCC), and The Lutheran World Federation (LWF), Bishop of Salisbury the Rt. Rev Nick Holtam, and LWF General Secretary Rev. Dr Martin Junge.

Together with 10,000 people worldwide, they were part of the global initiative, which takes place on the first of every month. Besides the demonstration, the Fast for the Climate day at COP21 also included an official side event at the climate conference and the celebration of the breaking of the fasting.

Commenting on the interfaith initiative, Junge stressed the spiritual aspect of fasting. “Since time immemorial, we have fasted in order to get space in our minds and hearts for renewal. So when I fast for the climate, I’m fasting first to get that mental space, that very strong focus, on vulnerable people suffering the most from climate change,” he said.

“Climate change is an issue of inter-generational justice. That's why I am fasting for the climate with a particular focus on the youth, who are already taking—and will take—the brunt of what will happen if we remain inactive on this issue”, added Junge.

For Archbishop Jackelén fasting is always a powerful reminder of the interdependence among people and with the planet. “Fasting for the climate is an expression of the global commitment in the worldwide church,” she said. “For all of our churches involved in the initiative, this has to do with leadership, values, lifestyle and justice,” added the Swedish church leader.

ACT Alliance General Secretary Dr John Nduna fasted in solidarity with those who don't have food on the table due to climate change. “It's our responsibility, as an international community, to ensure that climate change is addressed and to reverse the problems that communities are facing, for the sake of those who have nothing to eat, whose children go to bed hungry," he said.

Later the same day, Fast for the Climate enthusiasts gathered in a small church downtown Paris for the breaking of a 24-hour fast and feast to celebrate unity and the solutions for a better future. Organizers estimate that about 10,000 people worldwide were fasting for climate action.

Addressing the participants of the celebration, Yeb Saño, who inspired the Fast for the Climate campaign, emphasized that the initiative is also a mechanism of pressure upon negotiators gathered at COP21. “We want to tell the world leaders here in Paris, that, please, don’t disappoint the world. The whole world is watching,” he said.

For more information on the LWF delegation attending the Paris negotiations, contact