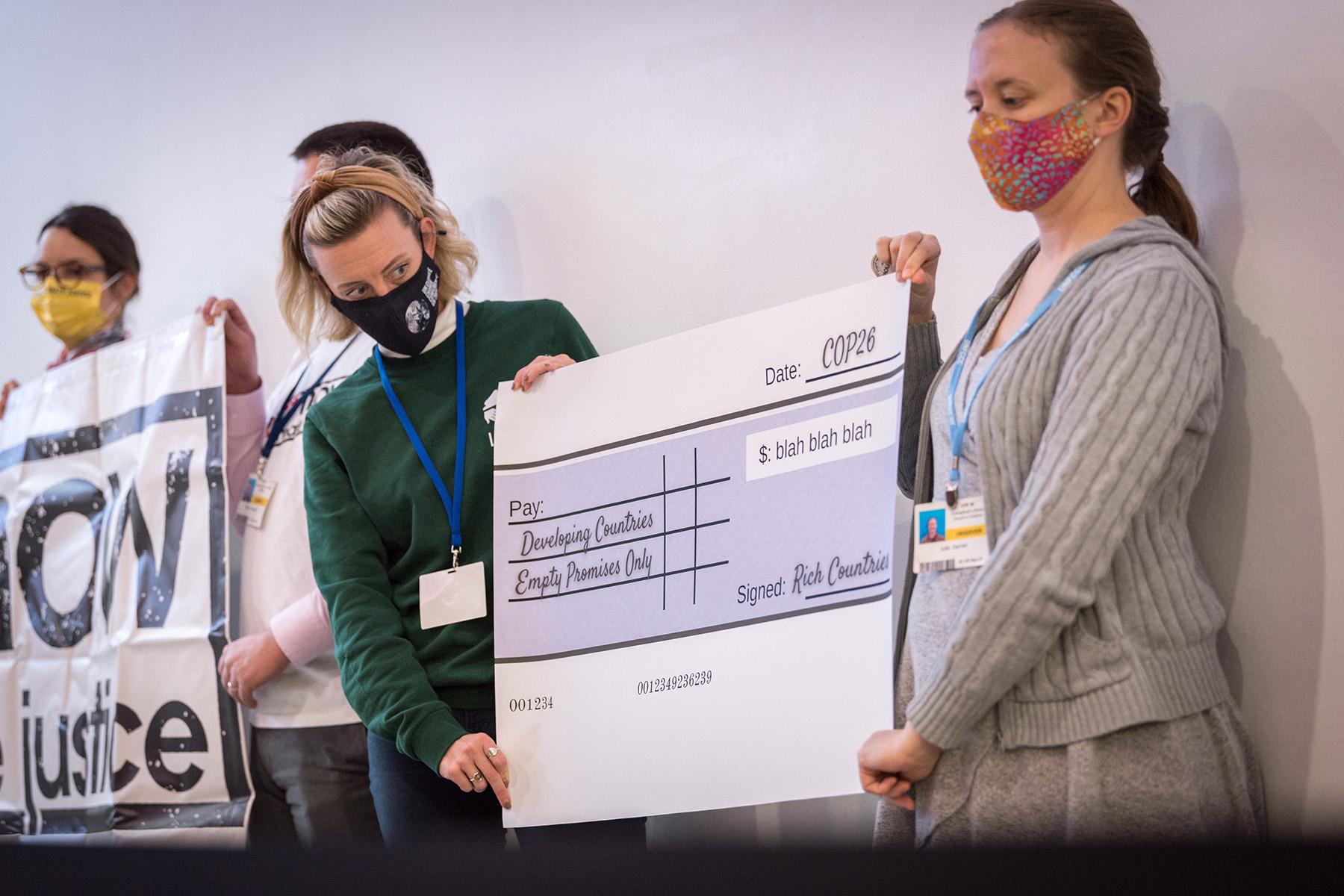 Representatives of faith-based organizations including the ACT Alliance, the LWF and Christian Aid take a stand for just financing at COP26 in Glasgow. Participants presented a large cheque supposedly signed by âRich Countriesâ promising to deliver âEmpty Promises Onlyâ to developing countries, as a sum of âUSD Blah Blah Blahâ. Photo: LWF/Albin Hillert

(LWI) – The gift of life is inseparable from the health of the earth. Therefore, after the first week of negotiations at the UN climate conference COP26 in Glasgow, the delegates of The Lutheran World Federation (LWF) urge negotiators to “keep 1.5 alive!”

In his opening address to world leaders gathered at COP26, the Secretary-General of the United Nations, António Guterres, was clear: “The six years since the Paris Climate Agreement have been the six hottest years on record. Our addiction to fossil fuels is pushing humanity to the brink. We face a stark choice: Either we stop it – or it stops us.”

Rev. Dr. Chad Rimmer, LWFs Program Executive in the Department for Theology, Mission and Justice, observed negotiations about how countries calculate their progress towards reducing carbon emissions to “net-zero”.

“Net-zero” is calculated by comparing how much carbon a country takes out of the atmosphere with the amount of carbon they produce. However, Rimmer suggests, “this financial-market-based way of calculating ‘net-zero’ emissions does not account for the actual destruction of the Earth and loss of biodiversity. To say it plainly, rich countries could continue to extract and exploit lands, as long as they can pay to offset that carbon somewhere else.”

“Such market-based thinking – or advanced capitalism – is what got us into this crisis,” Rimmer explains. “So, while we need markets to incentivize countries to comply with commitments laid out in their Nationally Determined Contributions, we also need non-market-based thinking to hold nations accountable to real change.”

Rimmer sees the role that churches and people of faith can play in contributing to non-market approaches to carbon reduction. “We need to ensure that local knowledge about oceans, watersheds, forests, mountains, and grassland ecologies will somehow be ‘accounted for’ in all of this. Nature-based, non-market mechanisms will help us safeguard biodiversity and the integrity of precious ecosystems, which are the true measures of the sustainable health of the Earth.”

Around the world, people, communities, churches, and civil society are raising their voices calling for ambition, action, and concrete commitments towards climate justice.

At previous COPs, many of them would be heard in the halls of the COP venue itself. But this year, access has been severely limited due to COVID-19 restrictions, unequal access to vaccines, and changing requirements. This left many representatives from the Global South sitting at home, unable to reach Scotland.

Their participation and civil society engagement are vital to push for meaningful changes that will protect and support vulnerable groups: women, youth, indigenous people, people from vulnerable communities. This inclusiveness has been a call of faith-based and civil society actors at previous COP meetings and has become even more urgent at COP26.

LWF youth delegate Nora Antonsen from the Church of Norway attended the first week of COP26 in person. “I am here to raise the voice for those who are not heard,” she said.

A large part of the LWF’s delegation is following COP26 online and has, for that reason, had limited access to proceedings. While most plenary discussions and many side events are streamed online, it has not been possible to participate directly. “Often, there is no opportunity to participate by asking questions or commenting actively,” said Michelle Schwarz from the Lutheran Church of Saxony, Germany. “Also, the immediate exchange among those attending the same event online is limited.” To alleviate this for the LWF delegation, she created a separate chat room for LWF delegates to reflect on their experiences.

At the close of the first week, LWF General Secretary Anne Burghardt met online with the LWF’s delegation to COP26.

“I have been following your engagement in Glasgow,” she said. “I am deeply impressed by your commitment to climate justice and intergenerational justice. You are representing the LWF in an inspiring manner.”

Burghardt underlined the LWF’s commitment to the care for God’s creation. From the Assembly in Dar es Salaam in 1977 until today, the LWF has regularly taken a strong position, “articulating the issue as a matter of justice and care for the most vulnerable, who often can’t speak for themselves.” Thanks to the youth leadership, strong advocacy has occurred at the UN climate conferences and in LWF member churches.

“It is so vital that you make the voice of the LWF heard at COP26,” Burghardt said. “Share the message that we as Lutherans, we as Christians do care about creation, about the climate change and the justice issues related to it.”