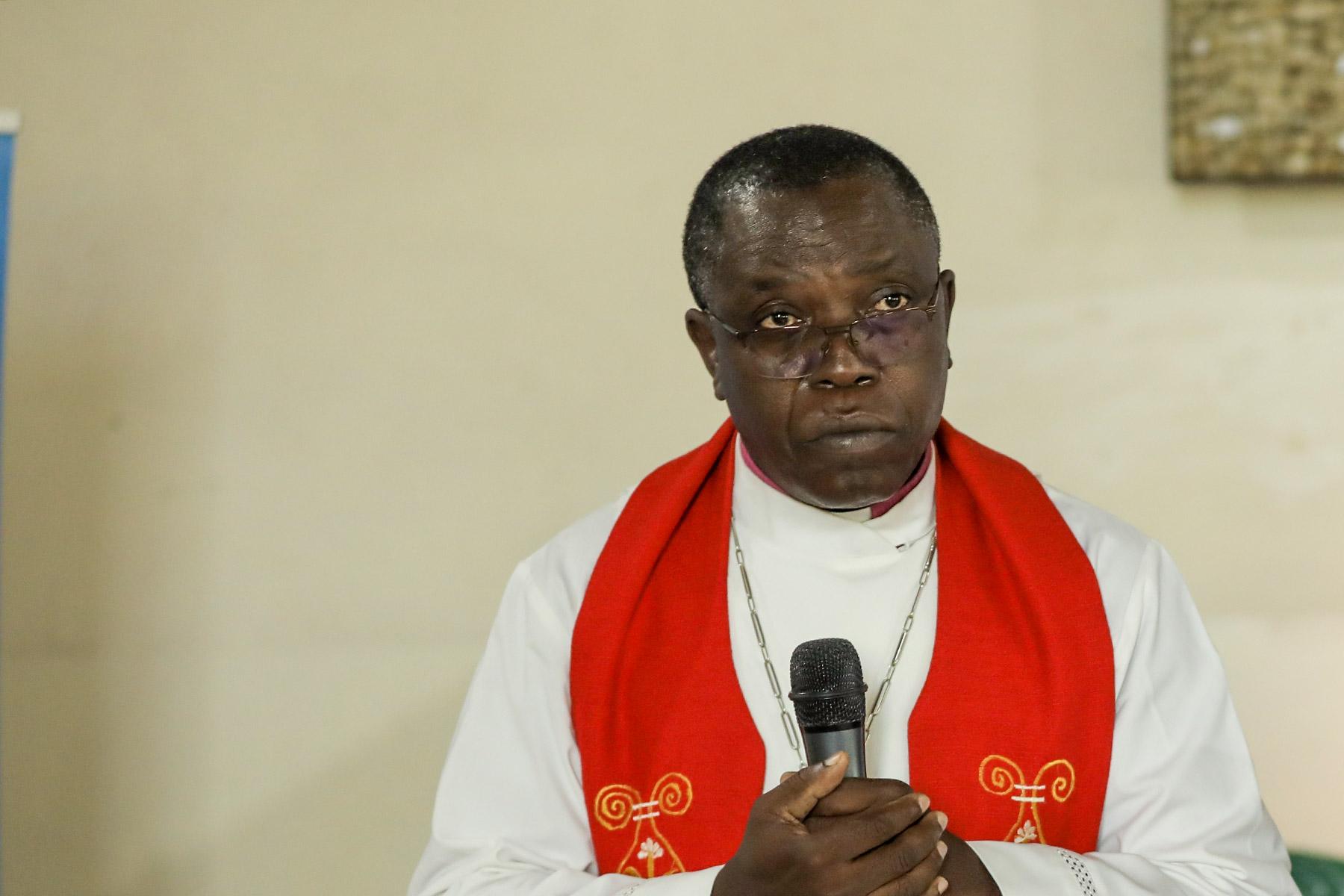 (LWI) - Tell us about your background, growing up and schooling?

I grew up in the south of Adamawa, Northern Cameroon, the fourth born in a Christian family of eight. The region was relatively calm, and the church was a central part of my life. My early schooling was at a primary school of the Evangelical Lutheran Church in Cameroon (EELC) and I later proceeded to a Protestant college of the same church.

I studied theology at the Lutheran Theological Institute in Meiganga, and at the Protestant University of Central Africa (PUCA) in Yaoundé, where I obtained my Bachelor’s degree. I took a break from theology and enrolled at the Pan-African Institute of Development in Douala, where I obtained a post-graduate diploma in organizational management. Afterwards I enrolled at the Faculty of Theology at PUCA, where I graduated with a Master’s in theology. I did my doctorate studies at the University Institute for International Development in Yaoundé, graduating with a PhD in New Testament studies in 2019.

I was ordained in 1998, after which I served as chaplain at the church’s schools until 2002. The best way to describe my profession is both as a teacher and a pastor.

Which means you still teach theology at church institutions?

Yes and no, I’ll explain. I worked as a chaplain for four years, after which I taught at the EELC Bible school, this time in the north. I returned to the parish where I continued pastoral work before I was elected regional bishop of the Central and Southern Ecclesiastical Regions. I served in that position for four years, before returning to the theological institute in Meiganga to lecture in the New Testament. I was elected as national bishop on 21 July 2021 and installed on 28 November in a festive worship service presided by The Lutheran World Federation (LWF) President Archbishop Dr Panti Filibus Musa.

What are some of the lessons that you bring from teaching into church leadership?

First, teaching is a job that I love. Because, as a pastor in a parish, you teach as you train the team of church workers, and as you share the gospel. Teaching becomes an integral part of the pastoral ministry. Not only do we share the knowledge and experience we have as teachers, but we also receive a lot by reading, questions from the students, and learning from them. Along the way, we also discover our shortcomings, which allows us to rectify and correct ourselves.

But I must say that as a teacher, I also came to appreciate one dimension of the ministry that concerns me a lot, it is about young people. This is because one of the things that we often say in our African churches, which I am convinced is a mistake, is that the youth or the children are the church of tomorrow. That is not true. Once they are baptized, they are the church of today. And we must learn to deal with them and give them a space in which they can express themselves in their own way. This also allows them to become engaged in the church, to understand the church better. And later, if they ever become leaders, they can also bring additional value to the growth, development, and even consequent change in the church.

“It is important for us to revisit theological teaching and introduce a language of education that takes into account African realities.” National Bishop Dr Jean Baïguelé, Evangelical Lutheran Church in Cameroon

What are your perspectives on theological education in the continent generally?

One of the issues with which we struggle as African churches is theological education that matches the actual needs of the churches, their members and communities. Most of the theology that is taught is based on Western models. It is important for us to revisit theological teaching and introduce a language of education that considers African realities. While the substance of the Word of God is the same, the form in which the gospel is taught and proclaimed must reflect our realities.

For example, how do we teach catechesis in the church itself? Could this be one of the reasons why many of our young people are leaving our traditional churches, and moving from one place of worship to another because there is no satisfaction? And how do we fulfill those expectations? I believe that this must come through faith education. Our theological formation institutes should provide spaces of reflection and exchange of experience because our contexts also vary. By working together as churches in Africa, we can address these needs, because what we are increasingly seeing on our continent is a proliferation of cults in the guise of preaching the gospel.

Do churches have the professional and human resources to deal with this gap?

While we don't have enough professional and financial resources to address this challenge efficiently, we can begin somewhere. Let us take areas such as gender and women’s participation that are neglected. In Africa, the woman is the custodian of education: she is the one who, in reality, holds the family together. This is not to imply that a man doesn’t play an important role, but childhood education, everyday family life and teaching revolve around the woman. Yet in [many of] our church institutions, we rarely provide the possibility for our women to be educated theologically.

If our young people grow up in contexts that also favor women’s theological education, they are likely to be influenced by more women who are well educated, and this will give a new impetus and consequent development in our churches. Until we give serious thought to women’s theological education, there is a lot that our churches are missing and that is very unfortunate.

On the latter, do you see potential for change?

Yes, but a lot more needs to be done. Take the church of which I preside as bishop. After the EELC’s historic synod decision to ordain women in 2009, the first three women pastors were ordained in 2012. But what percentage of women today have access to theological education, or even training to a higher level? Very few. Out of the 12 ordained pastors in the church who hold a PhD, only one [Rev. Dr Jeanette Ada Maina, LWF Vice-President for Africa] is a woman. And it was only early this year, that a woman has been appointed to teach at the theological institute. This is a huge delay. And that is why I also welcome LWF’s efforts to set up the Hélène Ralivao Fund to advance women’s theological training and leadership in Africa.

You mentioned growing up in a “relatively calm” region, what has changed?

The tension over unequal distribution of the country’s national resources and governance between the North and South has been compounded by other factors, including tension between Christians and Muslims. The influx of refugees following the Boko Haram insurgency in Cameroon’s western neighbor Nigeria and intermittent fighting in the Central African Republic in the east create additional anxiety in the community with increased extortions, abductions and even killings. Out of the 500 EELC congregations, 200 are affected by insecurity, other Christian churches too. In the western region, for example, where we have 90 congregations, at least 45 are in very insecure areas. It means pastors can no longer host or visit Christians to share the gospel because they risk being kidnapped, arrested, or killed. Recently, a catechist boy, who was going to celebrate a prayer service in a village was shot dead. Such attacks create a lot of fear among congregation members.

When farmers are forced to flee their villages and seek refuge in urban areas, they abandon their harvests, crops in the fields and livestock, which leads to deficits at economic and nutritional levels. Displaced children can spend up to two years without attending school. All this creates physical and psychosocial suffering in families, and they can no longer actively participate in the life of the church and contribute to its development. Overall, insecurity slows down the work of the church.

Are there any steps by religious leaders to minimize the tension?

Sometimes the conflict is politicized, and the government can be very slow in responding to the attacks on villages. However, as faith leaders, we feel there is willingness to support us in finding a solution together. In 2019, we created a small organization called ACADiR (Cameroonian Association for Interreligious Dialogue) that brings together Catholic, Protestant and Muslim leaders for dialogue toward peacebuilding. We meet once every two months.

What does it mean for you and your church to belong to the LWF communion?

I recall LWF’s support toward a group from the EELC that visited the Lutheran Church of Christ in Nigeria in 2021, to share experiences about our ministries. We have a lot in common. We learnt a lot from the visit, our weaknesses, our strengths, and areas in which we could collaborate, exchange personnel and so forth.

When it comes to belonging to the LWF, my church, and I as the leader, do not see us as belonging to an institution, but as belonging to a family. Being a member of the LWF communion is understanding that we all share similar concerns. We have a common vision, and we can move forward, relying also on each other’s contribution, and praying for one another.

The Evangelical Lutheran Church in Cameroon has 350,000 members, and it joined the LWF in 1971.