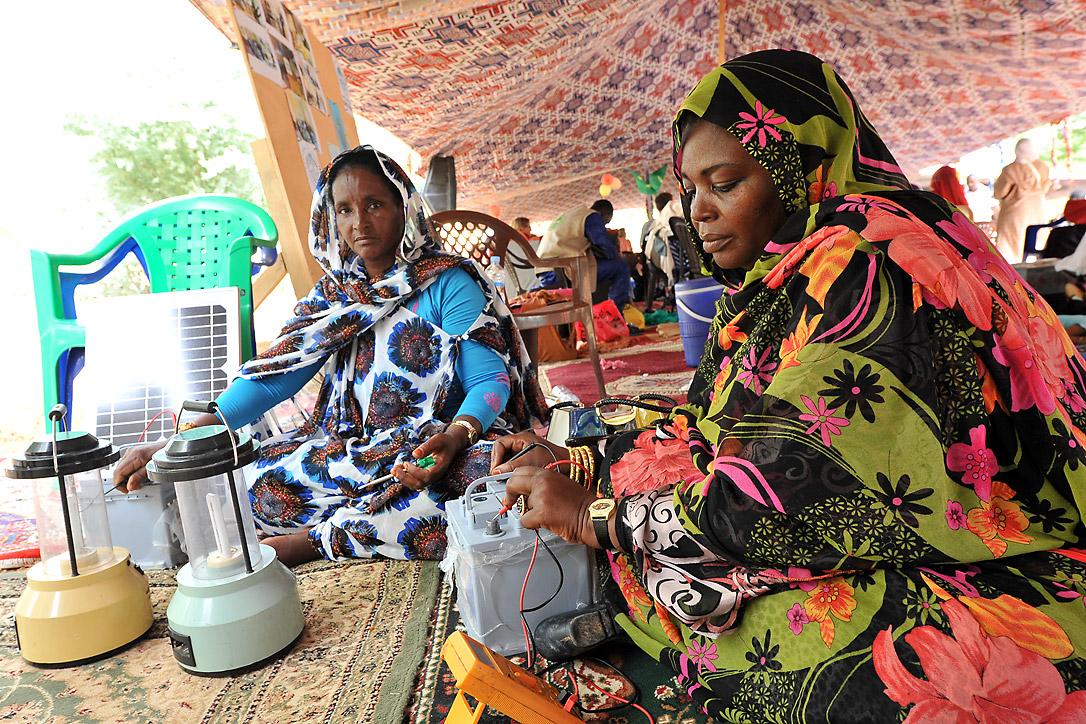 NOUAKCHOTT, Mauritania/ GENEVA, 7. March 2016 (LWI) – It is rather unusual to see women in Mauritania handle large technical equipment, but Bowba mint Brahim and Aichetou mint Khayling connect the large batteries and the solar panels with practiced ease. They are used to overstepping the boundaries set for women in a traditional society by now - ever since the Lutheran World Federation (LWF) came to their village in rural Mauritania and made a very unusual offer.

The Brakna and Hodh El Chargui districts, where their village is, is a yellow spot on the map. It’s far into the Sahel, a Sahara desert offshoot with arid climate and very challenging living conditions, a scarcely populated place with few little villages, where most people make a living from agriculture.

“Who wants to go to India?”

LWF selected their village Trarza for a community development project eight years ago. Part of the project was to cooperate with Barefoot College from India in training some of the local people from these villages in solar technology.

“Then they asked the community: who wants to go to India for training on solar technology?” Aichetou recalls.

The typical choice would have been to send some of the men – many are introduced to mechanical work at an early age. But then the community started thinking, Aichetou recalls: “The formation was for six months. That is a very long time to be away when you have family and animals to care for,” she says. “So we women decided to go, because the men could continue to care for the animals.”

They are very passionate and highly committed to this work. The people call them ‘women engineers’.

This is how the decision was made to send six illiterate women from the rural Mauritanian districts to India to study solar technology. From January to July 2008 they acquired knowledge and skills on how to handle solar panels and solar cookers. As a graduation gift, they received a small battery and a solar panel. It has changed their lives – and that of the village.

“They are able to install and maintain solar panels in many villages. They have earned respect and good reputation from various communities,” Kasongo Mutshaila, the LWF Country representative in Mauritania, says. “They are very passionate and highly committed to this work. The people call them ‘women engineers’.”

Bowba opened a business for charging phones. “I can maintain and repair the battery, so it will last a long time” she says. “People pay me when I let them charge their phones.” Her next goal is to obtain a bigger battery, which could power a refrigerator.

“Before I went to India, at 9 pm the village was utterly quiet”, Aichette mint Khayling recalls. “We had to eat early, when it was still light. Our children could not learn their lessons.” Because many children have to do farm work and household chores when they get home from school, they had to do their homework by candlelight in the evenings.

Now there is solar-powered electric light to brighten the house in the evening. The children can study, meals can be cooked later. Some families have bought a TV and  receive information from outside their village. The women can pay for the school equipment and medical care for their children with the money they earn from their work

By now, solar lighting is fully adopted by the altogether 20 villages in Brakna and Hodh El Charghui. The six “women engineers” who went to India are essential to maintain the equipment.

In 2015 LWF trained and supported 618 people in Brakna  and Hodh El Charghui districts to use and maintain solar cookers and solar panels.