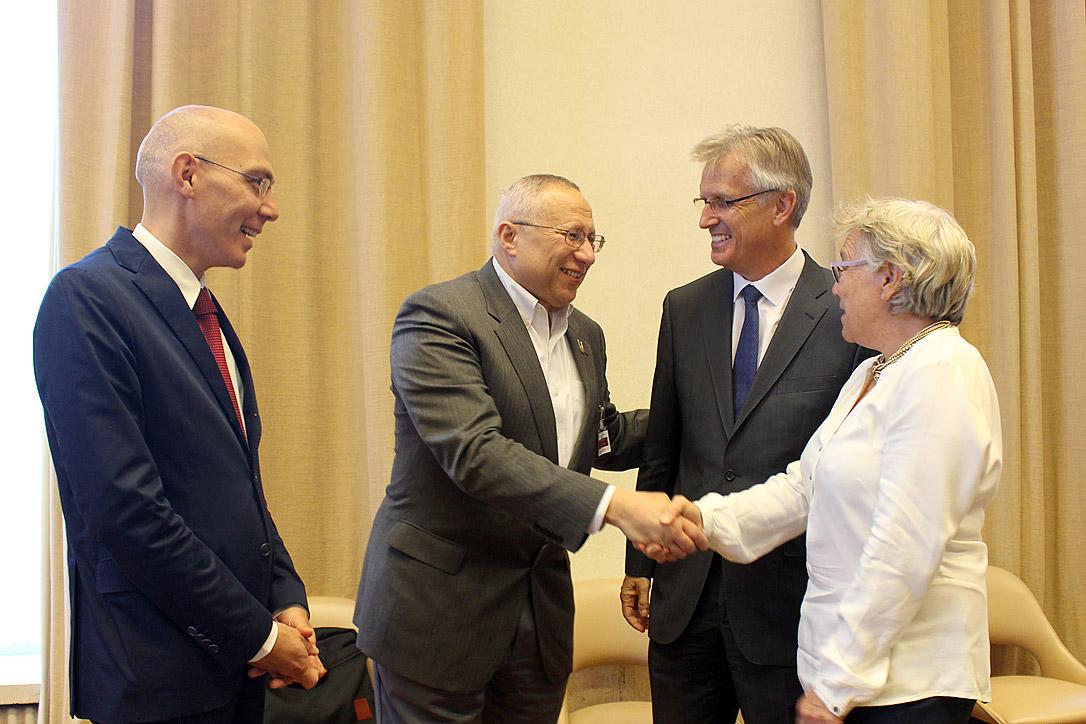 Speaking at a side event to the 66th session of the UN High Commissioner for Refugees (UNHCR) Executive Committee meeting, the Assistant High Commissioner for Protection, Volker Türk, not only applauded the work of faith-based organizations in light of record refugee numbers in the world today but called for greater cooperation between them.

He highlighted Welcoming the Stranger, a document produced by faith organizations, including The Lutheran World Federation, that affirms faith leaders’ commitment to refugees and stateless people.

Türk said he personally gave out copies to UNHCR staff when he travelled, in a bid to encourage them to work closely with faith organizations.

The push for closer working relations between faith-based organizations stemmed from a 2012 High Commissioner’s dialogue. “When it comes to faith and what it means in humanitarian settings, we had a watershed moment in 2012, which focused on the inter-linkages between faith and community work and protection,” Türk said. “If there was one dialogue that generated most follow-up it was this one. What we thought would not have been possible has become mainstream.”

Faith-based organizations are often at the forefront of efforts to protect refugees and first in the line of aid delivery. In the Central African Republic and in Myanmar, it was clear the role of faith leaders showed an alternative to the divisive elements, Türk said.

The LWF and Islamic Relief Worldwide work together on hygiene and peace-building projects in Jordan and earthquake relief in Nepal. The directors of both agencies were panelists at the side event, People of faith for people in need.

LWF General Secretary Rev. Dr Martin Junge said that as well as Welcoming the Stranger, a memorandum of understanding between the LWF and IRW was the second powerful outcome of the 2012 dialogue. It cemented their relationship. “This was an intentional engagement in view of our common vocation to serve refugees and internally displaced people.”

In Jordan, both organizations made a point of being seen to work closely and to talk about peace-building. “Faith is all about pulling together instead of being derailed by extraneous pressure. We want to counter that message and say it is possible to work together and that there is an alternative,” Junge added.

Faith-based organizations have a key role to create space in the hearts, minds and souls of people so that their respective societies protect refugees. He reminded nations that beyond the moral duty to protect was also a legal obligation. States have signed the Refugee Convention 1951 which sets out the duty to protect.

Islamic Relief Worldwide CEO Dr Mohamed Ashmawey said that unfortunately, abuse of faith occurred and had done so throughout history. “We don’t hire angels, we hire human beings. Some people use faith the wrong way. Faith should be uniting us, not dividing us. If we can do something about it, with the help and blessing of the UN, we can really do something to save this world for our children.”

Nan Buzard, Executive Director of the International Council for Voluntary Agencies, highlighted the power of faith organizations in refugee crises. This year’s Sergio Vieira de Mello prize for humanitarian action went to a group of faith leaders in the Central African Republic for their work to create dialogue and protect communities. She also cited the Ebola outbreak in Sierra Leone, in which faith leaders taught skeptical communities that the disease was real, urging people to take precautions against it.

Türk said the panel was proof of what co-operation could bring. “When the debate around asylum gets too much, this is a time for response, in particular from faith leaders and organizations who have an outreach that is very different from the one we [UNHCR] have.”