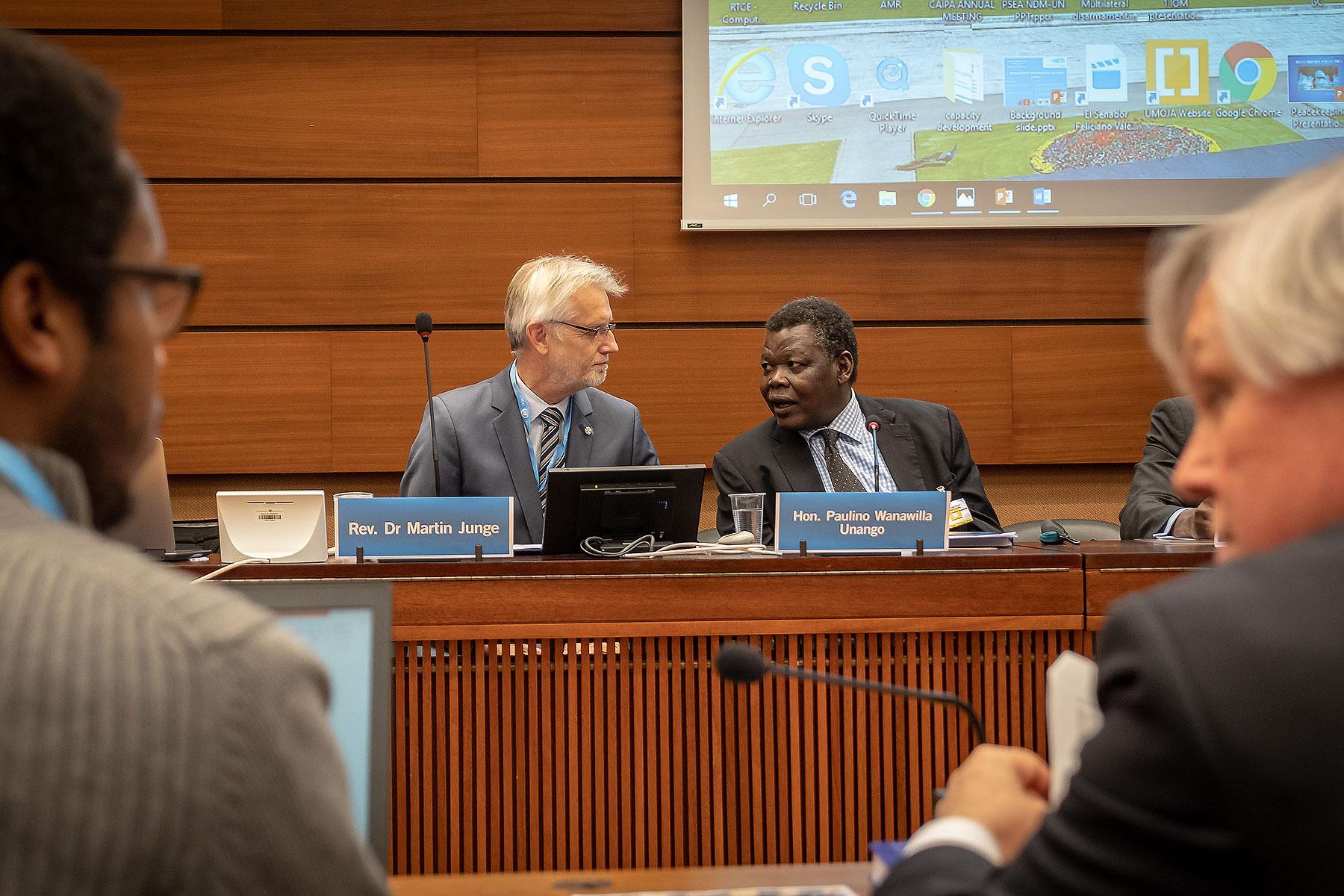 (LWI) - The Lutheran World Federation (LWF) and representatives of both civil society and faith-based actors in South Sudan have noted the government’s growing openness to address human rights violations through constructive engagement with the United Nations (UN) mechanisms as critical to lasting peace in the East African country.

At a side event organized by the LWF during the ongoing 40th session of the UN Human Rights Council, panelists highlighted adoption of the bulk of the 233 recommendations as demonstration of the government’s commitment toward tangible promotion of human rights on the ground.

South Sudan has been engaging with the UN human rights mechanism, the Universal Periodic Review (UPR), since November 2016, five years after the country became independent, ending more than two decades of conflict. In addition to accepting 203 of the UPR recommendations, the government presently includes civil society representatives on its Inter-Ministerial Committee on Human Rights.

The Lutheran communion has been accompanying South Sudanese inside and outside the country throughout the years of conflict, in which over 2.5 million people died, and millions more were displaced and suffered gross human rights violations.

In his opening remarks at the side event, General Secretary Rev. Dr Martin Junge affirmed LWF’s humanitarian work dating back to the 1980s, and currently supporting over 300,000 people inside South Sudan, and hundreds of thousands more in neighboring Ethiopia, Kenya and Uganda. In recent years, support has increased for capacity building in human rights advocacy, targeting both government institutions and civil society organizations (CSOs).

UPR is “our priority”

In his keynote address, the Minister of Justice and Constitutional Affairs Honorable Paulino Wanawilla Onango expressed appreciation for LWF’s role and for the UN human rights mechanism. He described the UPR as “our priority” and “the best instrument of engagement because it is not imposed, and it is about accountability.” Citing the many urgent challenges of a young country still compounded by run-down infrastructure and a myriad of post-conflict related issues, he urged continued support that benefits all citizens of the country.

Responding to the minister’s address, Mr Barney Afako, a member of the Commission on Human Rights in South Sudan, said transition from conflict to long-lasting peace will require transitional justice that is “robust and holistic” in approach, including a commission of truth, reconciliation and healing. “Collaboration from government leadership, faith-based organizations and civil society is required to ensure support for transitional justice so that years of violence, rape and killings can come to a complete stop.”

Collaboration from government leadership, faith-based organizations and civil society is required to ensure support for transitional justice so that years of violence, rape and killings can come to a complete stop.

CSO representative Ms Lilly Grace Delfin commended the government for its ongoing work in developing a gender policy and efforts that promote economic empowerment for women and girls’ education. She however noted there are critical gaps in addressing gender-based violence, mentioning as an example, the many instances of light punishment for perpetrators of sexual violence against girls and women. 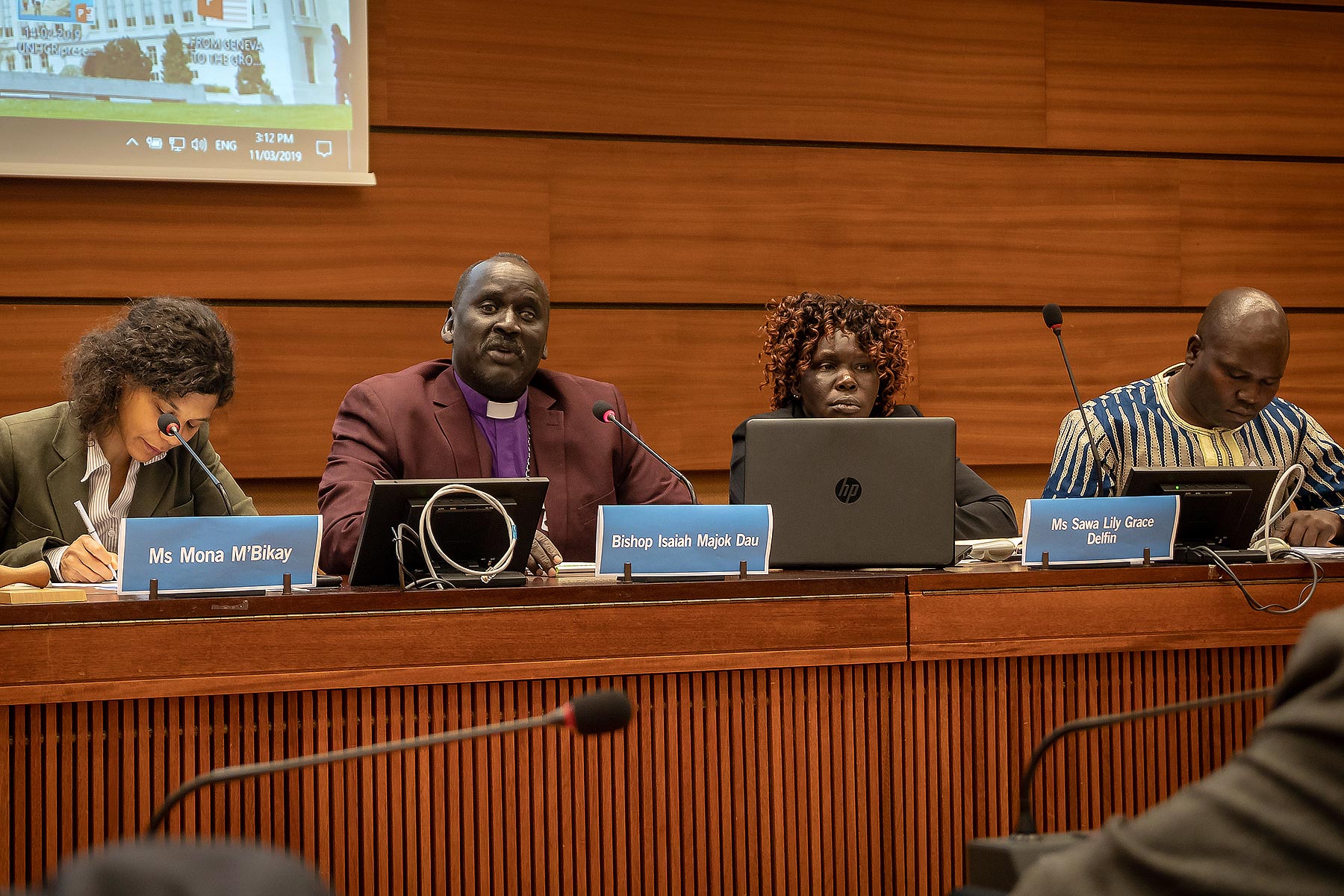 A culture of peace

Explaining the South Sudan Council of Churches’ Action Plan for Peace, Bishop Isaiah Dau said the majority of South Sudanese are generations of “children of war”–-during the 1955-1972 or 1985-2005 period. “Independence in 2011 was the highest point but 2013 was the lowest point when internal conflict started, because it shattered the hope we had.”

Ongoing efforts toward lasting peace and reconciliation, he emphasized, is a process. “But we want to embark on this as a foundation to build a culture of peace among our people.”

Other speakers at the side event included CSO representative Mr Jame David Kolok Joshua, who said the UPR process has created a conducive environment for civil society to openly engage with key government sectors such as gender, education and security. Still, he added, “the voices of all victims are not coming out clearly because of fear, suspicion and very limited opportunities for participation. We need to ensure the victims are part and parcel of this process.”

On 12 March, the civil society representatives and LWF staff also followed the interactive dialogue between the UN South Sudan Human Rights Commission and the Human Rights Council. And earlier today, the human rights’ defenders gave an update on the constructive engagement around the UPR during an LWF-hosted panel at the Ecumenical Center.

Ethiopia: LWF in solidarity with church and people yearning for peace
news
ttttt

Passion for the world: in conversation with Martin Junge
news
tttttt