Poems give voice to refugees’ dignity and hope 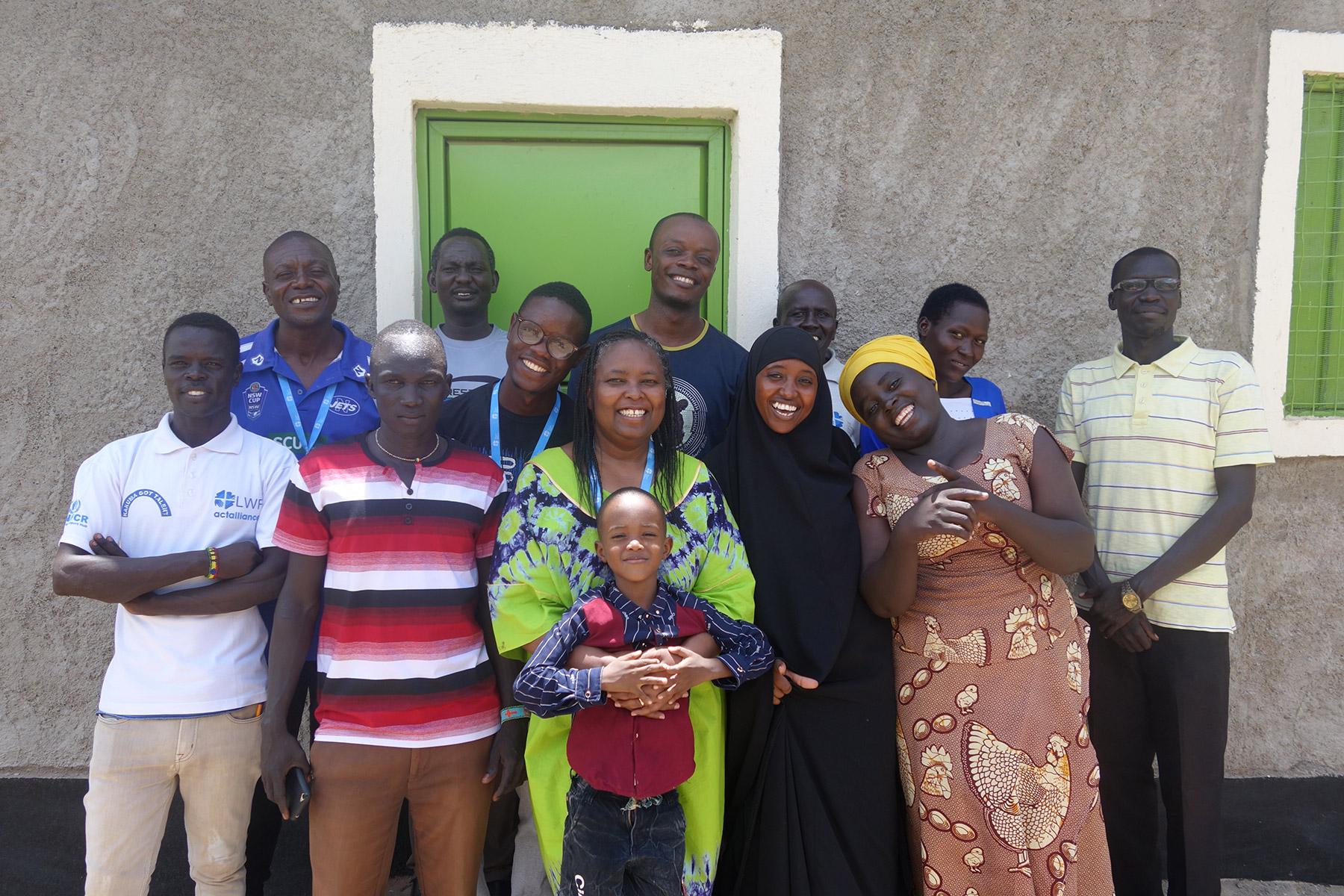 Residents from Kakuma refugee camp in northwest Kenya pose for a photo after taking part in an LWF-run workshop to write poems for the âI am Hopeâ publication. Jackline Irankunda is pictured in the front row, furthest to the right. Photo: LWF/O. Schnoebelen

(LWI) - Refugees from Somalia, Burundi and Uganda took center stage during a webinar marking the launch of a volume of poetry that showcases their hopes and aspirations, alongside the fears and challenges they face in their daily lives. The ‘I am Hope’ booklet of refugees’ poems was produced by the Lutheran World Federation (LWF) and published by its country program in Kenya, Djibouti and Somalia.

LWF General Secretary Rev. Dr Martin Junge, together with UN officials Gillian Triggs from the United Nations Refugee Agency (UNHCR) and Françoise Mianda from the United Nations Office for Human Rights (OHCHR), joined the three author-panelists to read some of their poems and to celebrate the resilience and inspiration they offer to members of their communities in Kenya and beyond.

Moderator Mary Obara, program coordinator for LWF Kenya, introduced the authors – Said Abukar from Somalia, Jackline Irankunda from Burundi and Mark Okello from Uganda. She noted that all three are members of the KADANA refugee platform which works to protect the rights and wellbeing of all refugees and asylum seekers, as well as promoting peaceful coexistence with local host communities in Kenya.

Obara highlighted that the LWF has been serving in Kenya for over five decades, not only responding to emergency needs, but also working to empower women and men to have a voice in local, regional and national decision-making processes. She explained that the book of poems grew out of an LWF workshop with refugees aimed at drawing out the unique contribution that each one of them makes to the life of his or her community. While testimonies from those who have fled their homes often focus on the ordeals they have endured, she stressed that this volume showcases the courage and dignity they bring out of “dark places of violence, injustice or suffering.”

“I am the unknown soldier [..] my message is yet to reach the world”

Abukar, who has lived in Kenya since the 1990s, is chair of the KADANA network and works in Nairobi in various volunteer initiatives, including community health worker. He described how the network started in 2018 “as a dream of wanting the voices of refugees to be heard all over the world and for people to know that we are part of the solution,” rather than simply being seen as recipients of aid and assistance.

“I am the lamp in the community for the women”

Irankunda, who has lived in Kakuma refugee camp in northwest Kenya for nine years, is treasurer of the KADANA network. Due to internet difficulties in the camp, she explained via prerecorded video links that she works in women’s empowerment and in counselling for couples facing difficulties in their relationships. Describing herself as “a peacemaker and problem solver,” she said she encourages others to know their rights and to live with dignity and self-respect.

“I am the morning sun. I wonder: What are my abilities?”

Okello from Uganda, who lives in the Dadaab camp in northeast Kenya, serves as the local chair of KADANA. He is a part of a consortium called ‘connected learning in crisis’ and started his own tertiary refugee student network. He stressed the responsibility of refugees to participate in community life and inspire others “to see that there is light at the end of the tunnel.” As a teacher, he said, it is important for host communities to treat refugees with respect and to understand that “how you treat a person is the way they will go on to treat others in the community.”

Françoise Mianda, Chief of the East and Southern Africa Section of the OHCHR, recalled the decision of the Kenyan government to close both Kakuma and Dadaab camps by the end of June 2022. She said it is good to see the contributions of non-governmental organizations – including KADANA - in the Universal Periodic Review process and it is vital to remind the Kenyan authorities “to find the most appropriate, most durable and rights-based solutions for refugees and asylum seekers” living in the camps. Stressing the inalienable rights of each individual, she said: “Hope, for me, is one of the most important tools in life because no matter the situation, the difficulties, the challenges, if you have hope and faith in yourself, in God and in a better future, you will thrive and prosper.”

A key challenge for the global community is indifference in the face of these [refugee] numbers.

LWF General Secretary Martin Junge, noted that the poems express a strong sense of community, “always asking ‘who I am’ in relation to the community I belong to.” He referred to the high number of people who forcibly displaced today that are currently seeking protection, adding that a key challenge for the global community is “indifference in the face of these numbers.”

The need to address the root causes of the refugee crisis was echoed by Gillian Triggs, UNHCR’s Assistant High Commissioner for Protection, who said the number of refugees and asylum seekers has doubled over the last decade. The latest report, released on 20 June, World Refugee Day, showed that those figures continue to rise – even during the COVID-19 pandemic – and that there are now “82.4 million people seeking asylum or displaced, or refugees or stateless.” This is “a serious global problem for each of us to take responsibility for,” she insisted, adding that the LWF is “an important partner for UNHCR and we greatly value that partnership.”

Watch the full webinar here: I am hope

The three quotes above (“I am the unknown soldier,” “I am the lamp,” “I am the morning sun”) are taken from poems in the ‘I am Hope’ booklet.