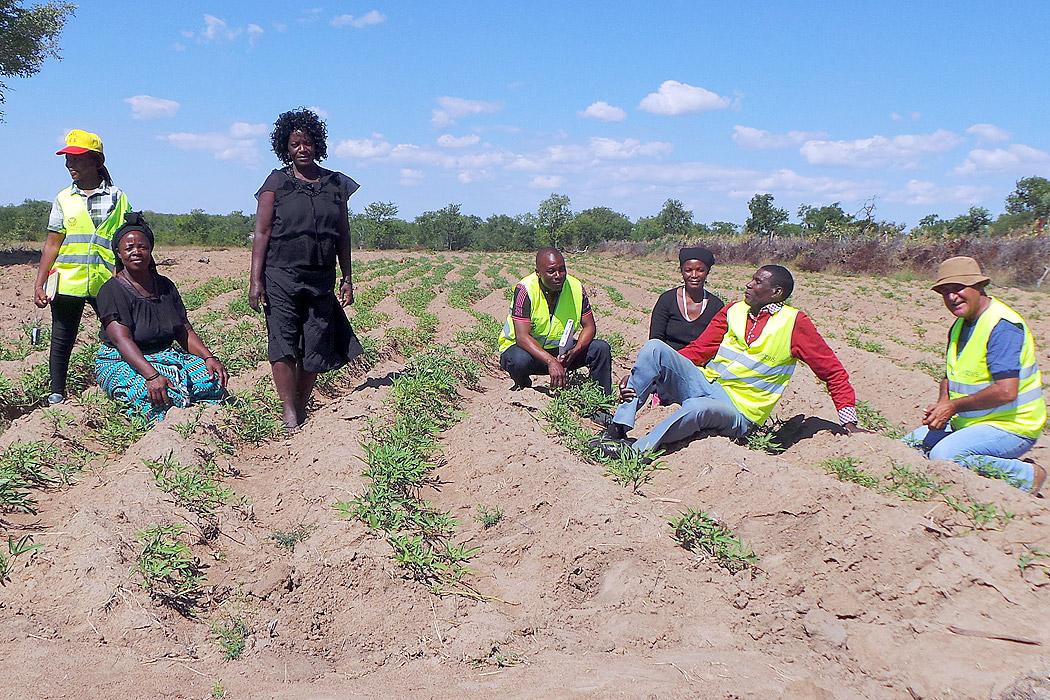 (LWI) – The last four years for subsistent farmers in Onkanga village, in Angola’s southern province of Huila have been anything but predictable. Since 2010, life here has revolved around a three-season cycle of heavy rainfall and severe flooding; followed by a drier but short cultivation period with some harvests; then prolonged drought with severe food and water shortages.

In 2014 it rained early, and heavily, says 63-year-old Tucangui Tyululu. “We planted the seeds that we had received last year. And, although we could not cultivate a big piece of land, we have a good field of maize and millet, and expect good returns until the next harvest in April or May.”

Like thousands of vulnerable families in Huila and Cunene provinces that were severely affected by prolonged drought in 2012 and 2013, the widowed mother of five got through the most critical periods with emergency food assistance from The Lutheran World Federation (LWF), Evangelical Lutheran Church of Angola (IELA) and other members of the ACT Alliance forum in the country.

“It was the worst drought in years. It did not rain here, not even a drop. It was horrible,” Tyululu recalls. “All the seeds we planted did not germinate and there was no grazing grass for our livestock. Our traditional wells dried up and animals started dying of hunger and thirst. Whatever food we managed was given to children, and we elders used to stay for two to three days without a proper meal, only depending on wild fruits.”

Today, she is grateful for the drought response assistance—maize meal, beans, cooking oil and salt—coordinated through the LWF Department for World Service (DWS) Angola program. “Thank God we have passed through the critical period. Without this help, I would not be standing here,” she adds. Families also received agricultural seeds and were taught how to prevent diseases such as cholera.

Tyululu’s household can now manage two meals per day, but she is still cautious about their food security in the future. “We still don’t know if the rains will continue or stop again as it happened in the last years,” she says.

Food and Awareness Raising on Hygiene

The drought that also hit neighboring Namibia was the worst the region had experienced in over a quarter of a century, with the border province of Cunene needing urgent assistance for more than 600,000 people—half of its population.

In Onepole one of the driest places in Cunene, “there was no drop of rain the whole year; a total dryness that we have never seen before,” recalls Kaponha Daniel Sikongo, who has served as the area community administrator for the last 22 years.

Sikongo praises LWF Angola, the Lutheran church and ACT Alliance for the support to nearly 3,500 people “as they struggled through a period of malnutrition, disease and huge losses of livestock.”

While the government provided some assistance, it was low and often interrupted by inaccessibility to the remote areas due to bad road conditions. The LWF-coordinated support also offered meaningful spiritual and material support. “We received food and we supported the most vulnerable people—the aged, orphans, the handicapped and families headed by women,” he adds.

The communities in LWF’s drought-response areas also received millet and maize seeds for planting, hand hoes, and hygiene kits alongside awareness education to promote sanitation and hygiene and prevent diseases.

Significant but not Enough

Michael French, DWS program officer for Angola, says that despite the timely rainfall this year, the impact of the drought in Angola’s southern provinces is far from over. As many families did not have food stocks, “they started eating the under-ripe crops from their fields. Therefore, the returns from this year’s crop though significant, may not last as long as expected,” he said, following a recent assessment visit to Angola.

DWS Angola interim country representative Mr Abrao Mushivi says without additional assistance, it could take communities like Onepole three to four years to recover from the drought. “All together, families lost about 60 percent of their 2 million cattle—in Cunene province alone—and they rely on these stocks for livelihoods,” he notes.

Mushivi tells of one farmer who had 72 head of cattle but now has just 12. “In some cases, there is no hope yet. It is not just a loss of livelihood but according to their tradition, it is also a loss of dignity,” he emphasizes.

LWF Angola and its local partners continue to work with the drought-recovering communities. Most families are now able to eat one meal a day consisting of maize meal or millet, watermelons, squash, pumpkins or green vegetables from their fields.

The local authorities commend the LWF and partners’ sanitation and hygiene promotion efforts in several villages, pointing out that no new reports of waterborne diseases had been reported in the respective emergency response areas. The water, sanitation and hygiene (WASH) component included distribution of aqua tabs for water treatment, rehabilitation of several water pumps, construction of animal drinking troughs and potable water points, benefiting more 7,000 people and their livestock in several villages.

Cultivation of drought-resistant food crops is part of the training on disaster-risk reduction. LWF Angola has distributed cassava and sweet potato cuttings to organized farming groups in Huila and Cunene. Such groups also set aside seed multiplication and demonstration plots for the newly introduced crop varieties. The local administration provides a tractor to plough the land.

IELA Bishop Tomás Ndawanapo says pastors are reporting that the situation is improving a year after the drought, but he is still concerned that “hunger is still felt” in some areas. The assistance from the LWF and its partners has been very important, he adds. “We will always be ready to collaborate to support our people.”

Mushivi emphasizes the need to maintain ongoing advocacy among the populations, “with a strong focus on restoring and securing sustainable livelihoods.”

The LWF is the longest-serving international non-governmental organization in Angola, where the DWS humanitarian work began in 1986 in collaboration with IELA. Long-term priorities include education and literacy skills, advocacy for basic rights and capacity building to increase household food security and diversified livelihoods.