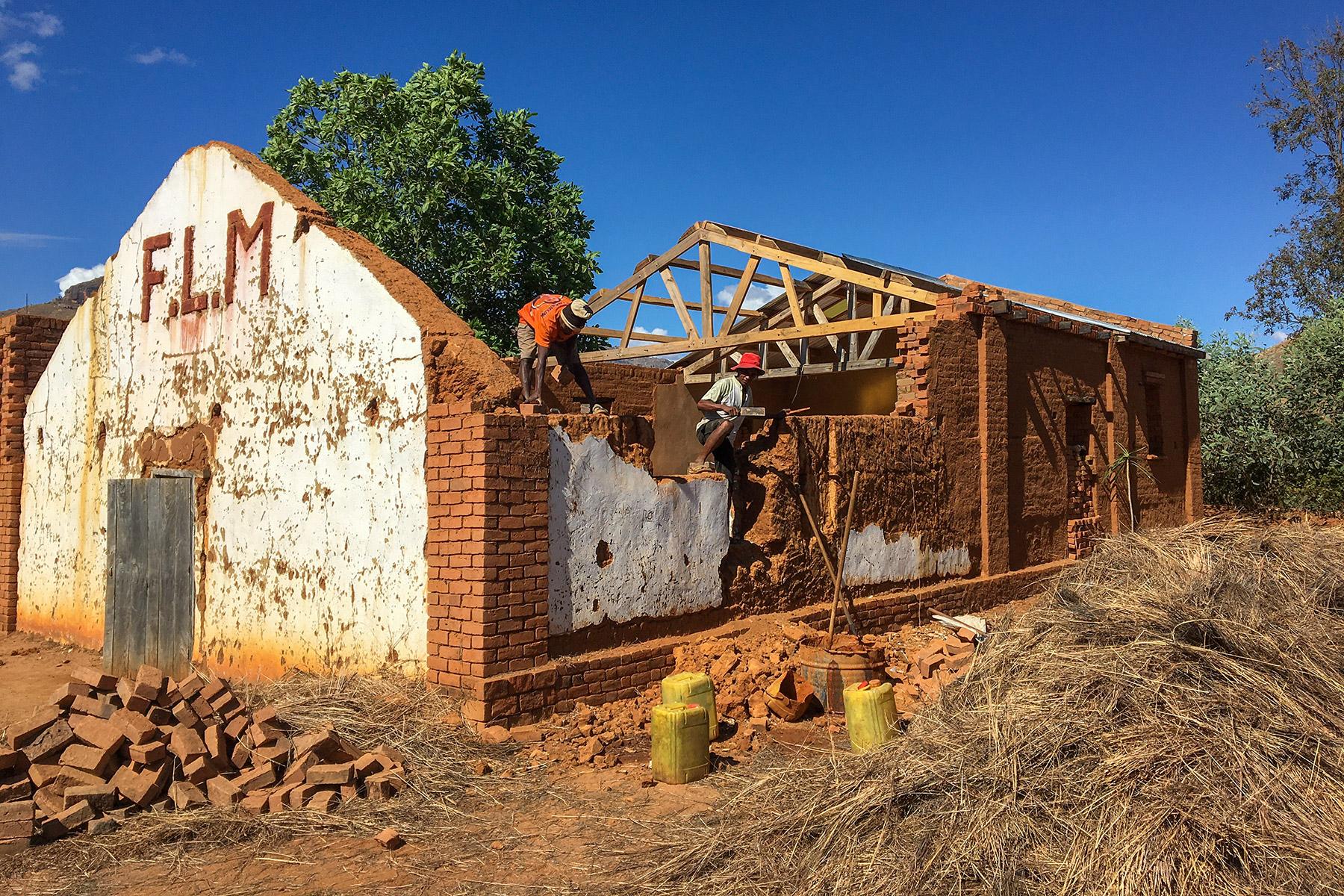 In Vohitsaoka, central Madagascar, Malagasy Lutheran Church volunteers, have been reconstructing their local church building that was almost entirely destroyed in the last two cyclones that hit the region. Photo: LWF/Y. Bovey

(LWI) – A project managed by hundreds of volunteers in the Malagasy Lutheran Church (MLC) is proving how talent and expertise from local inhabitants, congregations and public authorities can promote citizen participation and inclusion in community development.

MLC initiated the Use Your Talents (UYT) project eight years ago to sensitize and persuade church leaders and congregation members to use Christian talent for the betterment of church and community in Madagascar. It is part of the Diaconal Mission of the Church unit.

A recent report on numerous activities that have been accomplished goes to show how UYT has become a rallying point to meet different needs in the community. The Lutheran World Federation (LWF) has been supporting the UYT project since 2017 through its Member Church Projects’ program.

With administrative support from the MLC and technical guidance from local authorities, hundreds of volunteers in the 300 districts of Madagascar’s Lutheran church have contributed their gifts and talents to upgrade feeder roads, bridges and health service facilities. They have also set up waste management pits, constructed public toilets, water wells and fountains, and houses among many other initiatives throughout the 24 synods of the MLC in the country. Care for vulnerable families through an initiative called FIMA, is a core responsibility toward the welfare of orphans, the widowed, single-parent households, people with disabilities, ex-prisoners and destitute families.

“When the church's mission is clearly understood by Christians, they use their talents to accomplish it. This has been proven by the number of facilities built and groups of vulnerable families identified,” UYC coordinator Mr Antoine Andriambonimihanta noted in the report.

In Ambalavao district, MLC’s Central Region Synod, for example, the UYT cares for patients with extreme needs at the district hospital, 20 people living with disabilities and six deaf girls. Similar care is replicated in other districts such as Tanambao, where UYT volunteers support 18 widows, and a number of people living with mental disabilities.

In the district of Fisaka, weekly donations make it possible for “people with disabilities to get money to buy soap and other necessities,” and basket weaving provides additional income toward schooling for orphans.  In other districts, Andriambonimihanta noted, “the rate of unemployed women has decreased, their children are in school and their lifestyles have improved.” He added: “Members are eager to volunteer and take up their responsibility. The community is showing solidarity, the capital is increasing, and it lightens everyone’s burden.”

Members are eager to volunteer and take up their responsibility. The community is showing solidarity, the capital is increasing, and it lightens everyone’s burden.

One of UYT’s activities is a savings and credit scheme called VOATSINAPY, which mobilizes financial contributions among hundreds of families.  It starts with the formation of an association of a maximum of 25 people, who know and trust each other. They make monetary contributions to a common fund according to each member’s financial capability, allowing borrowing and repayments following the set procedures. “Anyone can become a member of VOATSINAPY. It strengthens solidarity within the society,”  Andriambonimihanta noted.

In Vohitsaoka, a rural commune in Ambalavao district, central Madagascar, around 90 percent of VOATSINAPY members say the savings’ group is effective, according to MLC program coordinator, Mr Alfred Rasamimanana. “Some have been able to buy livestock, others land that can be inherited by their children, some have been able to improve and increase the business they used to do, some have expanded the land they cultivate. Others have even noticed that family life is becoming more stable because of the increased income,” he said.

Rasamimanana  noted involvement in these new activities “also has a positive impact on the life of the church,” including increased participation. “They are currently expanding and improving the church here in Vohitsaoka,” he added.

UYT activities depend on the talents and skills of the very groups that require assistance. In the case of FIMA, the district animator brings together at least 10 vulnerable families and submits their applications to a church committee, which forms a vulnerable families’ committee to identify the talents of the respective family members. With the support of consulting technicians, the committee assesses the talents and skills to be strengthened, after which partners including the local government, sister churches, entrepreneurs and local development workers provide the required capacity building.

A similar procedure applies to the infrastructure projects for which the beneficiary community submits a request to the church. The latter oversees the setting up of an  committee comprising the different stakeholders to oversee implementation of the work and maintenance upon completion.

On a recent visit to Vohitsaoka, LWF Program Support Officer for Diakonia and Development Mr Yann Bovey met with some of the UYT staff and volunteers and witnessed some of the ongoing work at community level.

“When I arrived at the local church in Vohitsaoka, I was struck by the contrast between the isolation of the place, reachable through a rough road, and the vitality of the local community,” Bovey said. UYT volunteers were busy reconstructing the church building that was almost entirely destroyed in the last two cyclones that caused massive destruction in central Madagascar. 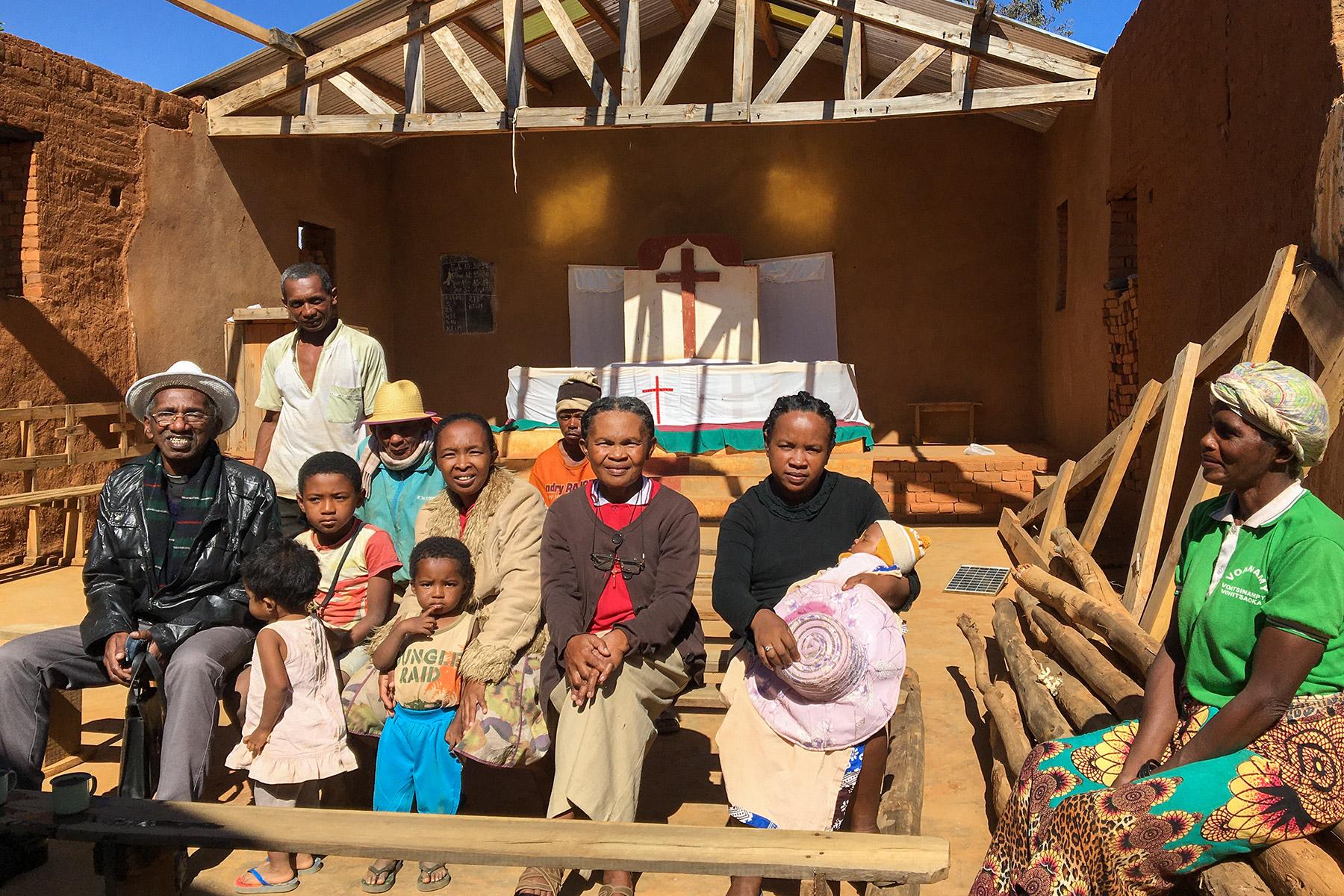 In a meeting with the local VOATSINAPY saving group members and their families, “they proudly shared their achievements,” Bovey recalled. “But what truly inspired me was the sense of ownership that I witnessed: the people there are not beneficiaries but true project holders,” he added.

The Malagasy Lutheran Church has over 4 million members and it is one of the four main Christian denominations in Madagascar. With 25 synods, including one in Europe, it sends missionaries to Bangladesh, Cameroon, Papua New Guinea, Thailand and Tanzania, mostly as pastors or in diaconal ministries, such as medical personnel. It joined the LWF in 1950, and it is led by the church’s President Rev. Dr Dennis Rakotozafy.