LWF Reaches Out to Displaced Populations in Central African Republic 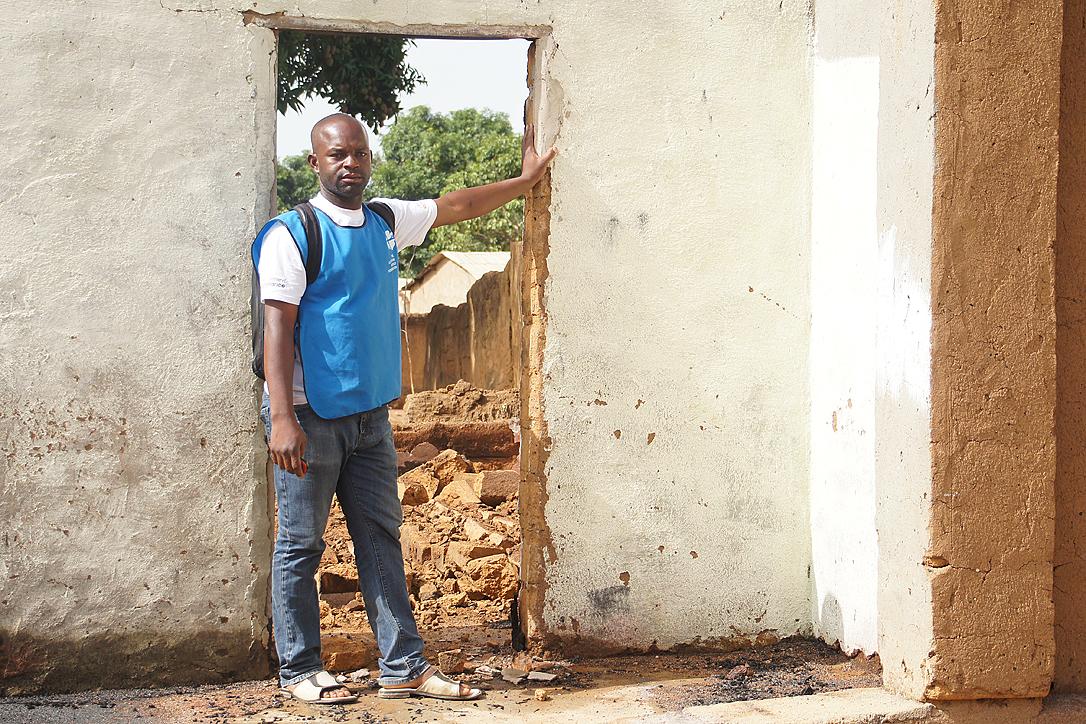 (LWI) - In the small village of Kbetene, along the western axis of Bohong-Bouar in Central African Republic (CAR), Yvonne Ndongoe, says she cannot recall the number of times her family had to flee to the forest to escape attacks by militant groups in the sectarian fighting that has gripped the country since March 2013.

“After four months of difficulties living in the bush, we decided to come back, although we knew we had already lost everything,” the mother of seven explains, pointing to her partially thatched house Across the fence, her neighbor David Danwen, who also returned home recently, points to his empty house, as he places more thatch on the roof which he has been rebuilding. The rainy season has started and his family needs protection, he adds.

In the populous Bohong village with over 19,700 residents, many are coming to terms with the extensive destruction during attacks by armed groups associated with the Seleka rebels in August 2013 and the retaliations by the anti-Balaka vigilantes in Ouham Pendé prefecture. Armand Yabinti, recently hired as a community outreach officer for The Lutheran World Federation (LWF) emergency program in CAR surveys the ruins around him, as he silently walks to what remains of his house—no corrugated iron sheets or roofing structure, no room partitions, nor wooden frames for doors or windows—only piles of shattered bricks on the floor. He points to several other buildings in similar or worse conditions, including a small mosque at the corner.

Like Yabinti, almost everyone in Bohong, some 70 kilometers from the regional capital of Bouar, has been directly affected by the sectarian violence. In the August attacks, over 1,740 homes and other buildings were completely destroyed, five people were killed and hundreds were injured, chief Félix Wosso says. Many who fled to the bush or moved in with relatives or friends are cautiously coming back as the rainy season begins, but there is growing fear that armed groups could strike again.

Despite the installation of an interim government in January 2014, the third in a series of political changes and the presence of international peace keeping forces in the country, the cycle of violence and insecurity continue in northern CAR and the western axis. The districts of Bouar and Baboua in Nana Mambéré prefecture where the LWF is providing emergency intervention have been marked by armed attacks and kidnapping, which significantly impede humanitarian access to internally displaced populations. Looting has left families with no possessions and those returning to their destroyed homes sleep on bare ground without mats or blankets.

Since March 2014, the LWF emergency program has been distributing non-food items (NFIs) to vulnerable populations in Bohong and several other villages. Prioritizing women-headed households and people with disabilities, over 3,000 households, have received hygiene kits including soaps, buckets and jerry cans for water, cups, tooth paste and brushes, sanitary packs and underwear for women.

As most of the people were displaced during the critical months of planting and weeding, the LWF has distributed farming tools to 725 families to help them rehabilitate their crop land. The intervention also includes restoration of existing water sources as many of the village boreholes and pumps have been abandoned or destroyed. Shelter reconstruction targets over 4,500 houses in the Bouar-Bohong axis.

Through a cash distribution program that sources basic items from selected local traders, around 1,200 vulnerable households will each receive vouchers equivalent to USD 80 to meet basic needs and improve livelihoods.

In Bouar, the LWF emergency program collaborates with the Evangelical Lutheran Church in the Central African Republic (EEL-RCA), and will support the church’s health centers in the distribution of mosquito nets to protect vulnerable populations from malaria infections.

“But there are still huge gaps in a context where most of the population is distressed by fear and the violence experienced from the conflict,” says Serena Badenhorst, team leader of the LWF emergency program in CAR.

She underlines psycho-social support as crucial for individuals, communities and church alongside the emergency intervention and livelihoods support. “Rebuilding livelihoods goes hand in hand with good mental and physical health,” she adds.

While humanitarian intervention is urgent, the growing insecurity significantly limits access to affected population, Badenhorst notes. “It is difficult for people outside to imagine the logistical and security challenges involved. It takes more time and costs so much more to reach people who are in dire need. While we are trying our best, more resources and support are needed to support civilians caught in the CAR crisis,” she adds.

The United Nations Office for the Coordination of Humanitarian Affairs (OCHA) puts the number of internally displaced persons (IDPs) inside CAR at over 567,630. Around 142,600 of the IDPs are located in 42 sites in the capital Bangui and in host communities including the St Timothy Lutheran parish, which is currently home to around 190 IDPs, a majority of whom are children below 14 years.