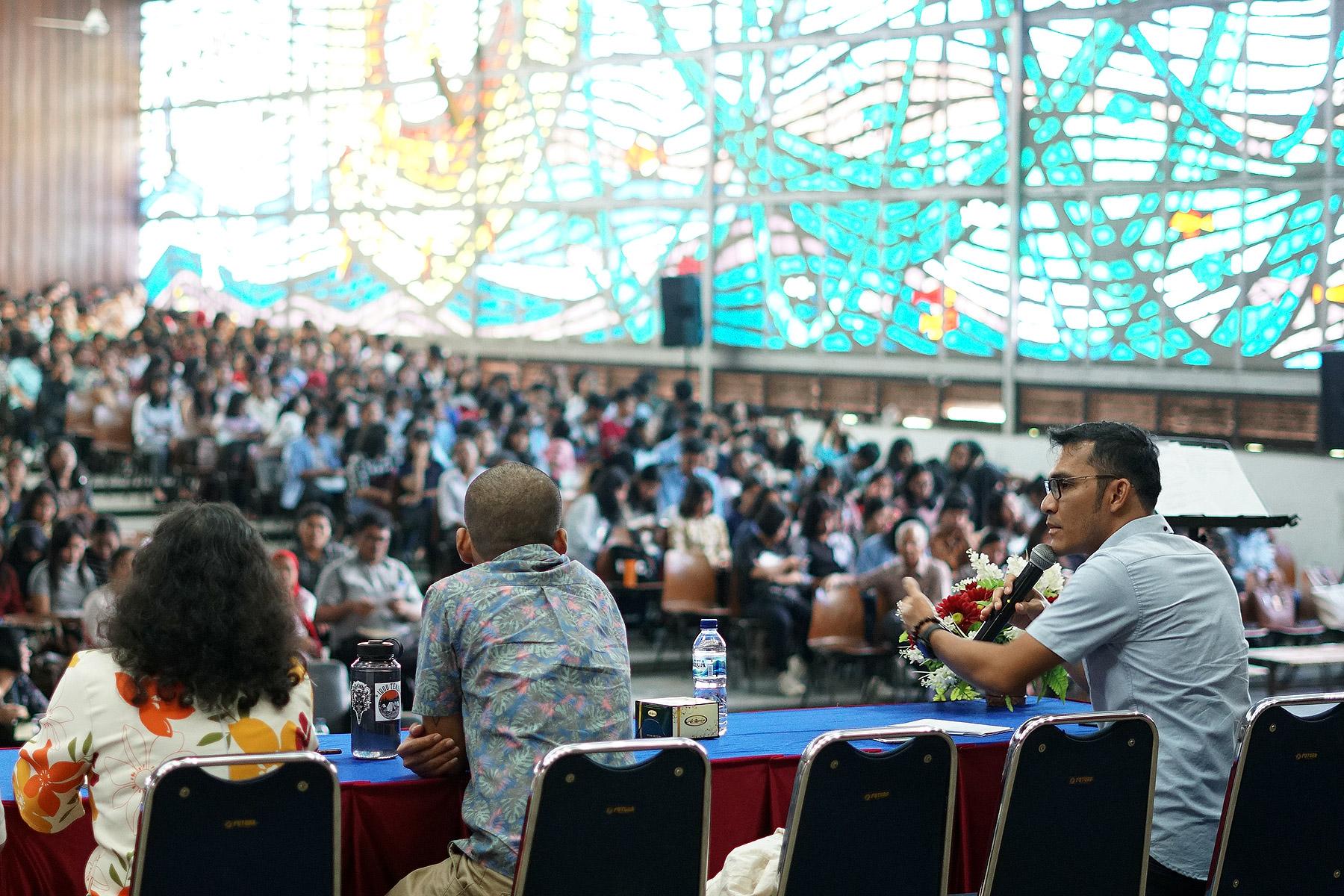 (LWI) – “We need to raise the awareness about the ways in which climate change influences our society – it entails much more than deforestation or waste in the natural environment,” says Fernando Sihotang, Human Rights and Advocacy Coordinator of the Lutheran World Federation National Committee in Indonesia (KNLWF). He initiated an event day with the theme “Bringing climate justice to Pematangsiantar” in North-Sumatra held on 4 December, parallel to the COP25 taking place in Madrid, Spain.

More than 1,200 participants – students, interfaith groups, academics, religious leaders, politicians, government officials and representatives from civil society – attended the day in the Auditorium of the HKBP Nommensen University and supported by the LWF Youth Desk. Paintings from local artists were exhibited during the event, providing additional interpretations of climate justice. 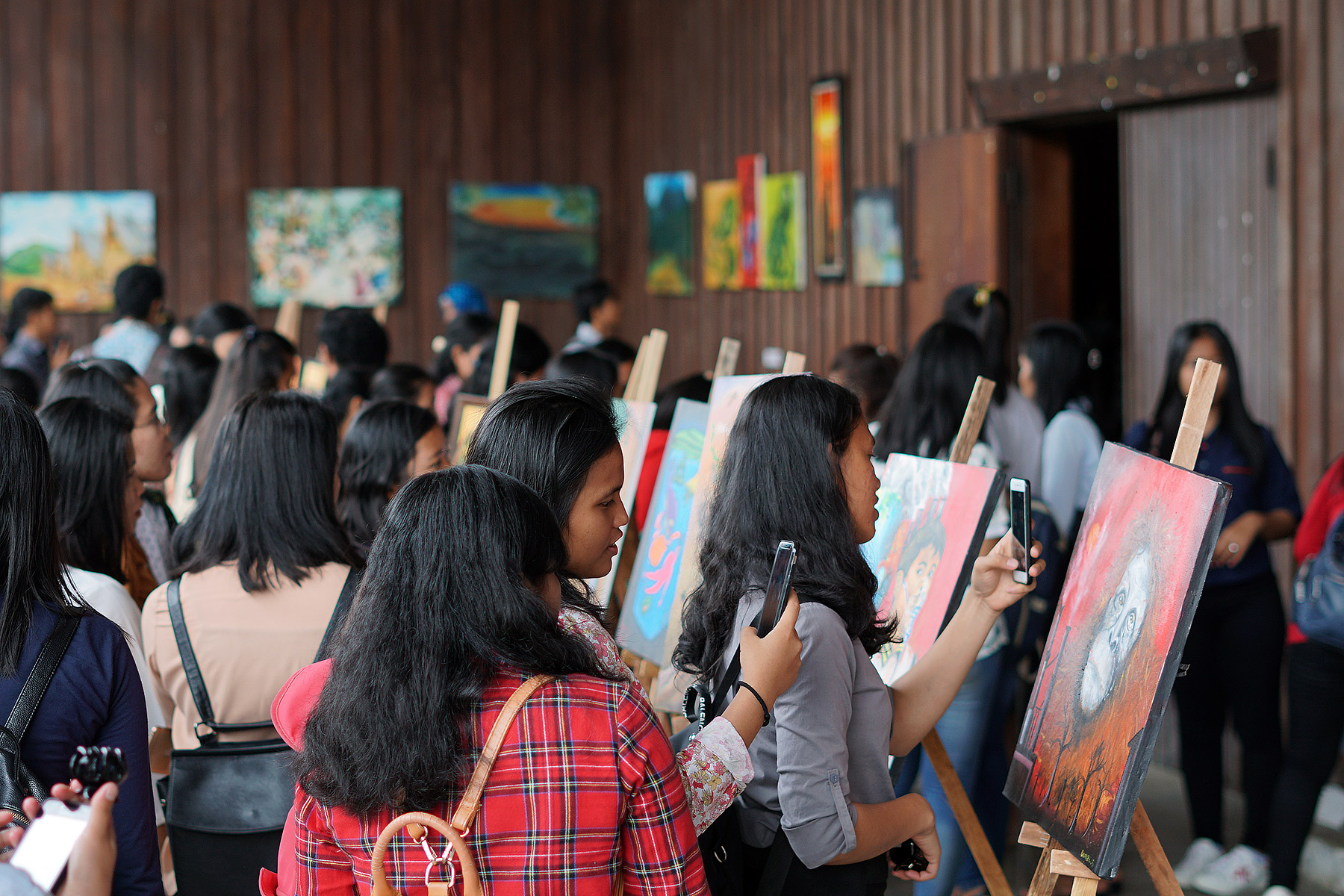 The ecology-themed paintings exhibited during the campaign day attracted a lot of attention from participants.

Bishop Rumanja Purba from the Simalungun Protestant Christian Church (GKPS) encouraged students to actively engage in matters of climate justice and addressing these through “the lens of faith.” He also emphasized the need for religious actors and government bodies to collaborate for climate justice.

LWF Vice President for Asia Desri Sumbayak recalled the LWFs long standing commitment to climate justice dating back to the Sixth LWF Assembly in Dar es Salaam, Tanzania, in 1977 and being taken up in the motto “Creation – not for sale” during the Twelfth LWF Assembly in Windhoek, Namibia in 2017. “God's creation is not to be traded or exploited to the greatest extent only for economic purposes, only to bring profit to some parties,” says Sumbayak. “We forget the balance of nature, we forget justice for the climate, for plants, for animals that are existing around us. Climate justice is a priority issue for LWF and is discussed continuously at all levels and in innovative ways.”

A young climate activist Tumpak Hutabarat shared experiences from travels in the region and encouraged his listeners to "think globally and act locally". He pointed out that climate change already has significant effects in Indonesia as a country and Asia as a continent: small islands in the coastal region are being flooded, in other areas salty sea water seeps into the land for up to 12 kilometers, deforestation in Kalimantran, Borneo, reduces the world’s “green lungs”, damages to the coral reefs in Papua also depletes the fish sources the local inhabitants depend on as a source of food, the ice in the Himalaya mountains in Nepal is melting, Mongolia is hit by water scarcity.

We see a great need for information, exchange and ideas for taking action on climate justice.

“The questions, responses and suggestions coming from the participants were very encouraging,” Sihotang summarizes engagement during the seminar. “We see a great need for information, exchange and ideas for taking action.” There is good reason to look forward to a second seminar day on advocating for climate and ecological justice in the public space planned for 14 December, the day the COP25 in Madrid has ended. “While raising awareness and acting locally we call upon the global decision makers at COP25 not to delay climate action and to strive for ambitious goals to the benefit of all,” says Sihotang.