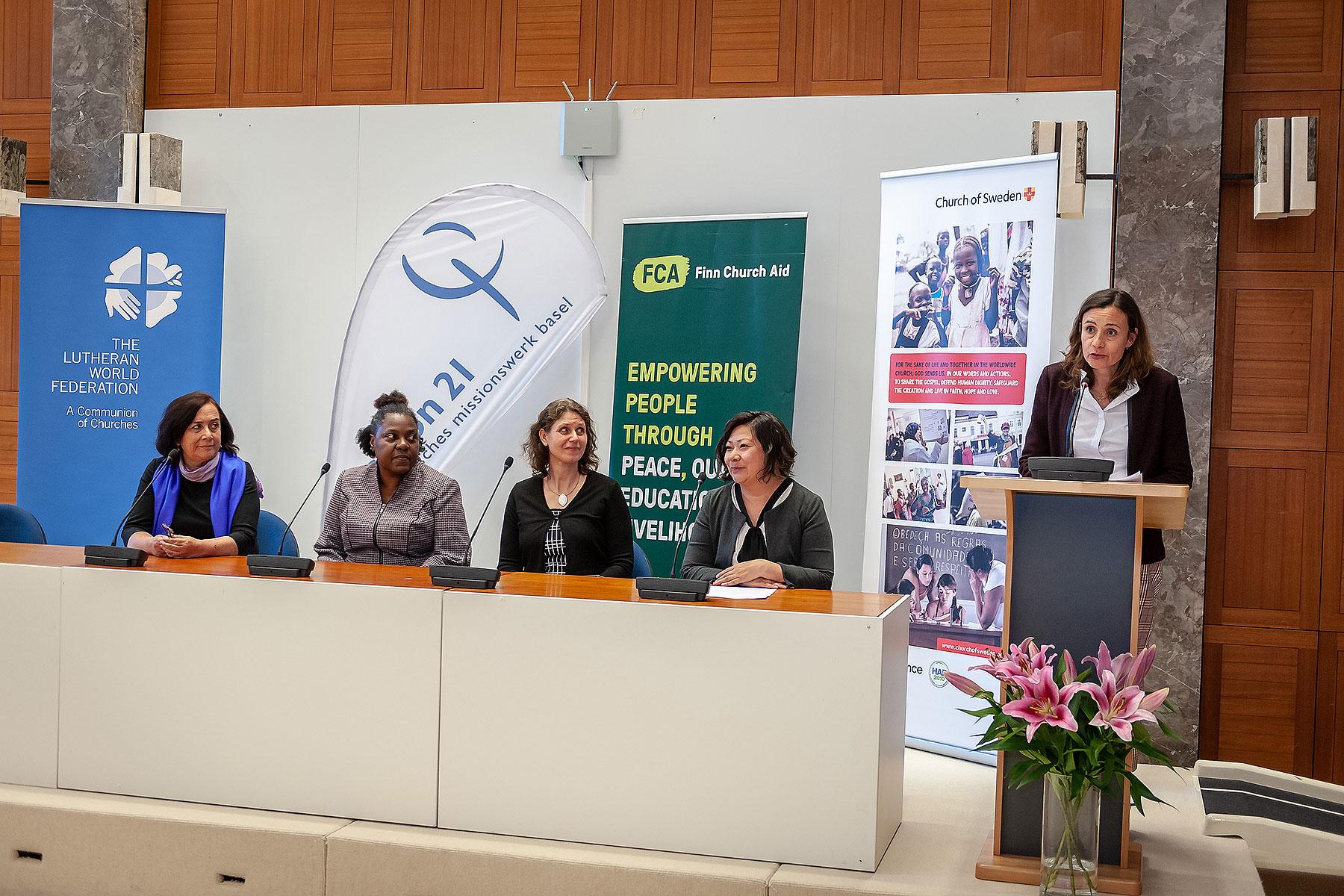 (LWI) - The need to strengthen partnerships and broaden alliances to address the growing pushback against women’s human rights emerged as a shared concern at the launch of a joint publication by five faith-based organizations (FBOs), 6 May, at the Ecumenical Center in Geneva.

Affirming Women’s Human Rights – Resources for Faith-Based Organizations is published by the LWF as a result of a joint initiative of the Women’s Human Rights Advocacy Training  organized by Church of Sweden, Finn Church Aid, Mission 21, The Lutheran World Federation (LWF) and the World Council of Churches. Representatives of the United Nations (UN) including UN Women, international non-governmental organizations, diplomatic missions, some LWF member churches and staff of Geneva-based FBOs attended the launch.

Ms Maria-Cristina Rendón, LWF program assistant for Gender Justice and Women’s Empowerment, introduced the publication on behalf of the five partner organizations. She thanked the FBOs for the enriching collaboration since 2015, when they first organized what has become an annual women’s human rights advocacy training, bringing together up to 50 participants each year.

The yearly training has developed into an important platform to discuss the direct link between the theological understanding that men and women are created in God’s image, and the Universal Declaration of Human Rights affirming the dignity and equal rights of all human beings.

The contribution of faith-based organizations is of utmost relevance particularly in contexts where religion is misused to discriminate, violate or undermine women’s rights.

The publication highlights topics featured at the training with the objective of strengthening the capacity to advocate for women’s human rights from a faith perspective, particularly using UN human rights tools such as the Committee on the Elimination of All Forms of Discrimination Against Women (CEDAW) and the Universal Periodic Review (UPR). It shows the links between religion, fundamentalisms and discrimination, and elaborates subjects such as transformative masculinities, how gender stereotypes are linked to sexual and gender-based violence, and the intersection between Sustainable Development Goal 5 (SDG 5) on gender equality and the other SDGs.

Rendón said “the contribution of faith-based organizations is of utmost relevance particularly in contexts where religion is misused to discriminate, violate or undermine women’s rights.” The five ecumenical organizations, she noted, “have a long-standing commitment to human rights and we share values of inclusion, non-discrimination, a rights-based approach and engagement with gender justice.”

The event created space to highlight the specific focus of each of the partners involved.

Mission 21, has supported several development program leaders in Africa, Asia and Latin America to apply methodologies particularly relating to contextual theology to counter the alarming rise of fundamentalism. The Basel-based organization has also been deeply engaged in capacity building, for example in responding to HIV and gender-based violence, and skills’ development for women as peace builders.

Support from Finn Church Aid includes working with representatives from Nepal at the CEDAW committee to provide input on gender related caste-based discrimination and human trafficking.

Church of Sweden has supported local partners in several countries to engage with the UPR process, and worked closely with theological institutes to promote theological education on gender justice.

Joanna Lilja from Church of Sweden, moderated table discussions on the disturbing trend by governments and strong lobby groups to reverse the gains the UN mechanisms have made in advancing the rights of women at national and global levels.

Addressing participants, LWF General Secretary Rev. Dr Martin Junge affirmed the general feedback from table discussions that “the international human rights instruments that have been put in place are being put into question.”

He noted however that such setbacks should not be reason to feel hopeless but rather moments “to be prophetically defiant,” about faith-based values. “It is not a contradiction to stand for gender justice and to believe in the Triune God. On the contrary it comes together – a theological commitment that we want to continue developing and affirm,” he emphasized.

The LWF general secretary thanked the UN partner organizations for their support to FBOs, and said the task ahead would involve even greater collaboration in promoting literacy on human rights language or terminology. He noted the connection between local and global advocacy in itself will not make much difference until it is nurtured as a process that influences the local reality. Recommendations from the table discussions also called for greater involvement of youth in advocacy for gender justice.

Referring to the SDGs, Junge said FBOs’ engagement is about making everybody flourish, and that is why the Agenda 2030 goal of “‘leaving no one behind’ makes so much sense to us.”