Breaking the silence about sexual violence 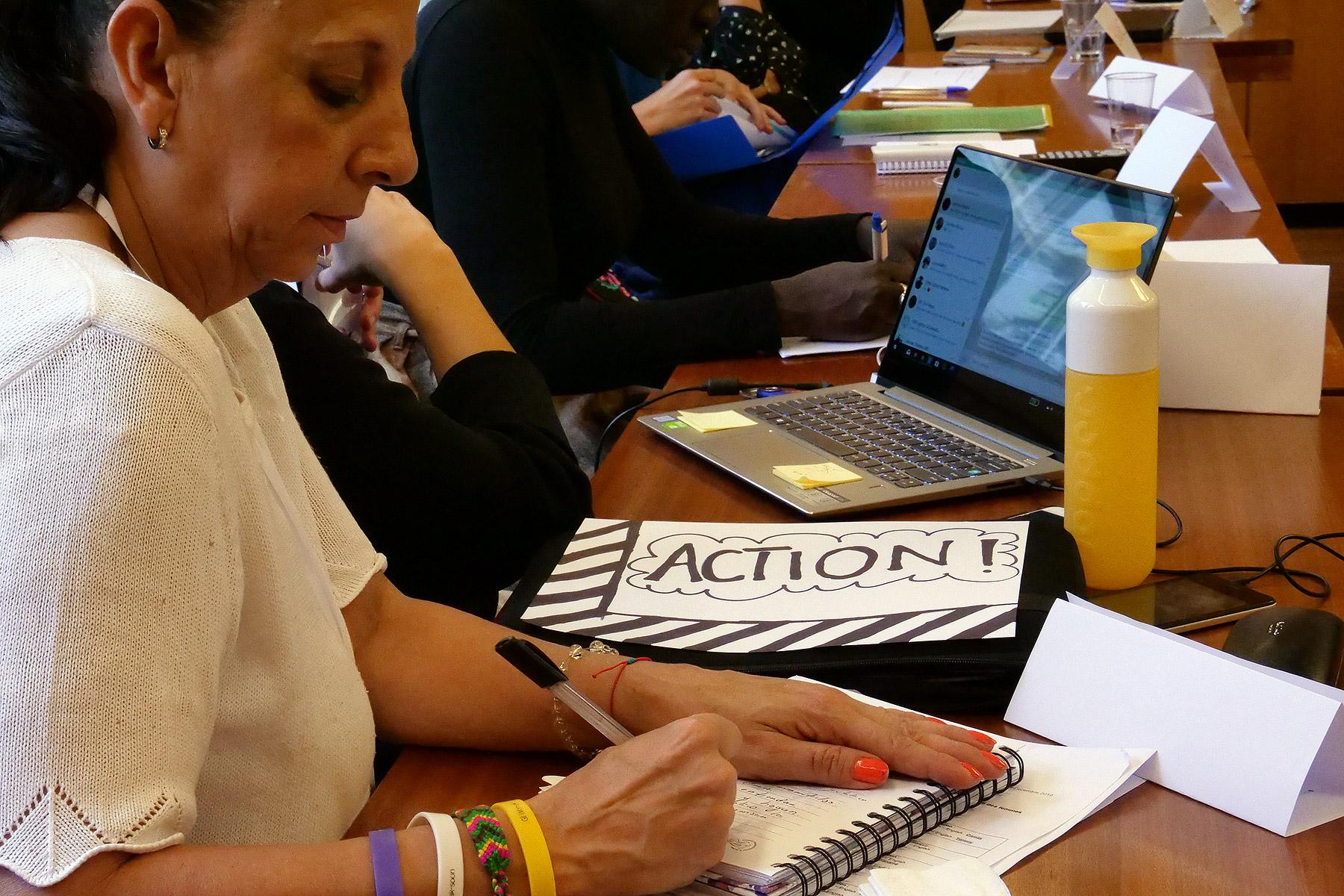 Survivors of sexual violence in conflict take part in a three-day training program in Geneva and call for action to end impunity, stigma and silence surrounding such crimes. Photo: LWF/L. Gillabert

(LWI) - SEMA is a Swahili word meaning ‘speak out’. It is also the name chosen by an international movement of survivors of rape and sexual violence in conflict, whose members are calling for justice and an end to the stigma surrounding such atrocities.

On 28 November, a group of women representing national SEMA networks in the Democratic Republic of Congo (DRC), South Sudan, Uganda, Burundi and Colombia brought their personal testimonies to a public event in Geneva University. They took part in a panel discussion following the screening of a film that was written, acted and directed by women and men survivors of rape in war-torn eastern DRC.

The event, part of a three-day training program for SEMA members, was supported by the Lutheran World Federation (LWF) and the Mukwege Foundation, set up by Nobel peace prize winner Dr Dennis Mukwege. The film depicts the many ways that survivors continue to suffer from the long-term effects of their devastating physical injuries, as well as psychological and emotional traumas, including loss of livelihoods and rejection by families and communities.

Tatiana, from a small village in eastern DRC, is coordinator of the survivor’s network in her country and one of the co-authors of the film script. She also has a part in the film, alongside one of her four children, a boy born as a result of the rape she endured. Despite having been so closely involved in the three-week production, tears flow every time she and her sisters watch the film.

“Making the film was a first step towards breaking the silence and stigma,” Tatiana says. “Many women and a few male survivors also took part in the production because men also suffer from sexual violence in Congo, she notes. “It’s important to support them because male survivors are more stigmatized, but they hide their anger and pain which is destroying our communities.”

Set up just two years ago, the DRC network now has over 3,300 members working in five of the worst affected provinces. The goal is to help all survivors find access to urgently needed physical and mental health care so that they can begin the difficult healing process. A few also find the courage to denounce their perpetrators but impunity and corruption is widespread.

Another problem, Tatiana explains, is that some victims are offered “amicable solutions” such as a few goats to stop them from seeking justice. “Sometimes families accept this because they have no faith in the justice system and they are frightened of the consequences,” she adds.

Angela, from Colombia, heads the survivor’s network in her country, helping to raise awareness and to give women back their dignity by developing leadership skills. Impunity is a major problem here too, she says, where rape cases are often treated with “unimaginable cynicism” and there is collusion between perpetrators and members of the legal system.

We need everyone to say that we are not responsible for what we’ve been through.

SEMA currently includes members from 21 countries, representing many different cultures, languages and religious traditions. “But we all share the same experience which we deal with every day in our bodies, our minds, our communities,” Angela says. “We need to break the stigma and we need all kinds of support, including physical, emotional and economic reparations. We need everyone to say that we are not responsible for what we’ve been through.”

Other survivors were less willing to talk openly about their work or their experiences, citing cases of family members who were threatened, harassed, even killed in an effort to stop the women speaking out. Some governments still do not recognize rape as a crime and weapon of war. “But we won’t have peace and reconciliation if we can’t talk about the truth in our countries,” one of them insisted.

The intergenerational effects of this scourge of sexual violence is another major concern for SEMA members. As well as seeking healing, justice and reparations for themselves, they want to break the cycle of violence by educating children so that “they understand in their DNA that violence is unacceptable and wrong.” They are urging people in all countries and in all walks of life is to become part of this prevention campaign by amplifying their message and supporting their work.

Despite the daily difficulties faced by survivors, the film deliberately ends on a more hopeful note, with a young boy telling his mother that when he grows up, he will be kind and helpful to her and to all women. Rather than focusing on past experiences, the message of these resilient and determined women is one of prevention to protect future generations from the atrocities they have endured.

SEMA is a global network of victims and survivors working to end rape and wartime sexual violence. It currently has members in Africa, Latin America, Europe and the Middle East.