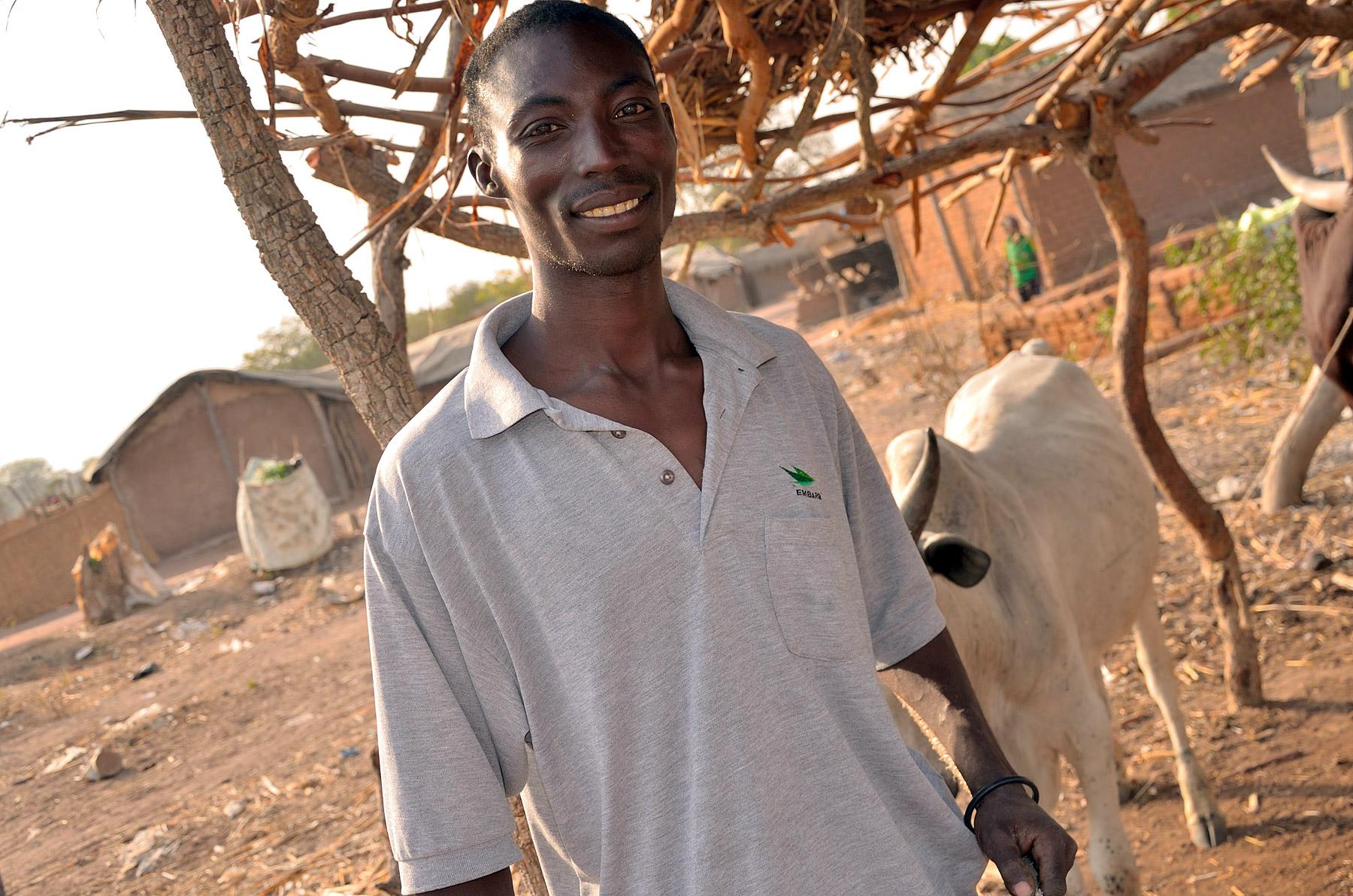 Loubandin Kim Copin made a life for himself and his family at Camp Dossiye, Chad. Photo: LWF/Thomas Ekelund

LWF providing a safe haven in the midst of conflict

(LWI) The field seems to stretch all the way to the horizon. In the midst of this dry semi–desert of red and dusty roads, a green haven unfolds. There are carrots, herbs, sesame and beans, all appearing even greener in the light of the setting sun. Men and women are bent over every plot, pulling out the weeds with skilled hands. And scattered over the field are streams and ponds. Everywhere the green cans marked with “FLM” can be seen, “Fédération luthérienne mondiale,” the French abbreviation for The Lutheran World Federation (LWF). This is Camp Dosseye in southern Chad.

Loubandin Kim Copin is tall, slim and dressed in a white t-shirt. He is not a man of many words, but his eyes and hands show compassion. When civil unrest came to the Central African Republic (CAR) and his village Pawa in 2003, he was a student. He and his wife had to flee the country along with most of their neighbors. Since then Camp Dosseye has been their home.

He and his wife Madjitenem Annette have seven children “and we are all doing okay”, Loubandin Kim says, smiling. Madjitenem, wearing a beautiful yellow sari, stands up from the boiling pan and swiftly gathers her children. It is time for the family photo.

“Thanks to LWF I have the animals, veterinarian care and fodder,” Loubandin says, proudly pointing to the small wall-less stable in front of the house. “We get seeds to grow different kind of vegetables, which gives us enough to eat and often to sell. But what is more important, I have been given the opportunity for personal development thanks to LWF,” he says. “And that is what´s going to feed me and my family in the future.”

Care for refugees and host communities

Life in a refugee camp is costly, Loubandin Kim says. He has to pay for school, water and the doctor. As he and his wife walk through the field, looking at their plants in the evening light, Loubandin Kim says that this is what he wants to do: “I’d like for me and my children to be able to finish school. That is so important. I need to know that my kids will have a different life, hopefully back in our country.”

LWF has been working in Chad since 2007. Dosseye has about 16,000 inhabitants and is one of three camps in Goré hosting mainly refugees from the CAR, who have been displaced by the political unrest in their country. In partnership with the United Nations High Commissioner for Refugees (UNHCR), LWF and ACT Alliance will be building shelters and infrastructure at the camp in the upcoming year, supporting the inhabitants in earning their livelihood, ensuring a safe environment and a secure food supply while providing vocational training for selected refugees and host communities at five centers.

“Working with host communities is as important as supporting the refugees,” says Jan Schutte, who is the LWF representative in Chad. “I guess that our holistic approach, our well known local staff and long experience have made LWF the most trusted partner to the UNHCR in Chad.”

Chad was already home to about 290,000 Sudanese refugees and 60,000 CAR refugees before the new arrivals. More than 20,000 new refugees from CAR were registered in Chad during 2013 and more are coming every day. Since 21 December 2013, more than 50,000 Chadians have been evacuated from CAR. A UN Emergency Response Plan has been prepared to assist up to 150,000 returnees and 50,000 new refugees over the next six months.

In discussions with refugee and local leaders, Schutte says that it has been determined that  the priorities for the coming year are disaster preparedness, continued support for host communities, agricultural support and income generation.

“But,” says Schutte, ”We need to be even more visible in relation to our funding partners. Since the LWF and ACT Alliance program became a major partner of UNHCR in Chad in 2013, UNHCR is also expecting a higher level of contribution from within the ACT Alliance. That is a challenge we have to stress.”

(With Contribution by Thomas Ekelund, Church of Sweden)