Allowing ourselves to be loved 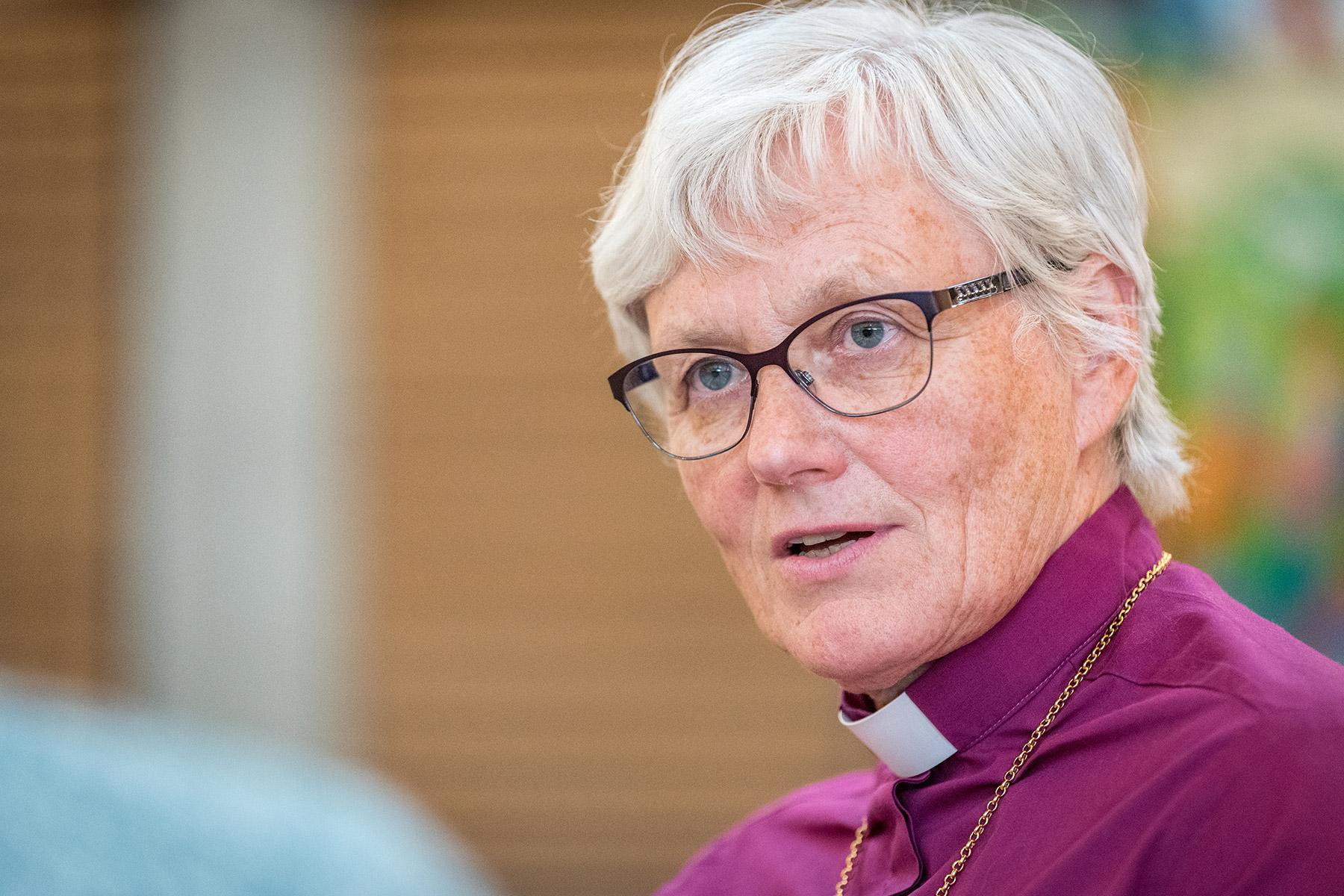 Rev. Dr Antje JackelÃ©n, Archbishop of the Church of Sweden and LWF Vice-President for the Nordic region. Photo: LWF/A.Hillert

by
Rev. Dr Antje Jackelén, Archbishop of the Church of Sweden and LWF Vice-President for the Nordic region.

A small and remarkable publication is currently celebrating its 500th anniversary: Martin Luther’s treatise on the freedom of a Christian. It was produced in the space of merely a few weeks and published in German on 4 November 1520 and in Latin later that month. Its historical effect can hardly be overstated. Five centuries later, its thoughts on the connection between freedom and love remain relevant.

Naturally, there is no straight line from Luther’s “On the Freedom of a Christian” to today’s freedom of expression, freedom of religion and freedom of belief. He wrote before the Age of Enlightenment and before the throne and the altar parted ways. Nevertheless, this little treatise’s passionate profession of a freedom that goes hand in hand with a binding social responsibility remains relevant. In his accompanying letter to the then Pope Leo X, the writer himself says, “It is a small book if you regard its size. Unless I am mistaken, however, it contains the whole of Christian life in a brief form, provided you grasp its meaning.”

At the time when his book was published, Luther’s own freedom was threatened by the lawlessness in which he would soon find himself due to a papal bull of excommunication. Today’s attacks on freedom have a completely different guise, but are just as concrete: surveillance capitalism, conspiracy theories, distorted information that becomes a patchwork of lies, freedom of expression that is abused for persecution and hate or limited by political powers, and limitations of democratic rights in the wake of the pandemic.

How can “the freedom of a Christian” help?

How can “the freedom of a Christian” help?

Luther says that a person who has had a taste of faith, even if only a little, knows what a life-giving force it is, not least in stressful situations. To explain this as succinctly as possible, he starts his treatise with two seemingly opposite principles: “A Christian is a perfectly free lord of all, subject to none. A Christian is a perfectly dutiful servant of all, subject to all.”

Faith is first and foremost an experience of freedom! The principal concept of the Reformation is, of course, that love cannot be earned through good works. God’s benevolence can only be received for free, as a gift of grace. Allowing yourself to be loved is not always the easiest thing for us humans to do, but faced with the source of life itself, it is despite everything the only suitable approach: to allow yourself to be loved, to enjoy what is true, good and beautiful – what we have named God. Faith is having trust and confidence in what is always bigger than we can feel and think, in God, who is love. Freedom does not commence with belief in the truth of certain statements or with an obscure feeling, but with a trust that thrives in the light of day. Expressed in the language of the Reformation: a person who is made righteous by grace through faith and builds on this is truly a free person.

Where the three major questions – is there meaning, am I good enough, am I loved – have been answered with a divine “yes”, we can relax in terms of our struggle to achieve. If you no longer expend your energy on saving yourself, you have much greater freedom to meet the needs of other people. You become freed from something, and simultaneously free for something. In the freedom of faith, our scope grows for hearing the call of others, taking responsibility and contributing to the common good.

In practical life, this is obviously not always as crystal clear. Time after time, we lose this fundamental freedom and find ourselves bogged down in bonds, sometimes very unhealthy ones. Luther explains this by stating that a person’s inner and outer are fighting each other. The inner and the outer are two aspects of a person that form a whole. In other words, body and soul do not oppose each other, and the body does not represent the bad aspects of a person. It is not about disdain for the body. Rather, it is about the struggle between on the one hand the trust of faith that liberates, and on the other the external striving for acceptance. This striving is misdirected, because it wants to gain something forcibly that can only be received as a gift. Where freedom is real, we have access to a spiritual force that also prevails in times of corporal oppression. “This is a splendid privilege,” says Luther, “a spiritual dominion in which there is nothing so good and nothing so evil but that it shall work together for good to me, if only I believe /.../ Lo, this is the inestimable power and liberty of Christians.”

The foundation of Christian freedom is in our relation to Jesus Christ as both a human being and God. Jesus lived as a human being, but in perfect freedom. Through his death and resurrection, he is the actual guarantor of freedom. Luther often writes in a disarmingly down-to-earth manner. But here, he speaks in mystical language. He speaks of the blessed exchange and how, through faith, Christ and the soul celebrate marriage. Christ shoulders all burdens, and the soul gains full freedom. With the love poetry of the Song of Solomon, he puts the inner life of faith into words: “My beloved is mine and I am his” (Song of Solomon 2:16).

Life should be lived in the here and now. Here, we are to spend time with people and to take responsibility for family, work, society and the world.

However, it soon becomes extremely practical again. The passionate delight at the union with the truest, the most good and the most beautiful, is immediately brought down to earth by the varied conditions of everyday life. Life should be lived in the here and now. Here, we are to spend time with people and to take responsibility for family, work, society and the world.

This is best done when the outer person is shaped in accordance with the internal one, according to the motto, a “good tree bears good fruit”. Freedom expresses itself in love for our fellow humans. A person who is free through faith is also free to commit themselves in love: “Behold, from faith thus flow forth love and joy in the Lord, and from love a joyful, willing, and free mind that serves one’s neighbor willingly ...” Love and joy flow from faith! In freedom we receive, in love we give to other people according to their needs.

Freedom changes people’s will and attitude. To a person who is free, fellow human beings cease to be a means of self-affirmation. Instead, a genuine interest in their wellbeing grows. Where love rules, the other person’s freedom of conscience is safeguarded, irrespective of which faith community he or she belongs to. Anyone wanting to live in a Christian’s freedom must also safeguard other people’s freedom, regardless of whether they are Christian or not.

The conclusion is that a Christian does not live isolated in their own ego, but in Christ and in their neighbor: in Christ through faith and in their neighbor through love. Through faith, they ascend to God, and through love they rapidly return to the ‘factory floor’ of everyday life – and precisely so always remain in the divine love. Luther says that this is a spiritual and true freedom; it is more excellent than all other liberty, just as clearly as heaven outshines earth.

No, Luther himself did not always live up to this freedom – neither when he turned against the rebelling peasants nor when he incited hatred and violence towards Jews. Yet, the union of the freedom of faith and the responsibility of love has been both powerful and transformational for society.

Of course, Luther was no democrat, and the Reformation was no democracy movement. Yet, the emphasis on the freedom and responsibility of every person has been important in the emergence of modern democracy and human rights.

Sunday as a day of freedom signals human dignity; it expresses the dignity of a human as a free and loving being.

Sundays and public holidays are reminders of the fundamental significance of freedom. Sunday is a day of freedom safeguarding the fact that we are more than what we achieve through our work and more than we can buy and sell. It is a day of freedom for the purpose of nurturing the basic relationships that make up our life: with ourselves, with others, with the Creation and with the foundation of existence itself, which we generally call God. Sunday as a day of freedom signals human dignity; it expresses the dignity of a human as a free and loving being.

The oppressive system that prevailed in the GDR included attempts to instrumentalize the church. Christian freedom was a threat. Nevertheless, it was churches in particular that became oases for freedom. Places where you could take a step outside the system and claim space for reflection, meditation and prayer, but also for tough discussions. The freedom of a Christian expressed itself in safeguarding the freedom of conscience and revealing false force. Thus, it became a crucial condition for the downfall of the regime.

When the level of public debate sinks to scandalization of individuals, when fundamental moral issues are treated through polarization, when judgement and character are replaced by rules and policies, when citizens are reduced to customers and consumers, when vital political discussions end up in the shadow of constant popularity surveys ... – that’s when it becomes important to re-highlight the foundations of freedom and the social responsibility that is the fruit of freedom. This freedom is not just an internal attitude that affects an individual’s life. It also encompasses a radical social utopia, because it requires that the people who govern view and exercise their power as a service for those they are appointed to govern: they are free to serve.

Freedom is not realty or property; its power is often concealed by its opposite. “Who am I?” is the name of a poem by Dietrich Bonhoeffer, theologian and participant in the resistance movement who was executed by the Nazis shortly before the end of World War II. He wrote the poem during his time in prison. It starts with a few lines about how a Christian’s freedom overcomes external imprisonment:

Who am I? They often tell me I stepped from my cell’s confinement calmly, cheerfully, firmly, like a squire from his country house.

Who am I? They often tell me that I talk to my guards freely and friendly and clearly, as though it were mine to command.

A few stanzas then follow that are imbued with self-assessment. Am I really that which others tell of? Bonhoeffer gives an unembellished voice to the longing, anger, fear and resignation that he also feels. His impotent concern for family and friends, his emptiness and lack of strength. His external crisis corresponds to the self-doubt of his internal crisis. Am I really who I seem to be? Am I like this today but different tomorrow? Am I both, am I free and not free, good and evil? The resolution is presented in the last lines of the poem. There, he returns to the actual foundation of the freedom that impressed his prison guards: trust, faith.

He remained loyal to freedom, despite being imprisoned and executed. Most of us live our lives in far less extreme circumstances. However, threats to freedom exist. Even today there is every reason to remind ourselves how spiritual freedom and concrete social responsibility are linked.

“Let these trees grow as our communion is growing”
blog