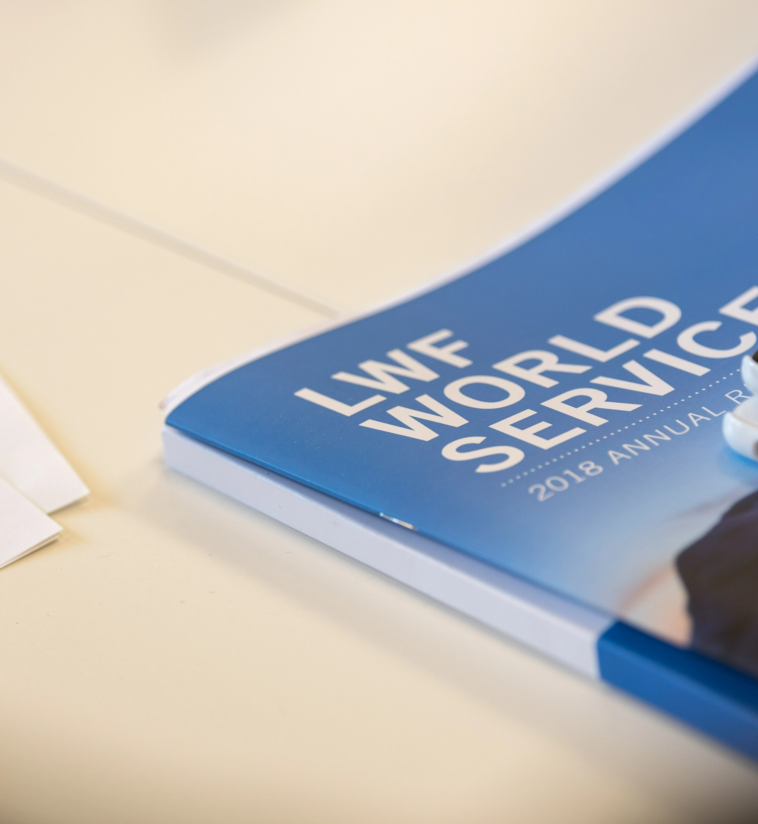 Bishop Henrik Stubkjaer is Bishop of Viborg of the Evangelical Lutheran Church in Denmark (since 2014), and Chairman of the National Council of Churches in Denmark. He was elected into the LWF Council in 2017.

From 2005-2014, Stubkjaer served as General Secretary of DanChurchAid, Denmark. Since 2010, he has been Board member of the ACT Alliance, and Chair in ACT EU (APRODEV).

Bishop Stubkjaer was elected into the LWF Council in 2017.

Prior to joining CLWR, Achtelstetter was General Secretary of the World Association for Christian Communication (WACC) since (2010-2018), and Director and Editor-in-Chief of the LWF in Geneva, Switzerland from 2002-2010. She previously worked as the coordinator of the Public Information Team & Media Relations Officer of the World Council of Churches (WCC) in Geneva. Achtelstetter was ordained to the Evangelical Lutheran Church in Bavaria (Germany), an LWF member church.

Ms Davies has been Executive Director of Australian Lutheran World Service (ALWS) since 2018. ALWS is the overseas aid and resettlement agency of the Lutheran Church of Australia.

Ms Davies began her career working for the US-based Catholic Relief Services, where she gained more than 20 years of international relief and development experience in Africa, Central America and Southeast Asia. Her most recent position has been Head of International Programs with Caritas Australia, the Australian Catholic agency for international aid and development.

Dr. Rebecca Duerst serves as Director for Diakonia with the Global Mission unit of the Evangelical Lutheran Church in America (ELCA). ELCA is a member church of the LWF.

In this position, she leads the team that accompanies global companion churches and organizations in their relief and development work. Dr. Duerst holds a B.A. in Art, Biology, and Chemistry, a Ph.D. in Microbiology and Immunology, a M.A. in Education, and a M.P.H. in Global Health. Prior to joining the ELCA in her current position, she served with ELCA Global Mission as program director for global health and as a missionary in Namibia, as well as worked in academic research related to infectious disease and community-based primary healthcare.

Rev Dr Nestor Friedrich is President of the Evangelical Church of the Lutheran Confession in Brazil.

Rev Friedrich was elected into the LWF Council in 2017.

Lennart Hernander is International Program Director of ACT Church of Sweden, a related agency of LWF World Service and an LWF member church.

He is an Economist with 30 years of experience in development aid and humanitarian work. 17 of those living and working in East Africa; Tanzania (7.5 years), Uganda (2,5) and Kenya (7). Since 2009 he has been working as Country Representative with LWF World Service, first in Uganda (2009-2011) and then in Kenya, Djibouti and Somalia (2011-2018). 2018-2019 he was the Compliance and Accountability Manager with LWF HQ in Geneva, and partially on loan as acting Representative at LWF in Jerusalem.

Tomi Järvinen is the Director of International Cooperation and Strategy and Program Development at Finn Church Aid (FCA). Järvinen has made a long career in different development cooperation organizations serving in senior management positions for more than 20 years. His has done research on empowerment and measuring impact. He has lectured in a wide variety of universities and educational institutions.

FCA is one of the largest Finnish providers of development cooperation and emergency assistance.

Bshop Dr H.c. Frank O. July has been bishop of the Evangelical Lutheran Church in Wuerttemberg since 2005. From 2010-2017, he was the LWF Vice president for the Central Western European region.

Bishop July was elected into the LWF Council in 2010.

Mr Martin Kessler has been director of Diakonie Katastrophenhilfe (DKH), Germany, since 2011. DKH provides humanitarian aid worldwide and is part of the Evangelisches Werk für Diakonie und Entwicklung e. V., the Social Service Agency of the German Protestant Church – one of the biggest welfare institutions in Germany, with its headquarter in Berlin.

In the Committee, he also represents Bread for the World (Brot für die Welt).

Milos Klatik is bishop of the Evangelical Church of the Augsburg Confession (ECAC) in the Slovak Republic. Bishop Klatik was elected into the LWF council in 2017.

Veikko Munyika has been bishop for the Western Diocese of the Evangelical Lutheran Church in Namibia since 2013.

Bishop Munyika was elected into the LWF Council in 2017.

Jonas Vejsager Nøddekær has an educational background in Political Science and has extensive senior management experience from previous position in DCA. He has, amongst others, been Development Director as well as Head of the Programme, Policy and Advocacy at the DCA Headquarter in Copenhagen. He has furthermore worked eight years abroad as DCA’s Country Representative in Ethiopia, Cambodia and Myanmar.

Lastly, he has several years of board experience from various organisations including the Danish Ethical Trade Initiative and the Danish Institute for International Studies.

DCA is an independent church aid agency based in Copenhagen, Denmark and provides emergency relief in disaster-stricken areas and long-term development assistance in poor regions of the world.

Mr Lasse Schmidt-Klie works as a research assistant for a member of parliament in Berlin, Germany. He belongs to the Evangelical Lutheran Church of Hannover.

Mr Schmidt-Klie was elected into the LWF Council in 2017.

Ms Desri Maria Sumbayak is an English lecturer at the faculty of Teacher's Training and Education in a State University in Pekanbaru, Indonesia. She belongs to the Indonesian Christian Church (Huria Kristen Indonesia, HKI), working as advisor for the women's fellowship at the church.

Ms Sumbayak was elected into the LWF Council in 2017.

Ms Faith Mwikali Wambua is a graduate of Communication and Geography & Environmental Studies, pursuing a Masters in Environmental Planning and Management in the University of Nairobi. She belongs to the Kenya Evangelical Lutheran Church. She also holds a certificate course in guidance and counseling offered by the National Youth Guidance and Counseling Association in the UON Chapter.

Ms Wambua was elected into the LWF Council in 2017.