Vital role of faith in refugee protection and integration 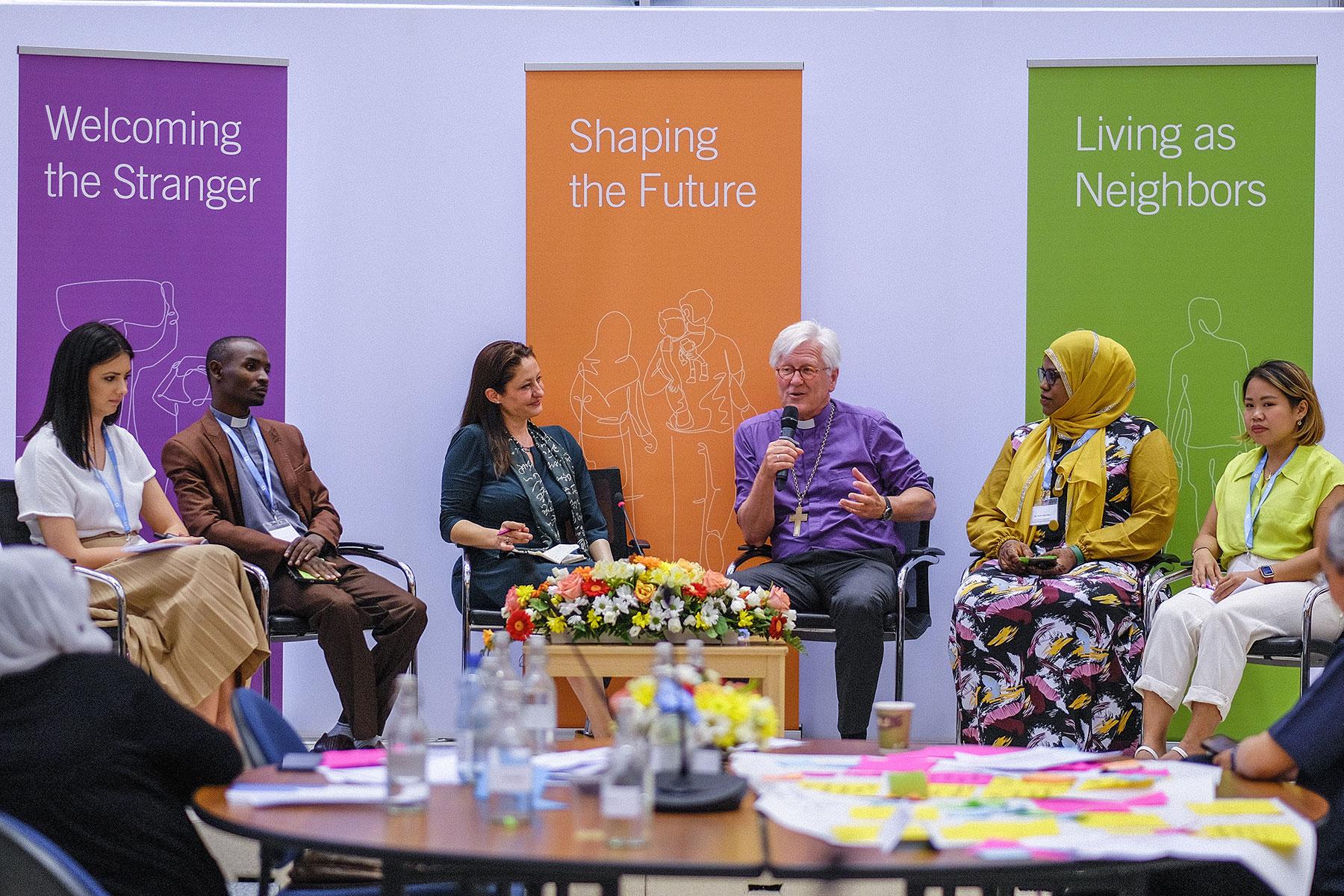 (LWI) - Each woman, man or child fleeing from war or natural disasters, persecution or extreme poverty has a face, a name, a story and a family left behind. Listening to those stories, offering protection and support to forcibly displaced people is an obligation of all major religious traditions and there is much more that faith-based organizations can do, in partnership with governments and international agencies, to respond to the world’s growing refugee crisis.

That was the message from members of different faith traditions working in local and global refugee responses who took part in an international conference from 20 to 21 June on exploring opportunities for increased cooperation. Entitled ‘Welcoming the Stranger, Shaping the Future’, the interfaith event brought together over 80 religious leaders, national and local activists and humanitarian workers from 37 countries, alongside officials from the United Nations refugee agency (UNHCR).

Organized by The Lutheran World Federation (LWF) in partnership with Islamic Relief Worldwide (IRW) and HIAS, the Jewish refugee aid organization, the Geneva conference concluded with a message of hope, as well as an appeal to international agencies to understand the vital role that faith plays in trauma healing, resilience-building and integration of refugees into their new host communities.

German Bishop Heinrich Bedford-Strohm of the Evangelical Lutheran Church in Bavaria and former chair of the Council of the Evangelical Church in Germany (EKD), reflected on the words of the Hebrew Bible which stress that the duty to protect immigrants and refugees derives from the experience of the people of Israel who ‘were strangers in the land of Egypt’. “This is not an imposed law but something that comes from the heart, from knowing how it feels to be looking for a safe harbor,” he said. 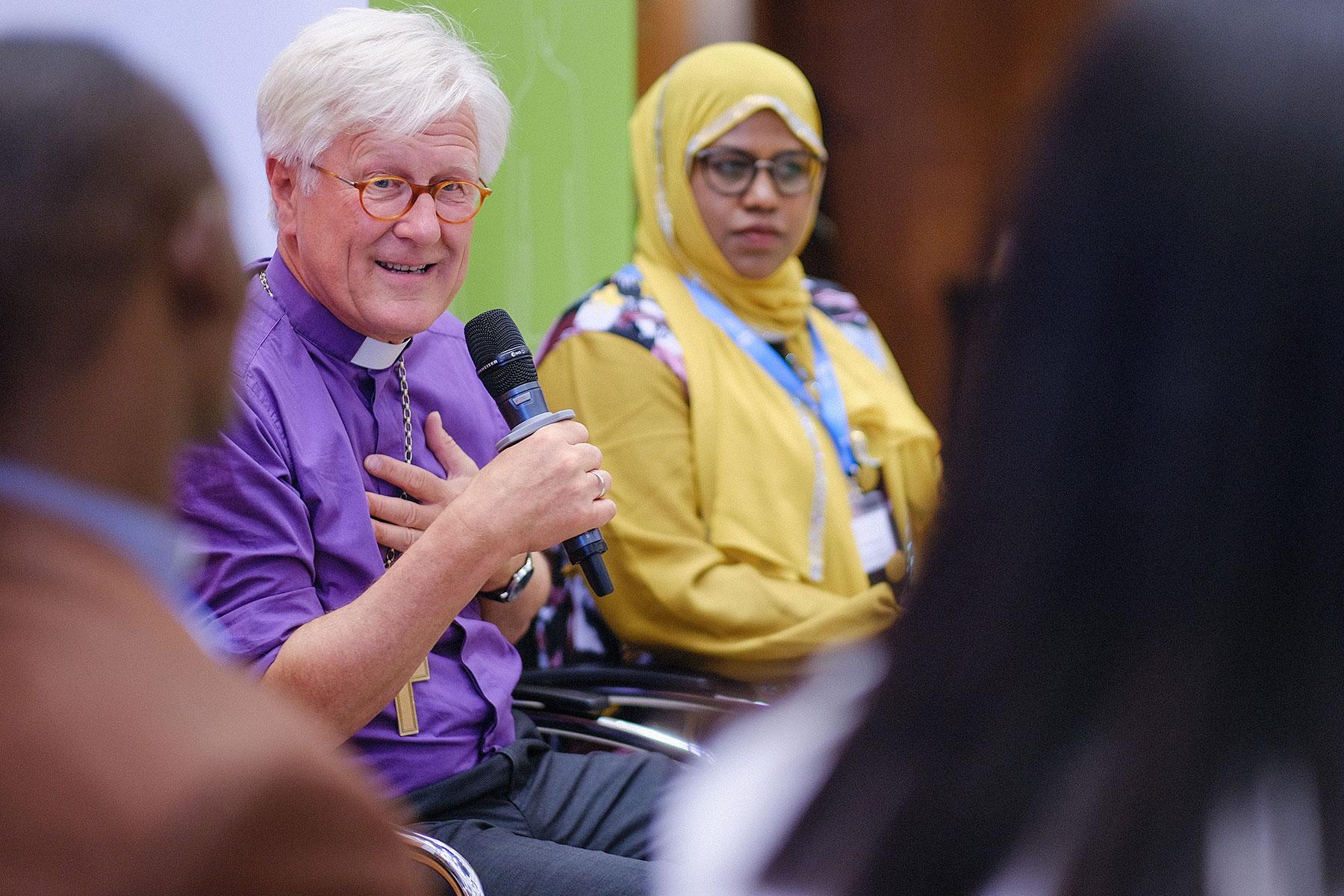 “As a Christian,” he continued, “I am part of that Jewish narrative and I live in that story. Seeing the world through the eyes of another is a basic requirement for religious people and praying to God is not possible without also looking at your neighbor.” He recalled a memorial service that he and Catholic Cardinal Reinhard Marx held in a packed Munich Cathedral in 2019, reading out the names of hundreds of people who died crossing the Mediterranean Sea in search of safety and a dignified life.

Bedford-Strohm was part of a panel discussion, moderated by Senior UNHCR Advisor Safak Pavey, with four young women and men who work to support refugees and asylum seekers in Kenya, Uganda, Malaysia and Serbia. Like the bishop, several of them have received death threats or been targeted because of their advocacy for the rights of these minority communities.

Heidy Quah, founder and director of ‘Refuge for the Refugees’ in Malaysia has been detained and taken to court for her public denunciation of the government’s ill treatment of refugees during the COVID-19 pandemic. Rev. Moses Atuhaire, who heads a network of faith-based organizations in Western Uganda, told how his office was attacked after he spoke on the radio about local government corruption and injustice in its treatment of minorities. Jelena Djurdjevič, coordinator for Jesuit Refugee Services in Serbia, spoke of the discrimination she faces because of her work, but also the rewards of seeing individuals resettled and building new lives for themselves.

Farida Abdulbasit, Program Coordinator for the Kenya Muslim Youth Alliance, shared the story of one refugee she met, a young Kenyan woman forced to marry a member of the Somalia based Al-Shabaab militant group. “When her husband was killed, she found her way back to Kenya with her four kids, traumatized by her experience, but every counselor we spoke to was afraid as she was a security nightmare,” Abdulbasit said.

“We get used to problems with the police, but you have to live knowing that someone is watching you,” she added. Yet for Abdulbasit too, the rewards of securing psychosocial support and a small loan for that woman to start her own business were more than enough motivation to continue with this challenging work. 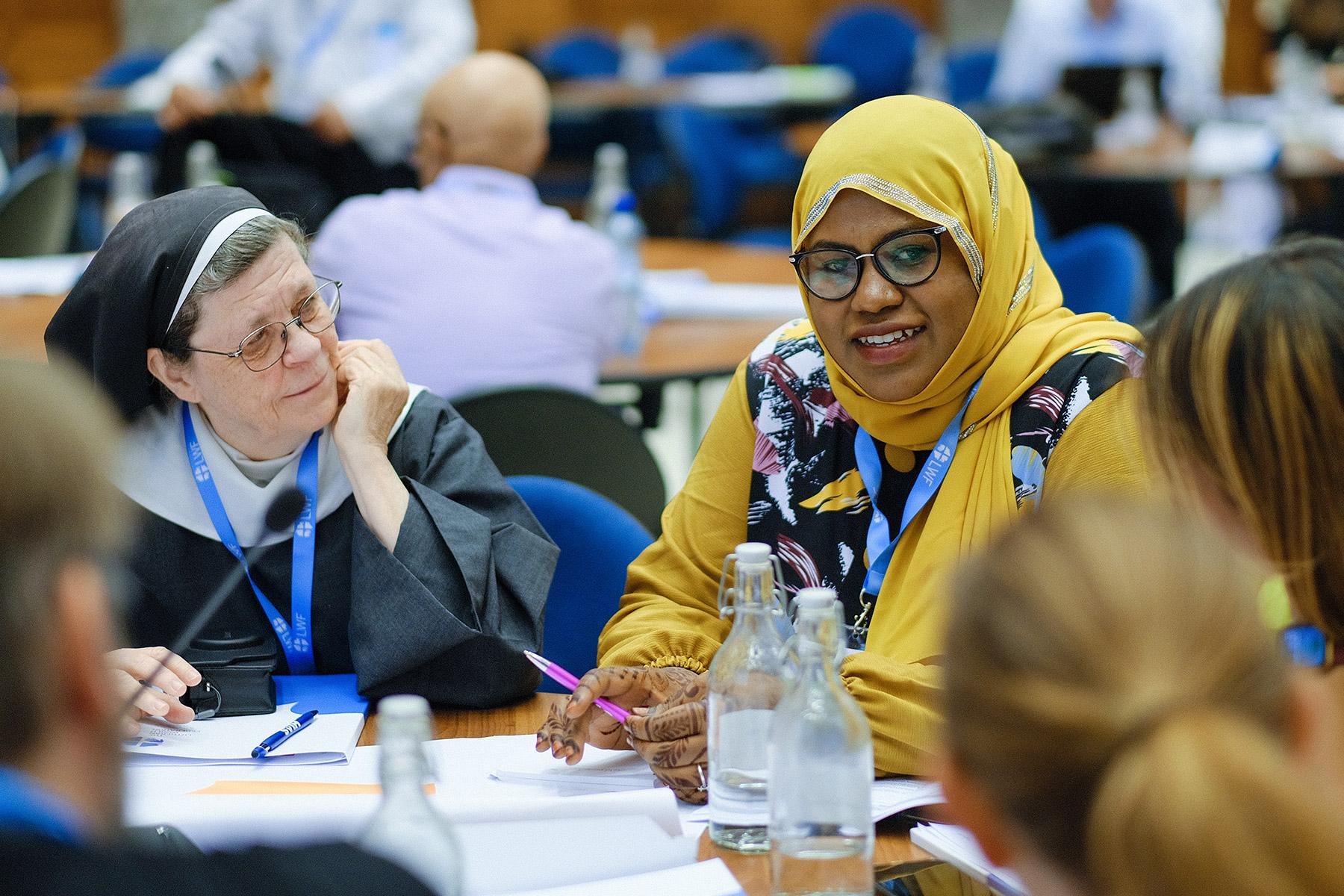 Participants highlighted the importance of “bold, targeted, collaborative, innovative and evidence-based" advocacy for refugee rights. They noted the importance of formation for faith leaders who can have a huge influence in shaping popular opinion around issues of immigration and integration. UN officials and faith actors agreed on the need for closer cooperation “to understand each other’s language” and to ensure that inclusion of a faith perspective goes beyond planning to grassroots implementation.

The specific needs of children and the impact of gender-based violence on migrants and refugees were key areas where participants called for closer coordination between different faith communities and with secular organizations to share knowledge and experience of prevention, protection and healing practices. “In our group discussion we talked about developing tool kits, denouncing harmful practices, creating safe spaces for women and girls, as well as engaging men and boys in the search for durable solutions,” said LWF Gender Advocacy Officer Sikhonzile Ndlovu. 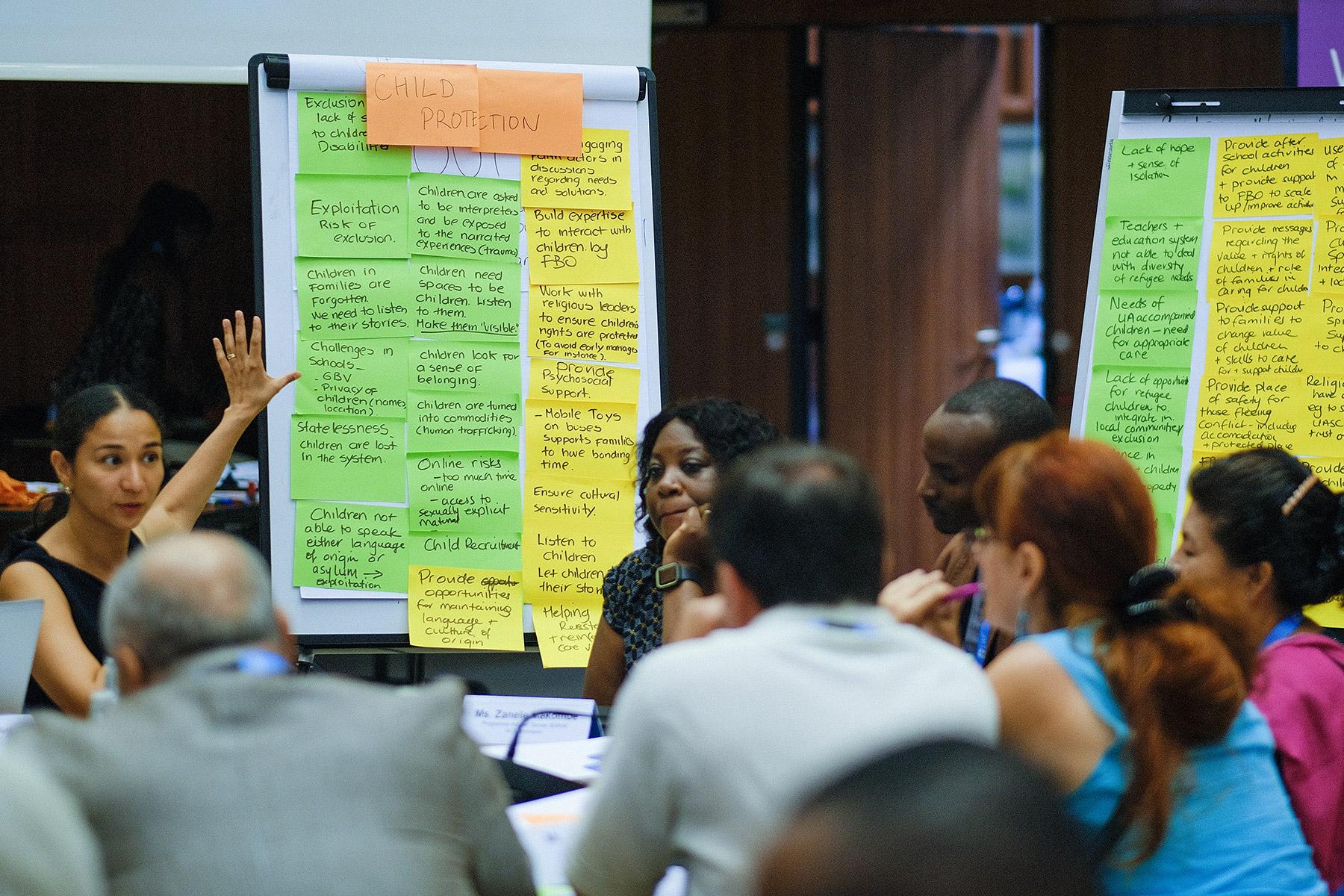 Faith actors can play a vital role in tackling xenophobia and promoting peaceful coexistence, participants said, insisting that this “is a long-term project that cannot be achieved in emergency situations.” Creating “spaces of encounter through the use of art, music, food or sports,” can be effective tools for breaking down fear and ignorance that fuel hostility towards immigrants, said Kate Wiggans, IRW’s representative to the UN in Geneva. Similarly, equipping immigrants with knowledge of local customs is important for their integration into host communities.

Religious language, symbols and rituals can also be an important part of trauma healing processes, the conference heard. Psychosocial support for refugees is essential for humanitarian program delivery, participants said, pointing to the need for networks to enhance cooperation and greater faith literacy within both secular and religious organizations. They also noted the need to identify secondary trauma and burnout of those providing pastoral care, particularly among men “who may often be neglected in mental health care.”

In identifying sustainable solutions to the challenges faced by faith-based groups in different parts of the globe, participants insisted on the importance of “allowing refugees themselves to be protagonists of this work.” Paula Mazzini Mendes, regional coordinator of the National Council of Christian Churches in Brazil noted that “what people want is not always what we want to give, so it is vital to ask them first.”

Reflecting on the negative narratives around Venezuelan refugees in her country, she said “we must always listen to both sides of the story” to avoid stereotyping and blame.” Thirdly, she said, “as religious communities, let us not limit our faith to liturgies, but find new ways of worshipping by providing food for the hungry.” “Faith matters to the people we are working with, allowing them to survive and to thrive” said HIAS CEO, Mark Hetfield, “so we have to stop pretending that faith doesn’t matter.” Our commitment is to make sure that we use faith as a force for good.”

A World of Neighbours offers vision of welcoming society
news

Welcoming the stranger through faith and community
news