From the underground to the middle of society 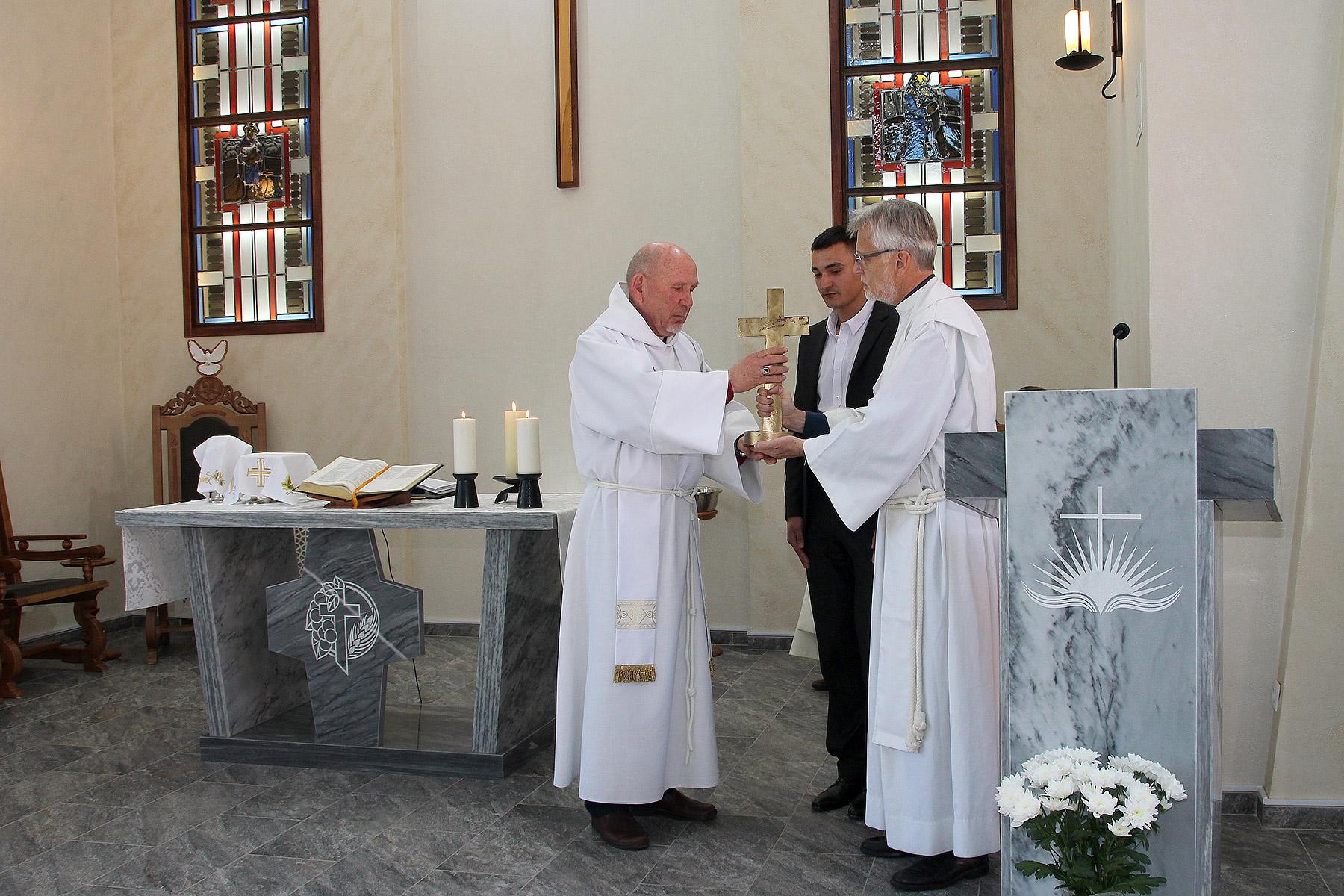 A symbol of peace: During a service in the Church of Christ the Redeemer in Nur-Sultan, Kazakhstan, LWF General Secretary Martin Junge presents a Liberian cross to ELCRK Archbishop Yuri Novgorodov. Photo: LWF/A. WeyermÃ¼ller

(LWI) - "The core message of our faith is a message of peace," said Rev. Dr Martin Junge, General Secretary of the Lutheran World Federation (LWF), during his visit to the Evangelical Lutheran Church in the Republic of Kazakhstan (ELCRK). He offered this message in a sermon at the Church of Christ the Redeemer in Nur-Sultan. The service was also attended by the ambassadors of Germany, Finland, Sweden and the USA.

Based on the sermon text taken from John 20:19-29, Junge emphasized the triple "Peace be with you" of the Risen One to the frightened disciples running through the text. Christ speaks words of hope, love and peace to those who have retreated from fear and terror "which they cannot say to themselves".

Christ speaks words of hope, love and peace to those who have retreated from fear and terror.

Holding on to the "message of peace given in Christ and through Christ" gives believers the courage to approach others and to "take responsibility for a peaceful coexistence", said Junge. He went on to express his joy about the agreement signed on 13 May by the ELCRK, the Roman Catholic Church and the Russian Orthodox Church. It is an encouraging sign for ecumenical cooperation in Kazakhstan and a strengthening of the voice of the minority churches in the country which also have a common painful history of persecution.

Junge then referred to the Lutheran-Catholic dialogue of the LWF, one outcome of which is the document "From Conflict to Communion", in which the pains inflicted on one another during a 500-year history since the Reformation were addressed. The Joint Commemoration of the Reformation in in Lund 2016 had been a significant further step on this path.

In Kazakhstan, the question of living together peacefully was a main concern at the Congress of Leaders of World and Traditional Religions, Junge underlined. The LWF had been involved in this event from the beginning, with Archbishop Yuri Novgorodov taking part in the Congress Secretariat as a representative of the LWF.

In his sermon, Junge also emphasized the role of disciple Thomas, wondering whether he really was as unbelieving as it is said in the Christian tradition – he does not hide away as the others do, but moves outside in public. Also, his question to the Risen One strikes a crucial point: Thomas did not ask for a miracle, but to lay his hands into the wounds of the Crucified. Even today, the wounds of Christ proof that God has become human and that God has paid a high price for his love of humankind, said Junge.

As a sign of international solidarity and proof "that God can make peace out of the worst conflict," the LWF General Secretary presented the Archbishop with a so-called Liberian cross, made out of bullet casings from the country’s bloody conflict.

LWF General Secretary Rev. Dr Martin Junge visited Kazakhstan from 15-21 May 2019 to meet with the LWF member church and local leaders in the country.

The ELCRK is part of the Federation of Evangelical Lutheran Churches in Russia and Other States (ELKRAS) which has been a member of the LWF since 1989.