Transforming the World through Education 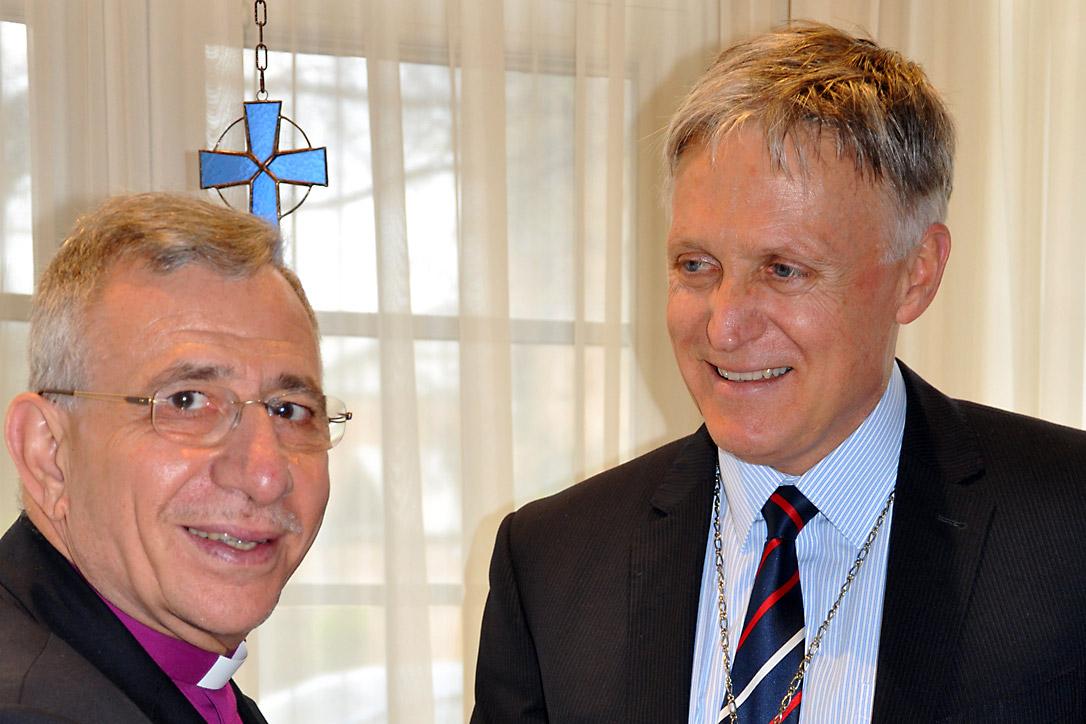 BRISBANE, Australia/GENEVA, 2 October 2013 (LWI) - Bishop Dr Munib A. Younan, President of The Lutheran World Federation (LWF), has told Lutheran educators from across Australia that education can act as an instrument for peace and understanding among diverse communities.

“Education gives us the tools to transform the world,” Younan told 1,000 delegates at the Australian Conference on Lutheran Education (ACLE) on 30 September in Brisbane.

In his keynote address, “The Truth Shall Set You Free: The Transformative Power of Education in the Middle East,” Younan, head of the Evangelical Lutheran Church in Jordan and the Holy Land (ELCJHL), praised the Lutheran Church of Australia (LCA) for its witness through education.

“Education is more than learning sums or proper grammar. Education is the light casting out the darkness; it is love casting out fear; it is strength casting out weakness,” the LWF president emphasized. “We are shaping young minds for a future where peaceful coexistence is possible and human dignity is upheld,” he added.

“Wise Up! Transforming Mind, Body and Heart in Lutheran Education,” was the theme of the 30 September – 2 October ACLE conference, held every four years. The gathering brings together educators from across Australia’s Lutheran schools.

Speaking about the goal of ELCJHL’s schools and educational programs, Younan emphasized that the system is vital as it teaches the Evangelical ethos in a Palestinian context. This includes molding a Palestinian, Christian and Lutheran identity among the youth, and teaching them to live with people of other faiths, especially Islam and Judaism.

“Our evangelical mission is to convert our students from extremism to moderation in a Middle East that is drowning in extremism,” he said of the four ELCJHL schools that serve 3,000 students drawn from both the Christian and Muslim communities.

In the schools, students learn that mutual regard and respect for others is a foundation of peaceful existence, something that gives Middle East communities hope, Younan added.

The Palestinian bishop said that many in the Middle East have given up hope for peace and can only see a future with violence and vengeance. The ELCJHL’s schools offer a different path. “Through education and dialogue, we transmute cultures of fear into cultures of hope and compassion.”

Younan, who was recently awarded the Al-Hussein Decoration for Distinguished Service from the King of Jordan for promoting peace among Christians and Muslims in the Middle East, said transformative education and interfaith dialogue are needed to combat the extremism that is found in Christianity, Judaism and Islam.

The LWF president noted that while Muslims comprise around two percent of the Australian population, they bring a richness of culture and tradition from over 65 different countries. He challenged the Australian Lutheran educators and other Christians to use “the transforming power of education and the gospel of hope” to nurture acceptance of the country’s new neighbors.

The LCA, which includes the Lutheran Church of New Zealand, has 60,000 members in 648 congregations. It is known for its education programs and diversity, with 7,000 members coming from indigenous communities.

Teaching a culture of peace and relationship restoration are key parts of the Lutheran education system, which teaches more than 38,000 students across Australia. In Queensland alone Lutheran schools employ 2,630 staff.

“Our schools have always been singled out for excellent pastoral care—the way we help grow the student’s whole being and their soul,” said Sue Kloeden, director of Lutheran Education in Queensland.

In his address, Younan invited the ACLE to begin a conversation around developing a deeper partnership between the Lutheran schools and colleges in Australia and the ELCJHL schools. “By sharing resources, skills and technologies, we can enrich the lives of our students and teachers,” he said.

In a 29 September sermon at St Peter’s College in Brisbane, the LWF president underscored the church’s role in bringing peace and understanding to diverse communities in the Middle East.

“Because of faith, Palestinian Christians are instruments of peace, brokers of justice, ministers of reconciliation, and promoters of human rights, including women’s rights. Because of faith we are initiators of dialogues with others and apostles of love,” Younan stressed.

(Caryn Rogers from the LCA contributed to this article.)