Relief for Tigray despite renewed fighting

Renewed hostilities in Ethiopia’s Tigray region and neighboring provinces have closed the humanitarian corridor established after a truce 5 months ago. As the security situation worsens, LWF staff continue to provide aid from the province capital, Mekelle. 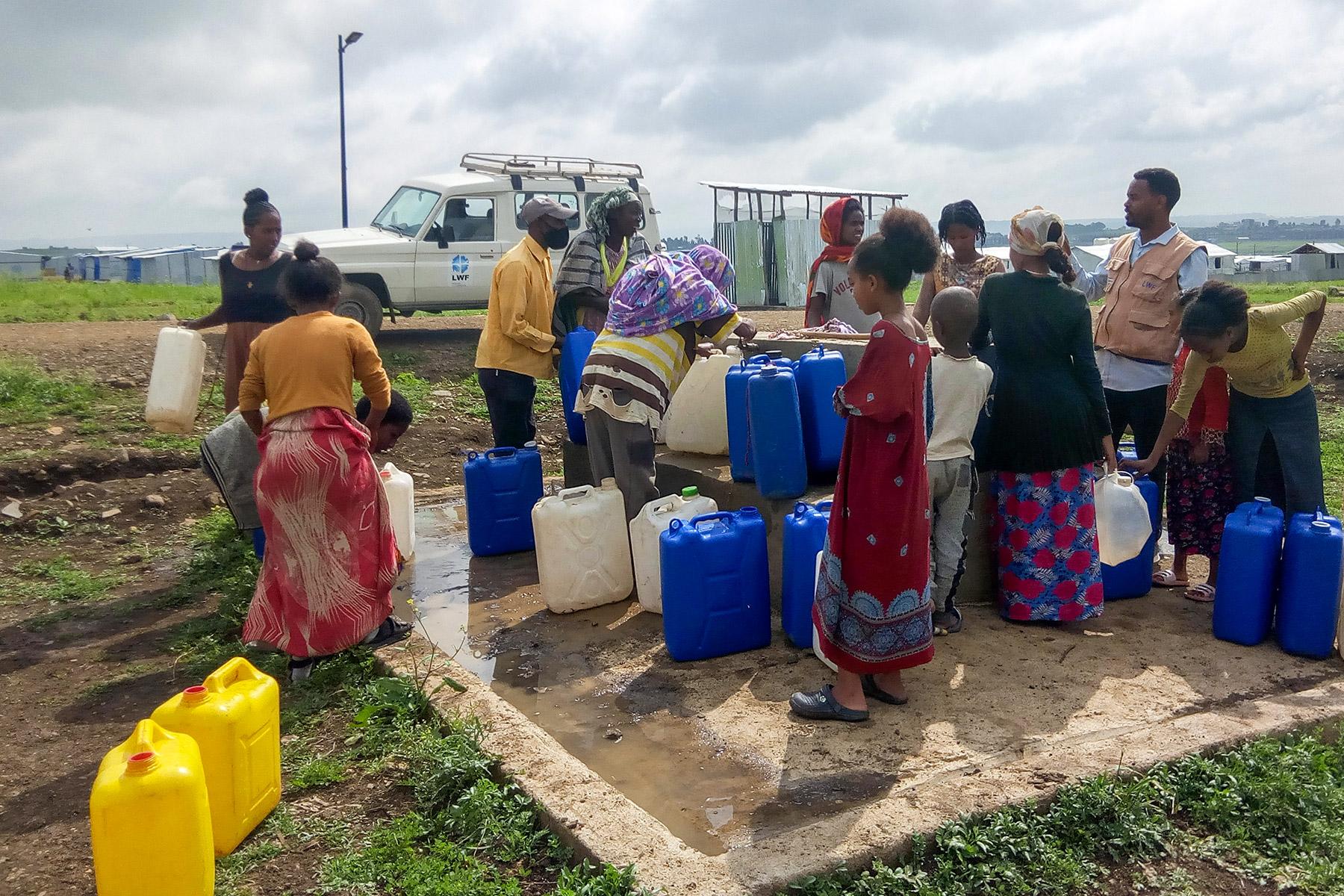 IDPs in Mekelle collecting water in Seba Kare IDP camp. LWF has constructed a water system in the camp, which was previously supplied with water by water trucking. Photo: LWF/ T. Debessu

(LWI) - As fighting intensifies in Northern Ethiopia, the Lutheran World Federation continues to provide humanitarian aid to people affected by the Tigray conflict. LWF has so far provided cash transfers, food, shelter, relief goods, sanitation and water to tens of thousands of people. The fighting, which broke out again at the end of August, has however made the delivery of humanitarian aid very difficult, says LWF Ethiopia Representative Sophia Gebreyes.

“In addition to the loss of life and destruction of infrastructure, the resumption of air strikes in and around Mekelle has meant that the humanitarian flights in and out of the region are suspended. The humanitarian corridor, bringing much-needed food assistance into Tigray by air and by land, has been closed abruptly.” The conflict comes in addition to a famine in the Horn of Africa. The United Nations estimates that more than 7.2 million people are in need of humanitarian assistance.

The humanitarian corridor, bringing much-needed food assistance into Tigray by air and land, has come to a screeching halt.

LWF together with its member church, the Ethiopian Evangelical Church Mekane Yesus, has been providing humanitarian aid in the Tigray region since the beginning of the war. The worsening security situation is making it increasingly difficult, however, to provide life-saving assistance.

In the Seba Kare IDP camp near Mekelle, LWF successfully constructed a water supply system. Prior to that water had to be brought by truck to the extremely arid region. As the new system was completed, potable water became accessible to almost 11,000 internally displaced people and host community members. “We, and all the other organizations who did the water trucking, can now use the funds we had put aside for water trucking for other life-saving interventions, such as provision of emergency shelter, relief goods, emergency food supply, protection services and community based psychosocial support among others,” says Charles Masanga, LWF Ethiopia Program Coordinator.

As the war intensifies, LWF has been forced to relocate staff from some of the operational areas in Southern Tigray and close to the border with Eritrea, to the province capital Mekelle. From here, LWF continues to assist the war-affected population - as long as the security situation will allow, Masanga says.

The war in Tigray, Northern Ethiopia, has been ongoing since November 2020. It is a conflict between the Tigray People Liberation Front, the Federal Government and allies.

The conflict is marked by alleged atrocities, some of which could amount to war crimes, including sexual violence as a weapon of war. It has caused a humanitarian crisis, made worse by the fact that the region had largely been shut off from humanitarian aid for a year and a half. On 24 March 2022, the Ethiopian government declared a unilateral humanitarian truce, in order to allow the delivery of humanitarian aid into Tigray.

The current hostilities started on 24 August breaking that truce with fighting breaking out in Southern Tigray, and spreading to the Western disputed region between the Amhara and Tigray regional states. “For humanitarian workers, who were hoping a peace deal would be struck by Ethiopian New Year this month, this is a major blow,” LWF Ethiopia Representative Gebreyes says.

In line with humanitarian principles, LWF expresses the urgent need to stop further harm and suffering caused by the conflict especially among children, women and other vulnerable groups in the community.LWF joins the international community in supporting initiatives that promote peaceful resolution of the conflict and pave the way for sustainable peace among the various communities in the Northern region of Ethiopia as well as the whole country.

LWF’s work in Ethiopia is carried out through the ACT Appeal (ICA, ALWS, PDWRF, ELCA), and in partnership with CLWR/ GAC and IOM.