A network to stop early marriage 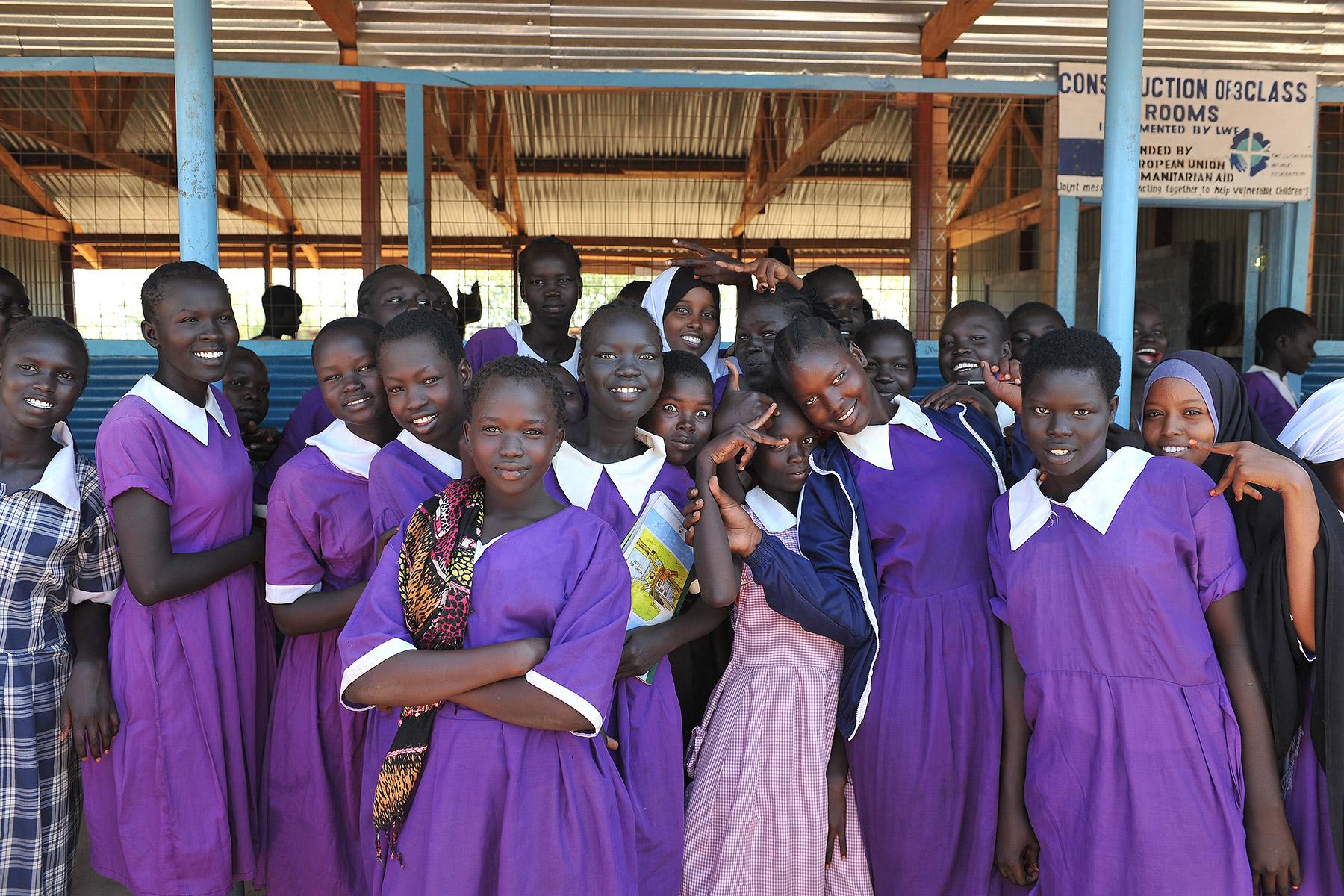 Girls in primary school in Kakuma refugee camp, Kenya. LWF is working to protect their right to education and a childhood without violence. Photo: LWF/ C. KÃ¤stner

(LWI) - Zawadi (name changed) was 16 when her father started constructing a new house in their compound in Kakuma refugee camp, northwestern Kenya. She was told that the house was for a paternal cousin, who was soon to marry. Only when her family took her to have her date of birth changed on her identity papers to make her appear older did she understand that she herself was the old man’s intended bride.

The Lutheran World Federation (LWF), which runs the schools and child protection programs in Kakuma, managed to rescue her and open possibilities for her to lead a more self-determined life. 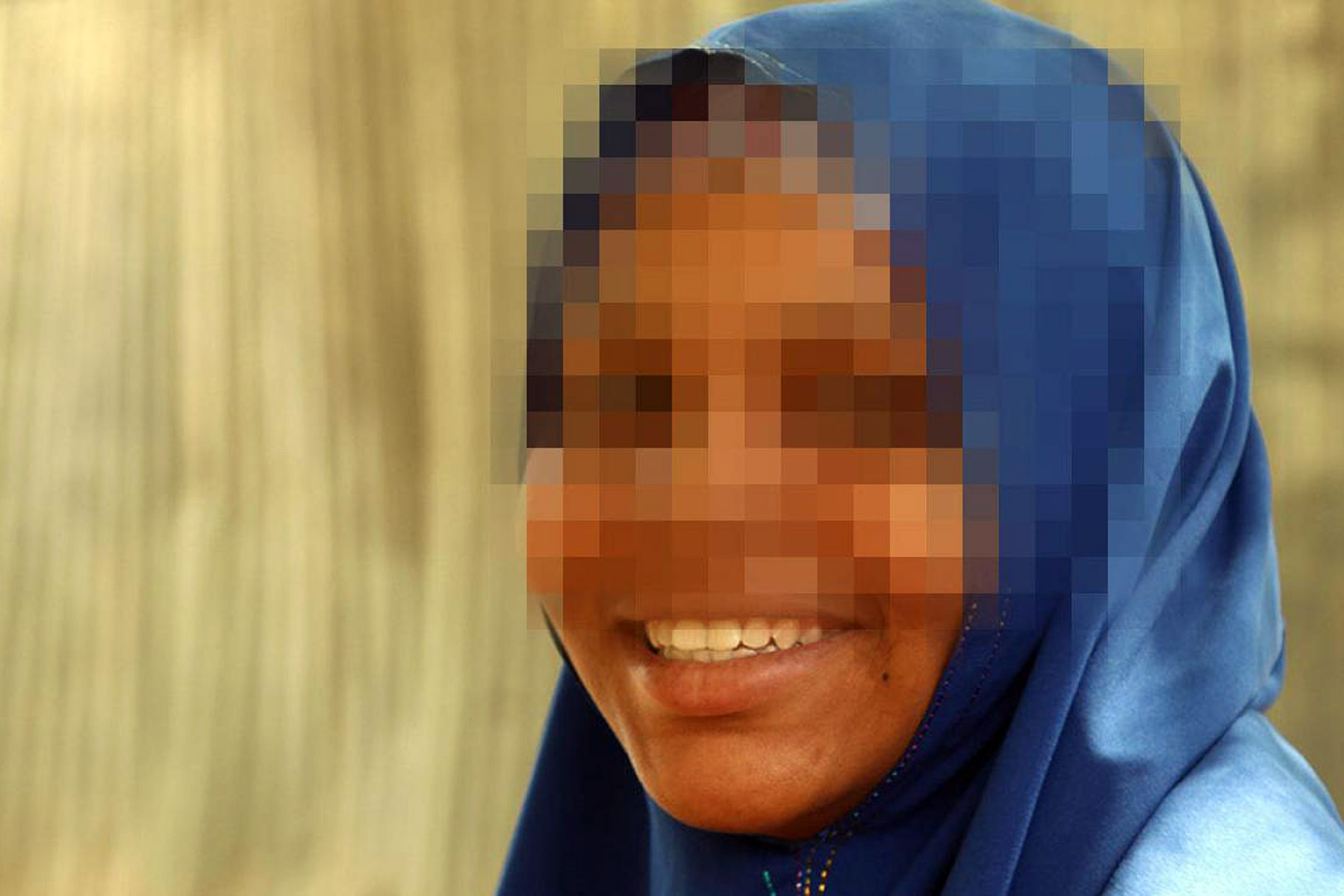 Zawadi (not her real name) escaped an aranged mariage due to her determination and courage. Photo: LWF/ Y. Baraza

Zawadi and her family are refugees from neighboring Somalia, who found a new temporary home in Kakuma refugee camp. Zawadi was a hard-working student in primary grade 7 when her family tried to arrange a wedding against her will. Not an uncommon occurrence, says Kapis Okeya, LWF protection officer in Kakuma. “LWF dealt with 50 cases, but we suspect that the actual number is ten times higher.”

The Kenyan law is clear, the legal age for marriage in the country is 18 years. In reality however, child marriage is not uncommon in communities, where law enforcement is far away and the dowry payment is a much-needed addition to the family income. 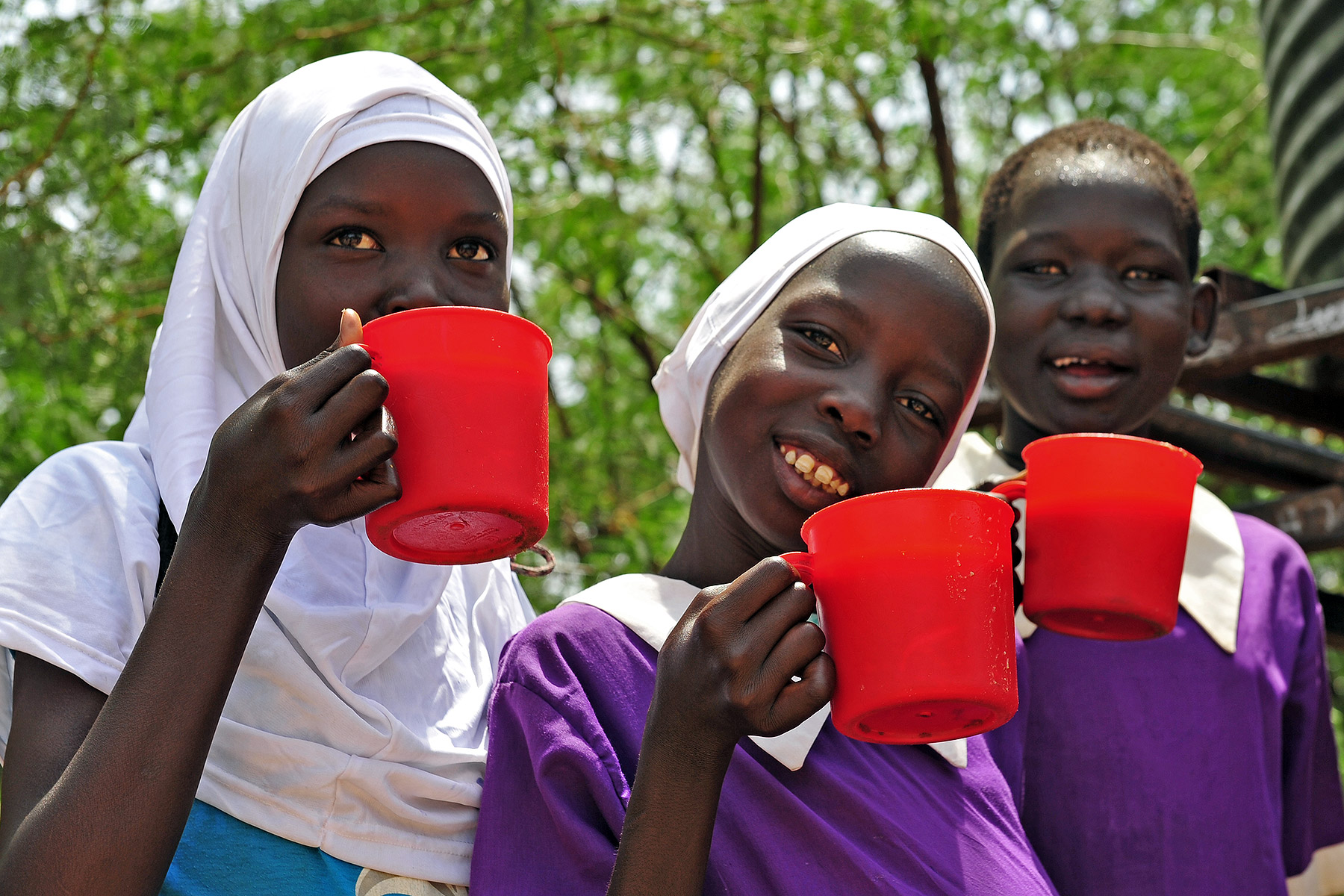 Girls in Bahr El Nahm primary school, Kakuma. While enrolment in the first grades in generally high, girls are often taken out of school when they become teenagers. Photo: LWF/ C. Kästner

LWF case workers hear about girls being abducted in the early morning hours and ferried in private vans back to their countries of origin to be married off. Focal teachers witness cases of underage girls being withdrawn from school to marry men of their father’s age. “In the early grades of primary school, the enrolment of girls and boys is at 50:50 but as they progress into middle and upper primary, girls drop out of school due to forced marriages, early pregnancies and teenage motherhood,” Okeya says.

In the early grades of primary school, the enrolment of girls and boys is at 50:50 but as they progress into middle and upper primary, girls drop out of school due to forced marriages, early pregnancies and teenage motherhood. As a result, few girls transition to secondary education and ultimately have lesser chances of a career.

“As a result, few girls transition to secondary education and ultimately have lesser chances of a career,” he adds. In the last grade of primary school, as well as in secondary schools, for every girl there are three boys attending.

LWF has been managing the schools in Kakuma since the camp was set up in 1992. Child protection is an integral part of this work. A network of protection focal teachers raises awareness among students and parents, they conduct home visits, provide psychosocial first aid to children suffering from abuse and refer students to counselling services.

Above all, they are trained to act quickly when a protection case comes to their attention. Zawadi missed school when her family took her to get new papers. When the teacher asked about the absence, she told him about her situation.

“She cried, told me that she was too young and the man was too old. She insisted that she wanted to complete her studies. She was scared and did not want to get married,” the teacher says.

Zawadi was admitted to a safe shelter for girls and women. The case was reported to Kakuma police station and her father, the cousin and the man who helped forge her age were arrested.

The girl received counselling and has been enrolled at a girls’ boarding school to complete her studies in a safer environment. “She is doing well and keeping up with the curriculum”, Okeya says. 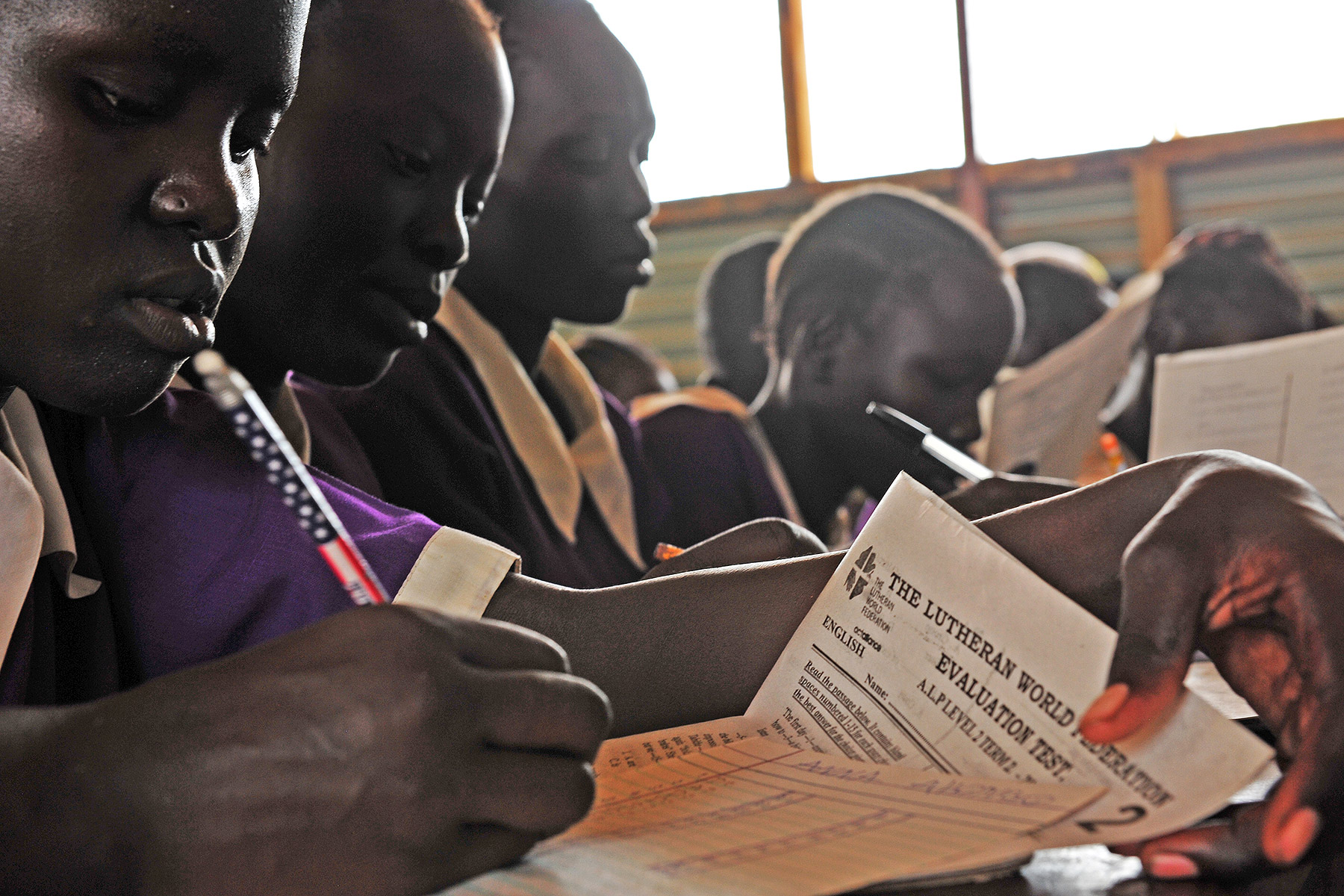 Students in the Advanced Learning Programme sit their final exam. Getting a good education is already a challenge for many refugee students, who missed school due to conflict. Photo: LWF/ C. Kästner

It takes a lot of courage for a girl to confide in this network outside the family context. “It wasn’t easy. Family members gave me a hard time, making me think I made a mistake reporting the matter at school, as much as I knew the decision was right,” says Zawadi. “No one should be made to marry someone against their will and not when they are children. I look forward to going back to school and rebuilding my life”. 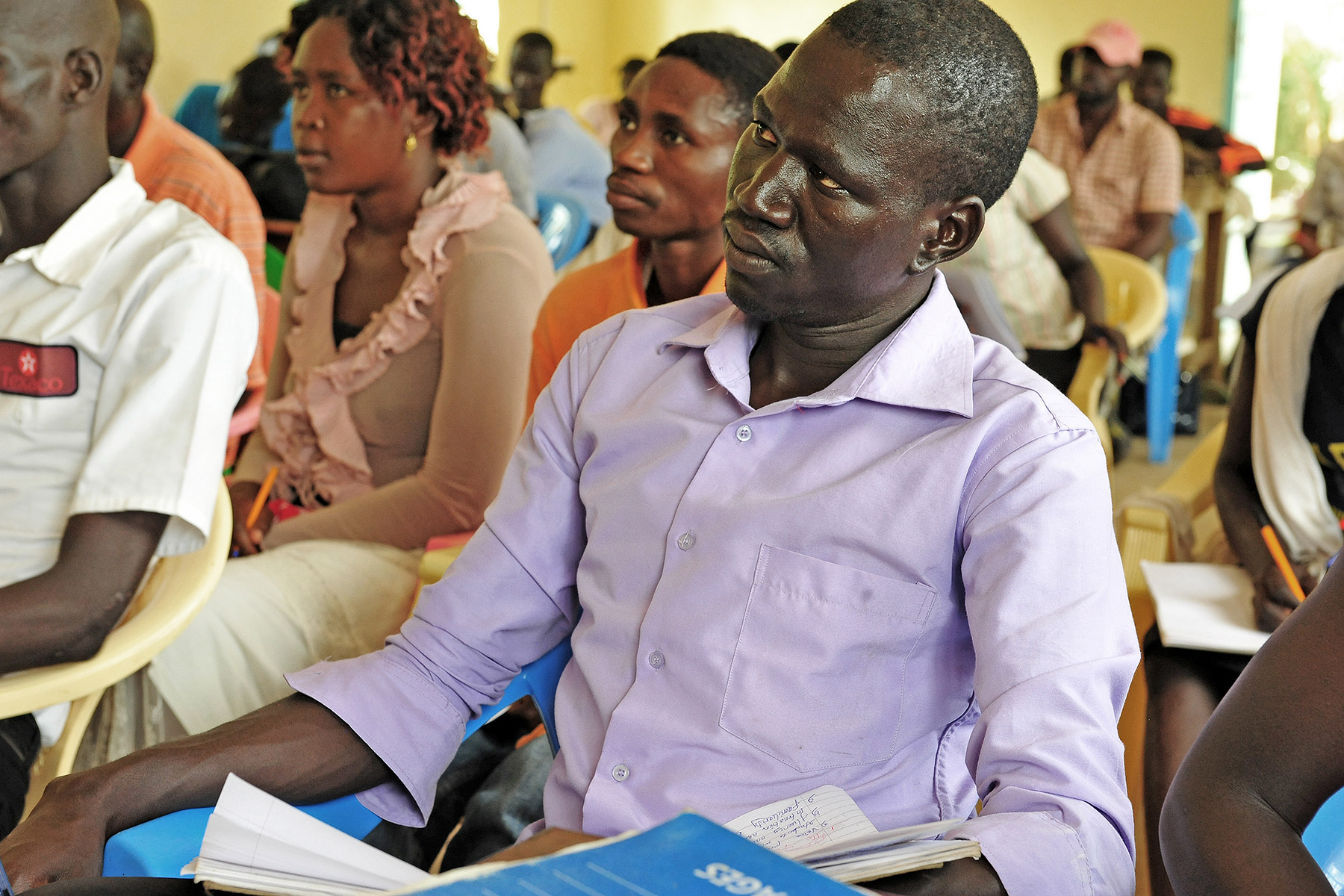 Since the beginning of the year, the 42 protection focal teachers have received a series of trainings to better be able to detect and respond to violence against children.

While Zawadi’s case had a happy ending, the LWF team also sees many young refugees who do not receive help in time. Child protection and safe-guarding in protracted emergency contexts are specialized skills, in which teachers need to be trained. Currently, there are only two protection focal teachers for each of the 21 primary schools managed by LWF. Each one of these schools has about 3,000 students. The camp needs more trained teachers, more awareness-raising campaigns on sexual and gender-based violence, also for boys who are in danger of being forced into exploitative labor.

The focal teachers are also important because a case does not end with a police report and a safe house for the child. After the protection work has been done, LWF staff work to diffuse tension in the family. “We meet with the family and listen to them”, Okeya says. “Depending on the nature of the case, we initiate alternative dispute resolution or arbitration.”

In Zawadi’s case, reconciliation was possible. “The child’s father accepted that he did wrong and asked his daughter for forgiveness”, Okeya says. While she will from now on live in a boarding school, Zawadi can still return to her family. “Soon, the girl will be reunited with her family in the community.”

LWF is the lead implementing partner for UNHCR in basic education for refugees in Kakuma and Dadaab refugee camps in Kenya. In Kakuma, LWF also has the mandate to implement Child Protection in schools to ensure that children access quality education in an environment that is safe for their growth and development.

In Kakuma, LWF manages programs in Primary and Preschool Education with more than 80,000 learners enrolled, Child protection with about 16,000 direct beneficiaries and over 102,000 indirect beneficiaries as well as Youth Development Programs which involve sports, performing and visual arts and Mentorship. LWF also runs the Angelina Jolie boarding school for girls at risk.

Since the beginning of this year the Protection Focal teachers in each of the 21 primary schools managed by LWF in Kakuma refugee camp have been taken through a series of trainings to sharpen their knowledge and skills in prevention, detection and response to violence, exploitation and abuse of children. This has been a result of the integrated approach and good coordination between the Education and Protection sectors towards protection mainstreaming in schools. For 100 USD, a teacher can be trained in protection and child safeguarding. Housing a girl at the shelter cost 400 USD/ month.