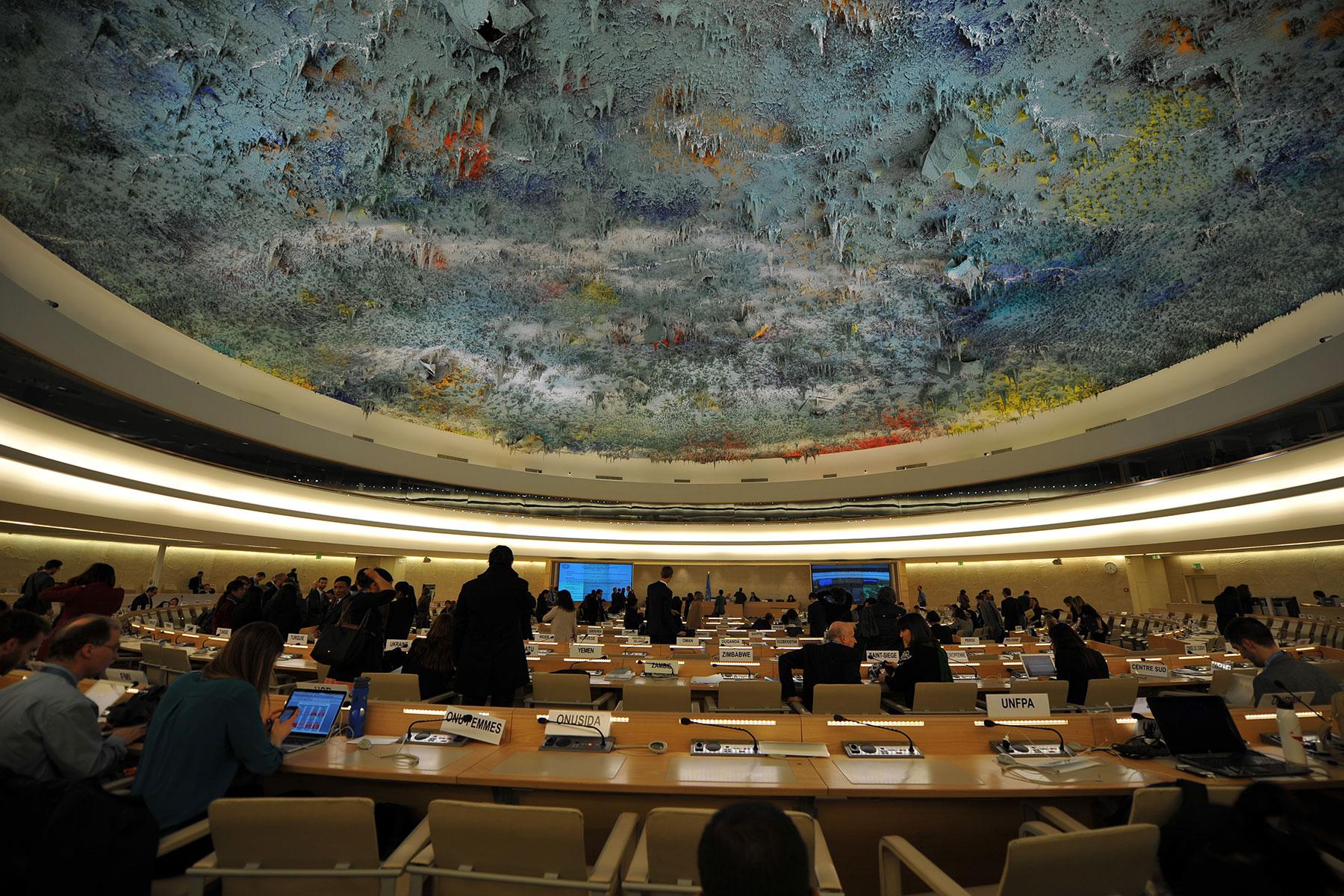 The ceiling of the Human Rights Council, in the Palais des Nations. Because of the COVID-19 crisis, the 44th session took place online. Photo: LWF/C. KÃ¤stner

Advocacy for human rights in Guatemala, Palestine, and of migrants and indigenous populations

(LWI) – The impending annexation by Israel of parts of the West Bank in Palestine, the importance of protecting judges and their independence in Guatemala, and acts of racially motivated violence and discrimination against migrants and indigenous population in several countries, were among the issues raised by the Lutheran World Federation (LWF) at the United Nations Human Rights Council.

The LWF delivered three oral statements at the 44th session of the Human Rights Council, which concluded on 17 July 2020.

The LWF expressed concerns about the current situation in Guatemala regarding the election of judges for the high courts. It urged the HRC to ensure transparency in the election process and to protect those electing the judges from threats and intimidation.

LWF furthermore expressed its concern over the decision of the Guatemalan government to terminate the mandate of the International Commission Against Impunity, in spite of the Commission’s achievements in fighting corruption in the country.

LWF voiced its concern about the intention by the government of Israel to annex parts of the West Bank. LWF reminded Member States that such a step would not only violate international law but also severely affect the prospect of a two-state solution and the prospect for peaceful coexistence between Palestinians and Israelis.

LWF underlined the rights to health for Palestinians living in Gaza. From its work at the Augusta Victoria Hospital on the Mount of Olives, LWF is familiar with the challenges faced by critically ill patients to obtain a permit for live-saving treatment outside Gaza. LWF recalled the resolutions of the Human Rights Council, in its 43rd session, where the Council expressed its concern over the Israeli permit regime as a discriminatory practice against Palestinians and reiterated the responsibility of Israel to grant exit permits for Palestinians who need medical treatment outside Gaza.

The LWF is concerned by the widespread racism, violence, and systemic injustice against African Americans in the United States of America. LWF brought to the attention of the Human Rights Council and the Special Rapporteur concerns regarding violence against indigenous peoples and migrants all over the world, who face extreme forms of racism, xenophobia, and discrimination.

India: From destitution to a dignified life and self-respect
news

Human Rights Council: Upholding the right to freedom of religion or belief
news