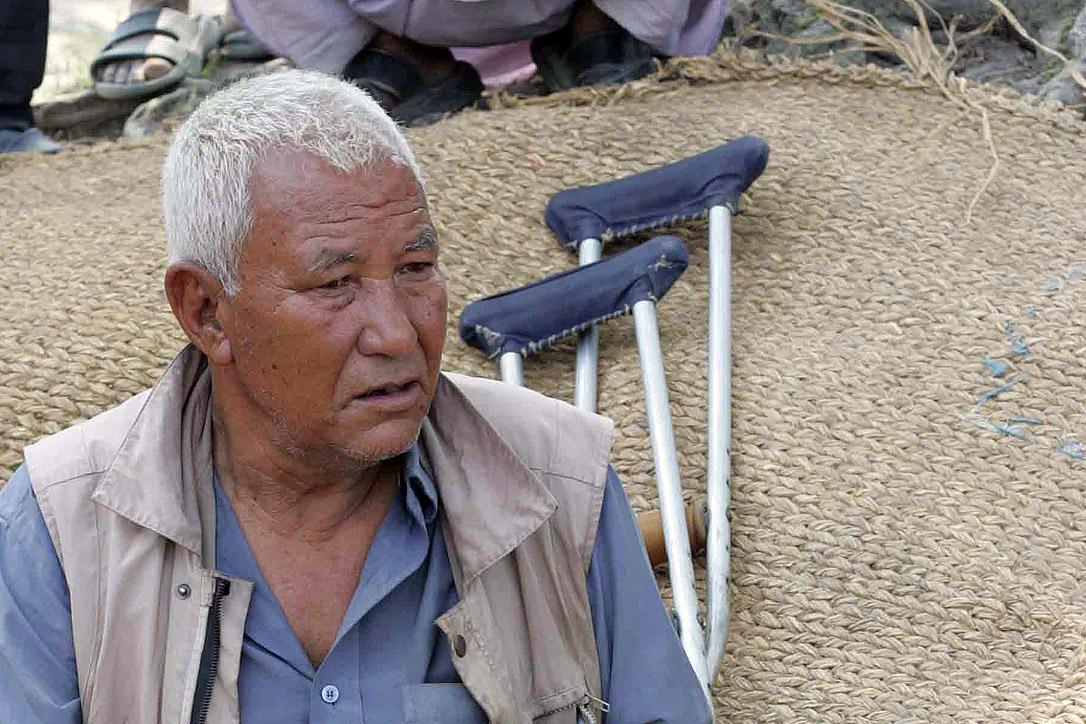 "Toughest days are still ahead"

KATHMANDU, Nepal/GENEVA, 8 July 2015 (LWI) - While he could see everyone else run from their homes when the earthquake hit on 25 April, Dharma Lal Shrestha, 63, of Shankarapur Municipality, Sanagaun, was helpless. He knew it was an earthquake and that he needed to leave the house but his physical disability made it impossible for him to move. "As the house shook, I was on the first floor, praying to God for help," he said.

Shrestha’s leg was amputated in June last year following a gangrene infection. Since then, all he can do is crawl. He needs assistance to climb stairs. As he is also partially paralyzed he cannot even move on crutches. "Everyone was concerned about their own safety,” he says. “There was nobody around whom I could call for help.”

“Everyone was concerned about themselves”

The earthquake hit hardest those who were already struggling. Shrestha’s 65-year-old neighbor, Krishna KC, has lived with only one leg for more than 30 years. Life has been difficult in that time. His son married and moved away, and became estranged from him. Together with his wife he lives in a rented property. KC was resting when the earthquake started. "My crutches just fell down and I leaped to reach to the window for support," he said. The house wall collapsed on him. He lost consciousness. "My family thought I was dead,” he recalls. Still, he managed to save himself. "My wife was crying when I emerged from my house," KC says.

Shrestha has two sons and three daughters. They had left their father on the upstairs floor so he could rest on that Saturday but when the earthquake hit, none of them were at home. "I was lucky enough. Although the wall collapsed, it did not fall on my side. I sustained only minor injuries," he said, recalling his harrowing experience. The upper floor collapsed in the earthquake.

When his son arrived 15 minutes later to find his father alive in the middle of all the destruction, the younger Shrestha burst into tears. "It must have been a God who saved me. My own uncle, who lived next to our house, died," Dharma Lal Shrestha, a practicing Hindu, says.

The Lutheran World Federation (LWF) together with its partners provided the families of Shrestha  and KC  with food and other relief goods when they had nothing to eat and no place to live. The food included rice, lentils, cooking oil, salt, spices and milk powder for small babies. It also provided the families with a tarpaulin to build a make-shift tent and gave them mattresses, hygiene kits and a water bucket, as well as a water purifier. They also received assistance so they could build toilets. "They were a great help to us,” Shrestha says.

The LWF also provided psycho-social counseling to the earthquake affected families in Sanagaun, one of the worst affected villages in Lalitpur district. Although Shrestha feels he has gone through the toughest time already, he is worried about the period ahead. His family does not have any food grain in stock. As they do not own land, there is no hope of harvesting the crops any time soon. Shrestha’s son used to work in a motorcycle repair company but quit the job to assist his paralyzed father. "We had collected some grain, but whatever food stock we had was buried under the debris. We are wondering what to do next," says Shrestha’s son. "Food and shelter are the main worries now."

For KC, the earthquake also improved family relations. "My son still lives separate from us, but now we are on good terms again,” he says. "Though my house is destroyed, I am happy the earthquake has mended our relationship."

He is presently living in a makeshift house. The rubble of his earlier house is yet to be cleared. "I lost everything but got a new life," he added. "Despite being buried under a house wall, I am still alive."

Strengthen those who have been hit hardest
news