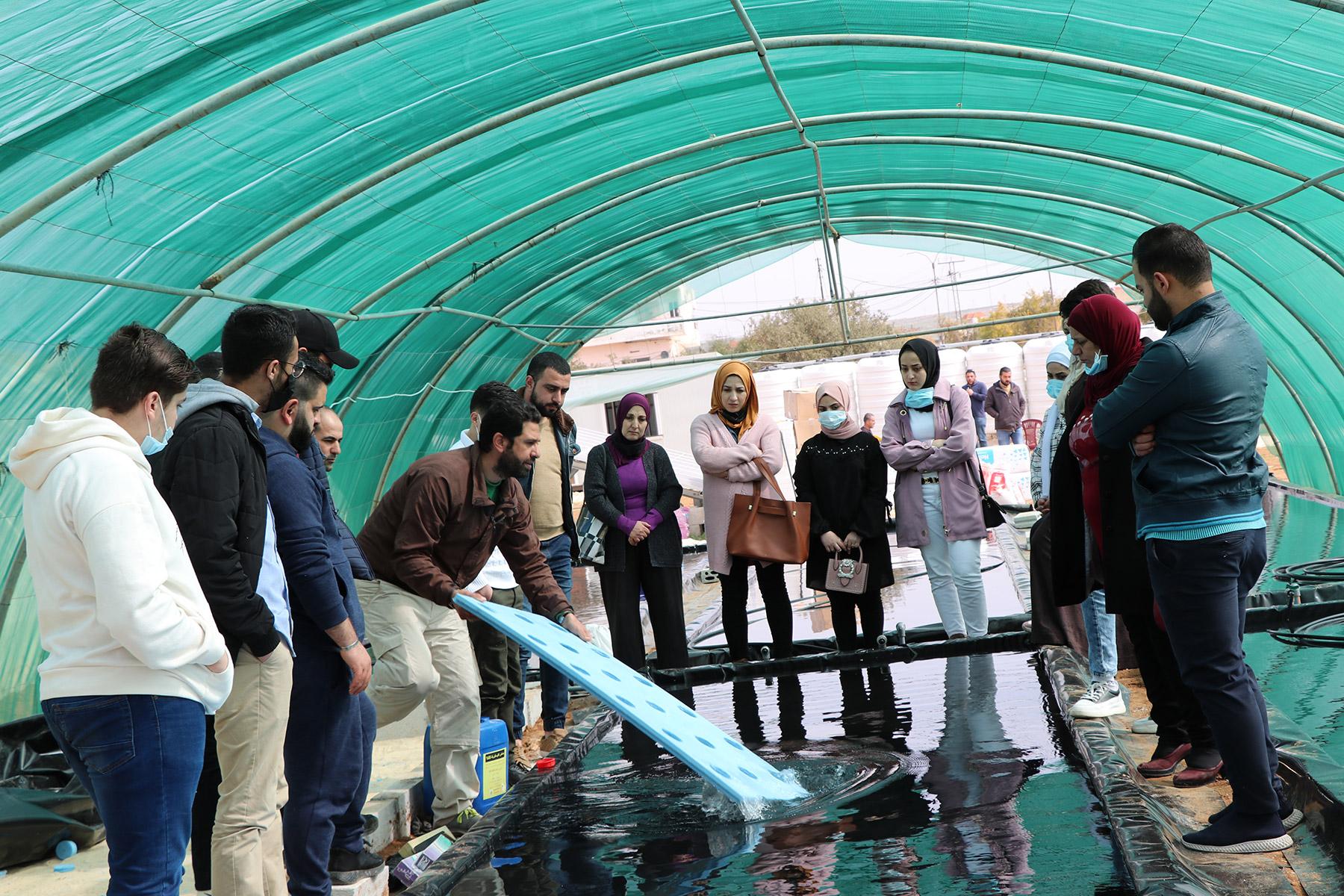 (LWI) - Improving food security for Syrian refugees and host communities in Jordan, while at the same time promoting climate justice in the Middle Eastern nation. Those are the twin goals of an innovative hydroponic farming system which The Lutheran World Federation (LWF) in Jordan has installed in Al-Ramtha city, located in Irbid Governorate in the far northwest of Jordan close to the Syrian border.

Hydroponic farming is a type of horticulture which involves growing crops or other plants without soil in water that is enriched with mineral nutrients. The new installation for use by the community in al-Ramtha is part of a livelihoods project funded by the Evangelical Lutheran Church in America. It is enabling people to produce nutritious vegetables and fruit in a part of the country where over 20 percent of all Syrian refugees in Jordan live.

Gardening has been a core component since the beginning of the project in 2018, but in previous years this only entailed theoretical and practical training on conventional home gardening techniques. Despite the success of the training, refugees and Jordanian nationals faced barriers such as being prohibited by landlords to farm any adjacent land. Furthermore, government-provided housing offers minimal living space and no garden for them to put their skills into practice.

LWF’s Country Representative in Jordan, Ameera Khamees takes up the story: “To ensure accessibility to the project for these people, we decided to pilot a hydroponic system for use by the community in Al-Ramtha. This innovative approach not only generates a sustainable source of vegetables at reduced production cost, but also encourages an exchange of knowledge and skills which improves relations between the refugees and host communities in the area.”

Besides the direct benefits to local people, the project aligns with LWF Jordan’s strategic principle of achieving climate justice in one of the most water-scarce countries of the world. Water conservation practices are essential and hydroponics, considered by many as the future of agriculture, is known to use 90 percent less water than conventional farming. Furthermore, the new system is powered by photovoltaic panels, which also reduces fossil fuel energy consumption. 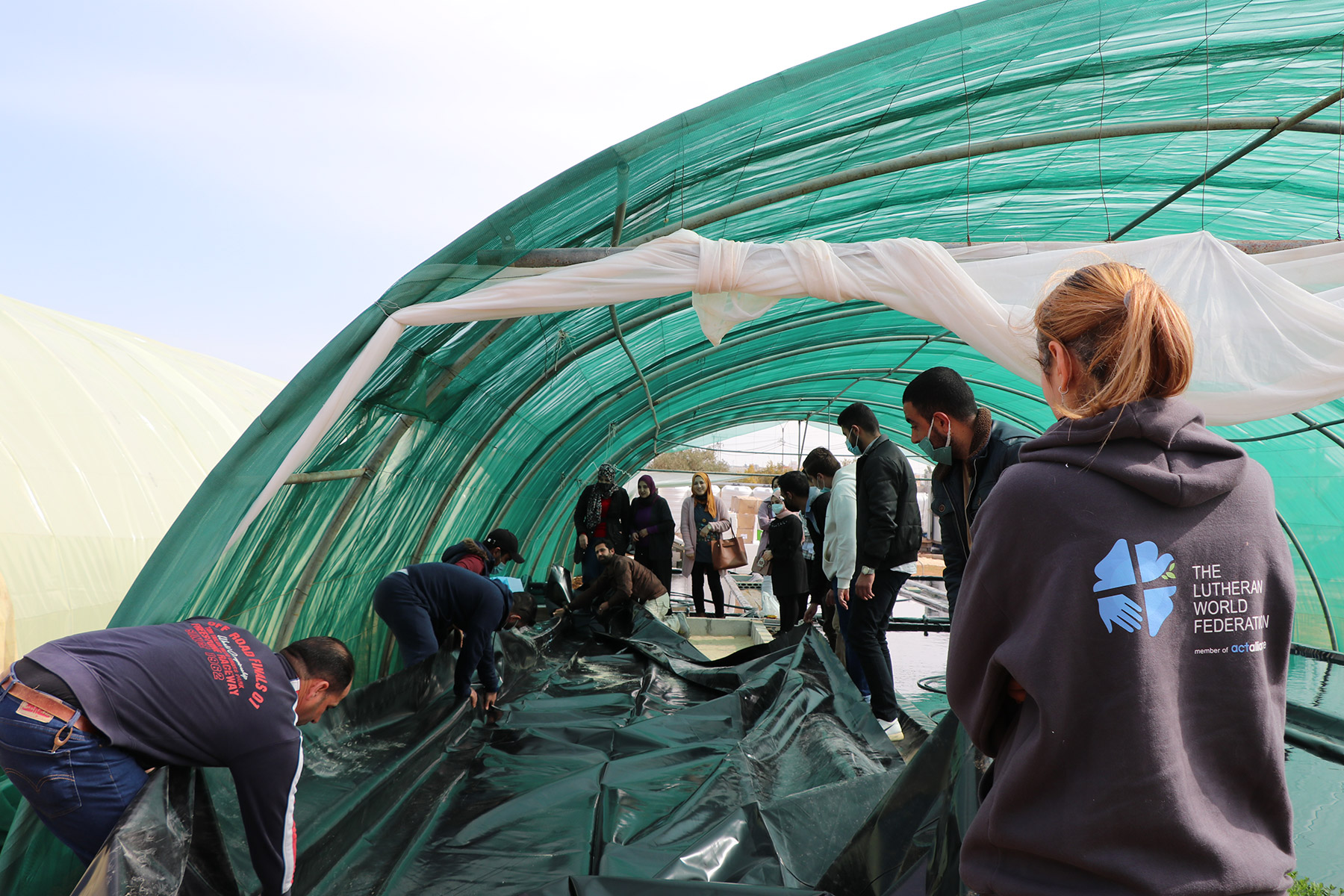 After the greenhouse was installed, the first batch of 30 participants received training on how to grow vegetables and fruits. Photo: LWF Jordan/Daham Al-Hamad

Following the installation of the greenhouse, an initial group of 30 participants received skills training in all aspects from the system design to the harvesting of fruits and vegetables. Islam Shdefat, Program Manager for LWF Jordan says: “We are training people to use the hydroponics system as a smart alternative to conventional farming to overcome the multiple challenges that the local communities in Al-Ramtha face, as well as to combat climate change.”

We are training people to use the hydroponics system as a smart alternative to conventional farming to overcome the multiple challenges that the local communities in Al-Ramtha face, as well as to combat climate change.

Caroline Tveoy, LWF’s Regional Program Coordinator for the Middle East and North Africa, notes that “across the region we see the effects of climate change through increasing drought, heavy rainfall and flash floods. In the mid-term review of our country strategy in Jordan last year, we identified a need for more emphasis on water conservation and sustainable agriculture practices. I am encouraged to see that our team and the communities in which we work are already taking steps in that direction, while also contributing to improved livelihoods for Syrian refugees and vulnerable Jordanians.”