Gains and Challenges for Churches, 20 Years after Beijing 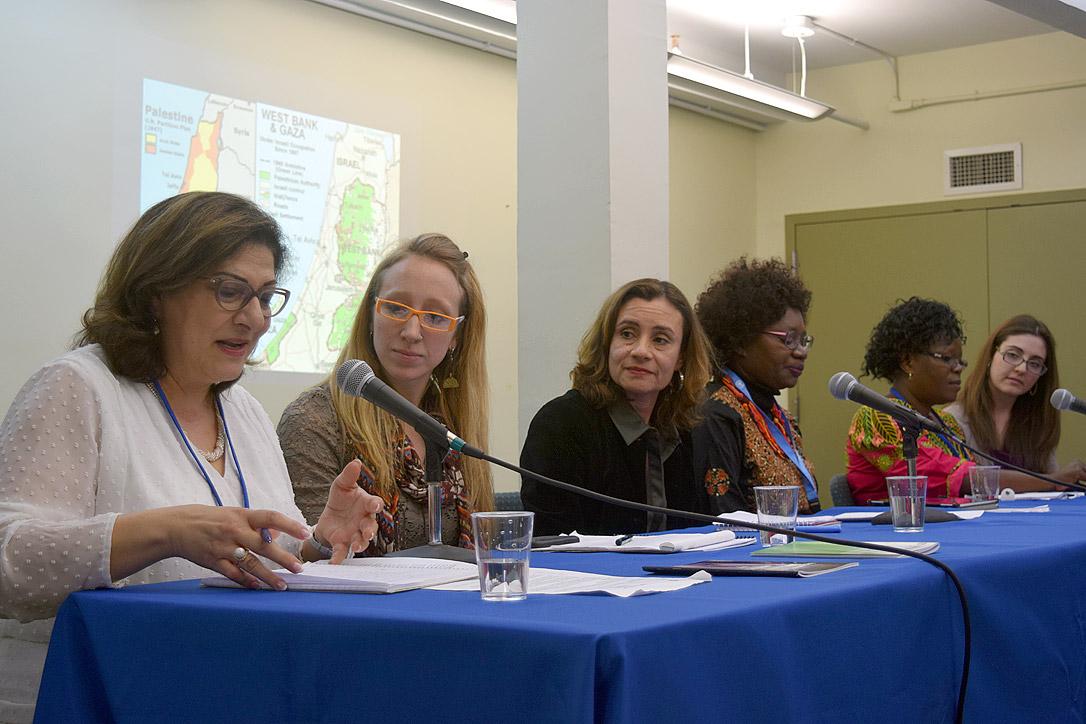 Panelists at the LWF-WCC side event at the 59th session of the UN Commission on the Status of Women, in New York, 12 March. Photo: Mikka MacKraken/ELCA

(LWI) – Twenty Years after the United Nations Beijing Platform for Action (BPFA) was formulated to advance women’s rights, churches have made significant contributions in articulating processes and action for gender justice in the different world contexts.

The Lutheran World Federation (LWF) and the World Council of Churches (WCC) provided a platform to share some of these experiences at a side event during the UN 59th session of the Commission on the Status of Women (CSW) in New York, 9-20 March.

She shared the story of a 13 year-old, rescued by KELC from a child-marriage. “But the work has to continue to find ways of entering in dialogue with the parents and to challenge the customary laws.”

Jen Engquist, Evangelical Lutheran Church in America (ELCA) focused on the intersection between justice and faith from her own experience as director of Churches United for the Homeless in Moorhead, Minnesota.

She said the vulnerability of women and girls being trafficked and abused also reflected the lack of commitment from the US government in adopting strong legislation that favors greater protection for women and severe consequences for the perpetrators. The failure to ratify the Convention on the Elimination of All Forms of Discrimination Against Women (CEDAW) is one such gap, she said.

Engquist also spoke about the double vulnerability of native American women and girls living in reservations, where tribal courts have the autonomy to make ruling in cases of sexual abuse committed by the men. “This exposes the victims to a total lack of protection,” she added.

Colleen Cross, representing the Roman Catholic Church in El Salvador, shared her experience with grassroots’ women in her country and Central America. The end of civil wars in the 90s’ ushered in other forms of violence, such as gangs made up of the orphans and resentful youth who had witnessed the murder of relatives and painful situations of abuse and internal displacement, she said.

The current massive migration of unaccompanied minors towards Mexico and the United States “is a phenomenon resulting from the intolerable levels of violence in El Salvador,” Cross added.

From the Evangelical Lutheran Church in Jordan and the Holy Land (ELCJHL), Suad Younan referred to ELCJHL’s emphasis on the quest for liberation in the gospel, but she also highlighted the heavy impact of social and cultural norms on women and girls as a challenge.

Younan concluded that education and training for women was the flagship of church action over the past two decades, with schools in Palestine expanding opportunities not only for professional qualification but also for individual protection. She spoke about a 15 year-old, who, after being raped by her boyfriend as coercion into marriage, could obtain trauma counseling and support from a pastor, access medical attention and begin to move on with her life. “This is in a context where she most likely would have been victimized beyond sexual abuse by the so-called ‘honor-killing’ to clean up the family’s name,” Younan added.

Dr Fulata Mbano L. Moyo, WCC program executive for Women in Church and Society, said faith and women’s advancement can be articulated “when they find liberation and hope in God’s promise for both women and men.”

Nobel Peace laureate Leymah Gbowee, a Lutheran from Liberia, encouraged people of faith to “welcome these discussions also to the pulpits” and name domestic violence as an issue affecting the congregations.

“Break the silence by being radical as Jesus, is the response that the churches need to offer to achieve gender justice,” Gbowee added.

The side event moderator Ms María Cristina Rendón, LWF Women in Church and Society (WICAS) program, underlined the value of assessing the progress made and remaining challenges since UN member states adopted and committed to implement BPFA at the Fourth World Conference on Women in Beijing, China, in 1995

“Starting with ‘Her-stories’ of women’s engagement in church ministry, articulating theology, taking leadership and implementing a Gender Justice Policy for the LWF, are important contributions towards the global commitment to realize the BPFA,” she added.

The LWF and WCC are part of the Ecumenical Women, a coalition of Christian denominations and organizations at the 2015 CSW.