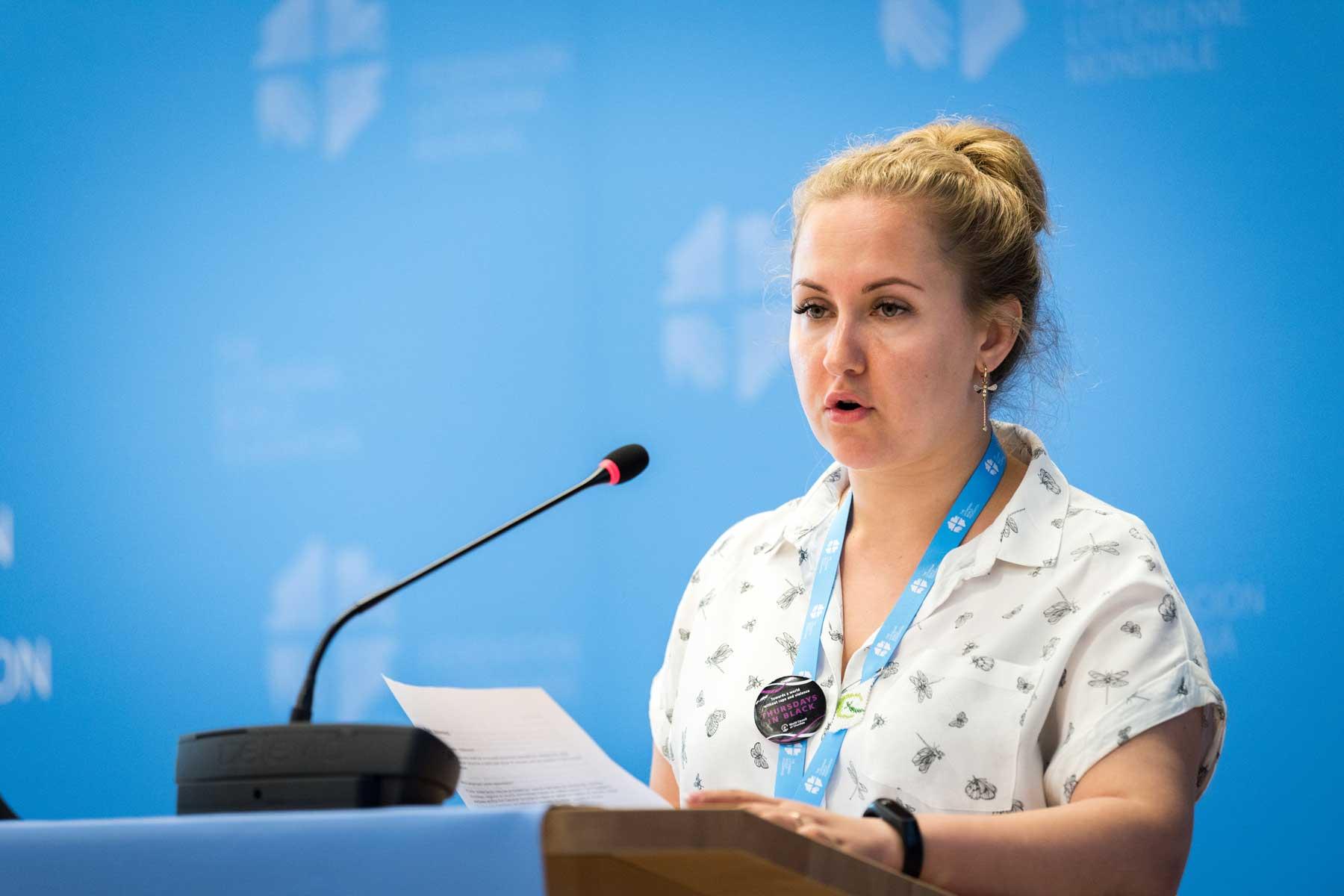 Ms Vera Tkach, chairperson of the Ad-hoc Committee for Advocacy and Public Voice, presents the resolution on Nigeria to the LWF council. Photo: LWF/ Albin Hillert

(LWI) - During its meeting in Geneva this week, the Council of the Lutheran World Federation (LWF) adopted a resolution on the situation in North-East and Central Nigeria, extending prayers and solidarity with the churches and people of Nigeria and condemning communal violence between farmers and Fulani herdsmen, which has cost hundreds their lives in recent months. The Council calls on the government of Nigeria to halt further violence, and initiate a peace process.

While recognizing there have been previous disagreements between cattle herders and farmers, the Council notes that “recent attacks by the marauding Fulani herdsmen seem to be different in dimension, scope and intensity as the herdsmen are heavily armed as reported by eyewitnesses.”

A recent attack by Fulani herdsmen on a congregation of The Lutheran Church of Christ in Nigeria (LCCN) in the Adamawa state is reported to have cost the lives of more than 18 people, mostly women and children.

Therefore, the Council is deeply concerned that the escalating violence has gone beyond ordinary disagreements and is being motivated by political, ethnic and religious factors as well as the desire to grab ancestral land of the sedentary communities.

The Council expresses deep concern “that the escalating violence has gone beyond ordinary disagreements and is being motivated by political, ethnic and religious factors as well as the desire to grab ancestral land of the sedentary communities.” It “condemns in the strongest possible terms the violent escalation in the regions and the deplorable killings, including women and children in their homes and places of worship.”

The Council calls upon the Nigerian government to investigate the recent attacks and hold the perpetrators responsible. It calls for a “comprehensive and impartial disarmament campaign to end the proliferation of arms in the hands of the civilian population, including the Fulani herdsmen.”

The Council furthermore calls upon the government to “initiate a comprehensive peace process led by religious leaders and traditional elders to amicably address the underlying causes of the conflict, serve justice and accountability for the lives lost, and the destruction of property, so as to foster reconciliation and mutual peaceful coexistence in the region and the country at large going forward.”

The Council calls upon LWF Member Churches to pray for peace in Nigeria, consider solidarity visits and advocate with their governments to raise the above mentioned concerns with Nigerian authorities.

Read more about the conflict

Photos of the Council

The 2018 LWF Council meeting takes place in Geneva from 27 June - 2 July. The theme of the Council is “Freely you have received, freely give” (Matthew 10:8, NIV). The LWF Council meets yearly and is the highest authority of the LWF between assemblies. It consists of the President, the Chairperson of the Finance Committee, and 48 members from LWF member churches in seven regions.

Being the church in times of COVID-19
news