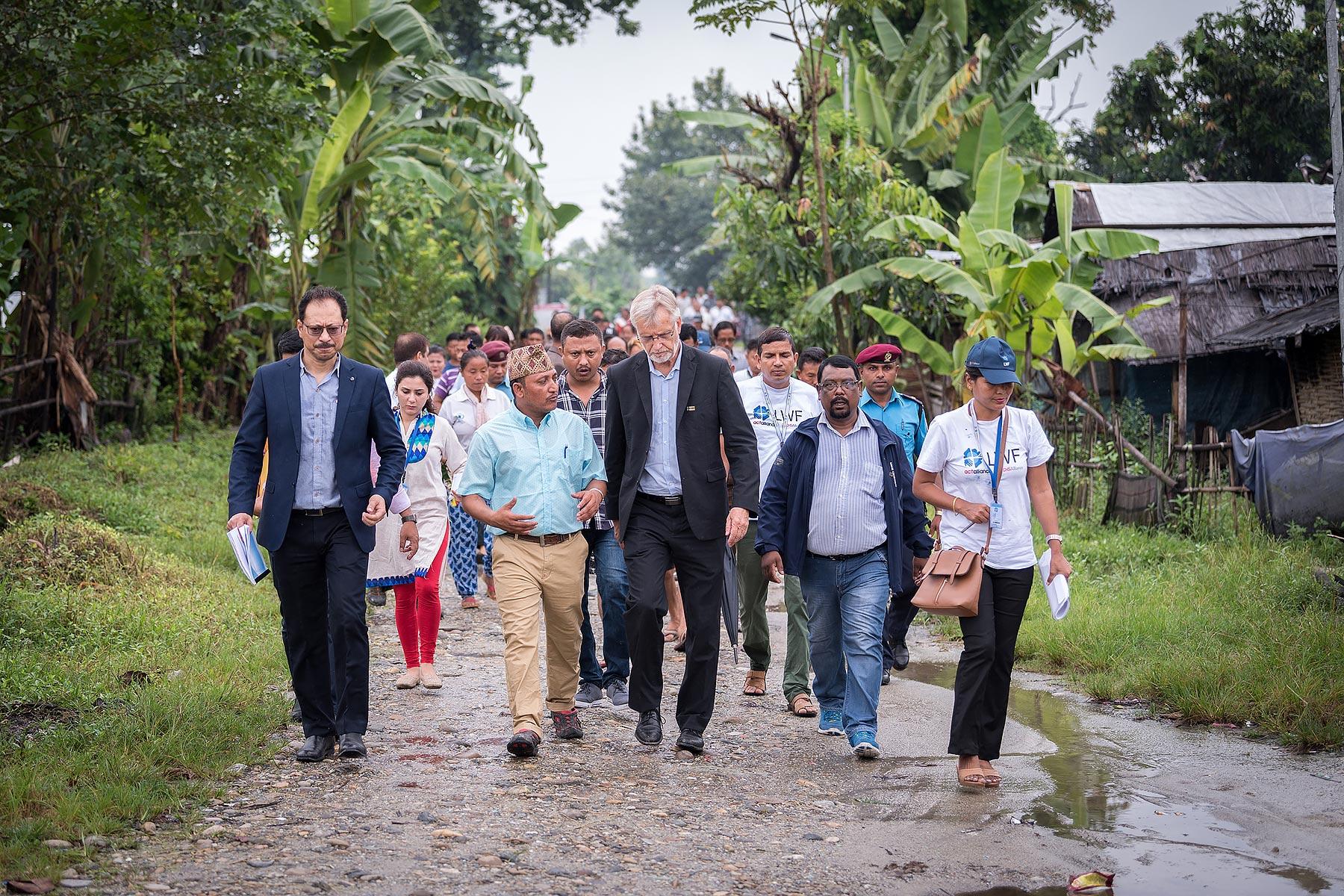 (LWI) - On his visit to a Bhutanese refugee camp in Nepal, Rev. Dr Martin Junge, general secretary of the Lutheran World Federation (LWF), has advocated for a durable solution for the close to 6,700 refugees who still remain in the country.

It’s the end of monsoon season in Damak, a town in Nepal’s easternmost province, and far from the mountainous areas of the north, south eastern Nepal still floods easily. A thin layer of water covers the expanse of intensely green plantations and fields, children run ankle-deep in mud as they play on the rural football fields, and water fills deep potholes on the east-west highway.

For the past three decades, this area of Nepal has become the temporary home of more than 100,000 refugees from Bhutan. Through major relief and advocacy efforts, the majority of them have now been resettled in third countries. As Nepalese and Bhutanese authorities are still to come to an agreement on durable solutions, almost 6,700 still remain after the UNHCR-led third-country resettlement programme closed for new enrolments in 2016.

The refugees are hosted in two camps in the Jhapa and Morang districts, receiving support from the LWF World Service programme. 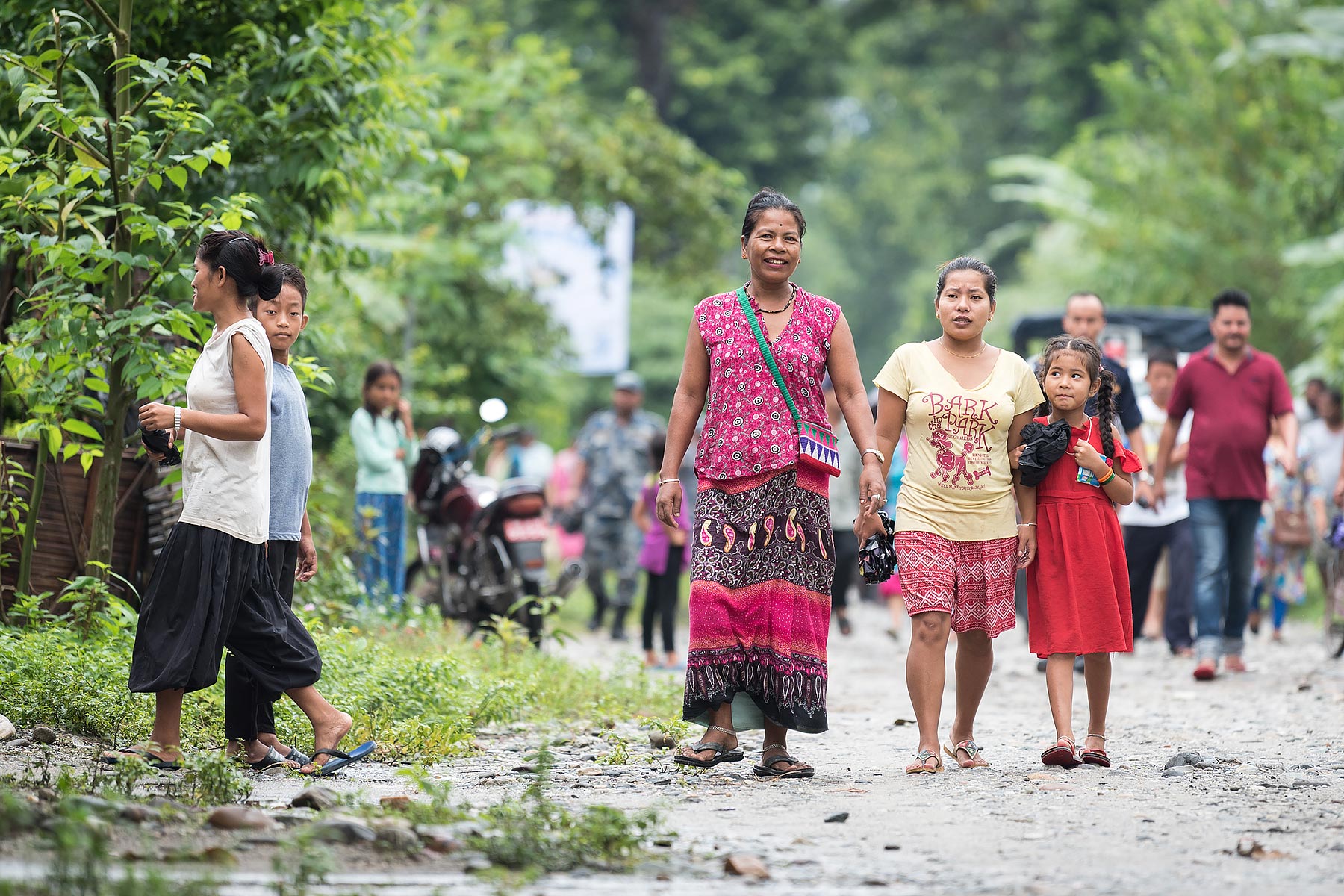 The Beldangi refugee camp hosts the majority of the 6,699 registered Bhutanese refugees currently in Nepal.

“As Christians, we are called to serve, and while it seems some other organizations may now be leaving Damak after the closing of the resettlement programme, the LWF is committed to staying, to seeing this process through” says LWF general secretary Rev. Dr Martin Junge, who visited the Beldangi camp in Damak in September – the camp that holds the majority of the 6,699 Bhutanese refugees who remain in Nepal.

As Christians, we are called to serve, and while it seems some other organizations may now be leaving Damak after the closing of the resettlement programme, the LWF is committed to staying, to seeing this process through

“We will leave no one behind,” Junge affirmed.

Camp secretary Rev. Tikaram Rasaily, himself a Bhutanese refugee, identifies a range of aspects to a durable solution for the Bhutanese refugees: family reunification, repatriation, local integration, and reopening of the third-country resettlement process.

“But we also need a new census, to make sure there are no unregistered refugees in the camps,” Rasaily says, as without being registered, refugees lose their right to support.

For the past two years, the refugees themselves have taken on the tasks of overseeing monitoring, maintenance and governance of the Beldangi camp. The model helps build a more independent, strong and self-reliant community.

Self-help groups develop the refugees’ leadership skills, improve their financial literacy, and support income-generating activities to reduce the overall dependency of the community. The Bhutanese Refugee Children Forum (BRCF) helps keep the camp’s young ones together.

"We need to keep making sure all children go to school,” says BRCF chief coordinator Ramchandra Chapagai, as Junge visits the forum. 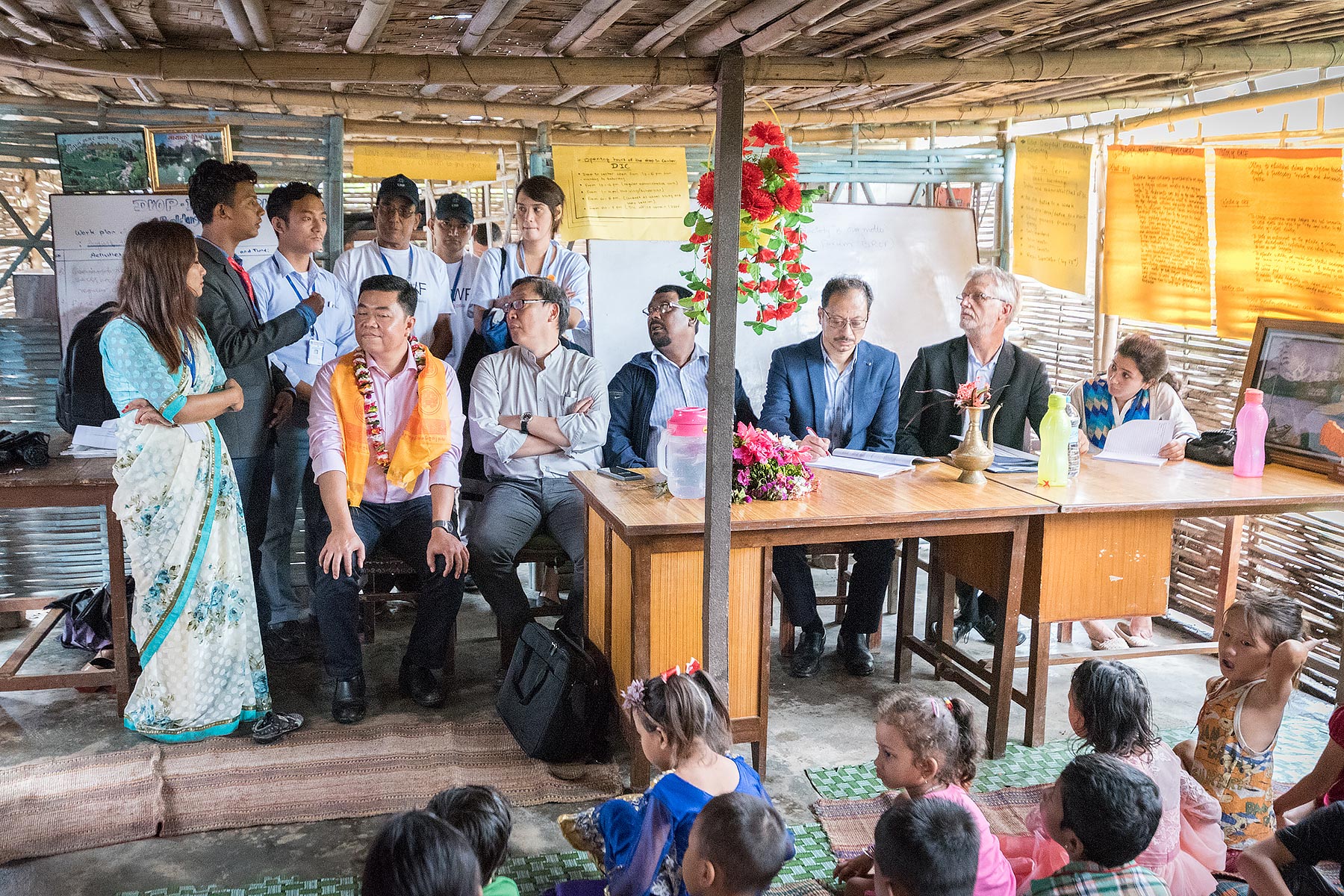 “And we also need to work harder to create child-friendly environments, where we can all feel safe and be well,” Chapagai adds.

In cooperation with the UNHCR, the LWF helps promote refugees’ access to local services and markets in the Jhapa and Morang districts. While refugees cannot currently hold public jobs or positions in Nepal, work in the private sector helps support many to earn an income, and to also contribute to Nepal society.

“Although many challenges remain in reducing the vulnerability of the refugees in Nepal society, it is deeply encouraging to see the pragmatic approach taken by the local host community, so all children can access schools in Damak and receive an education, for example,” says Junge. 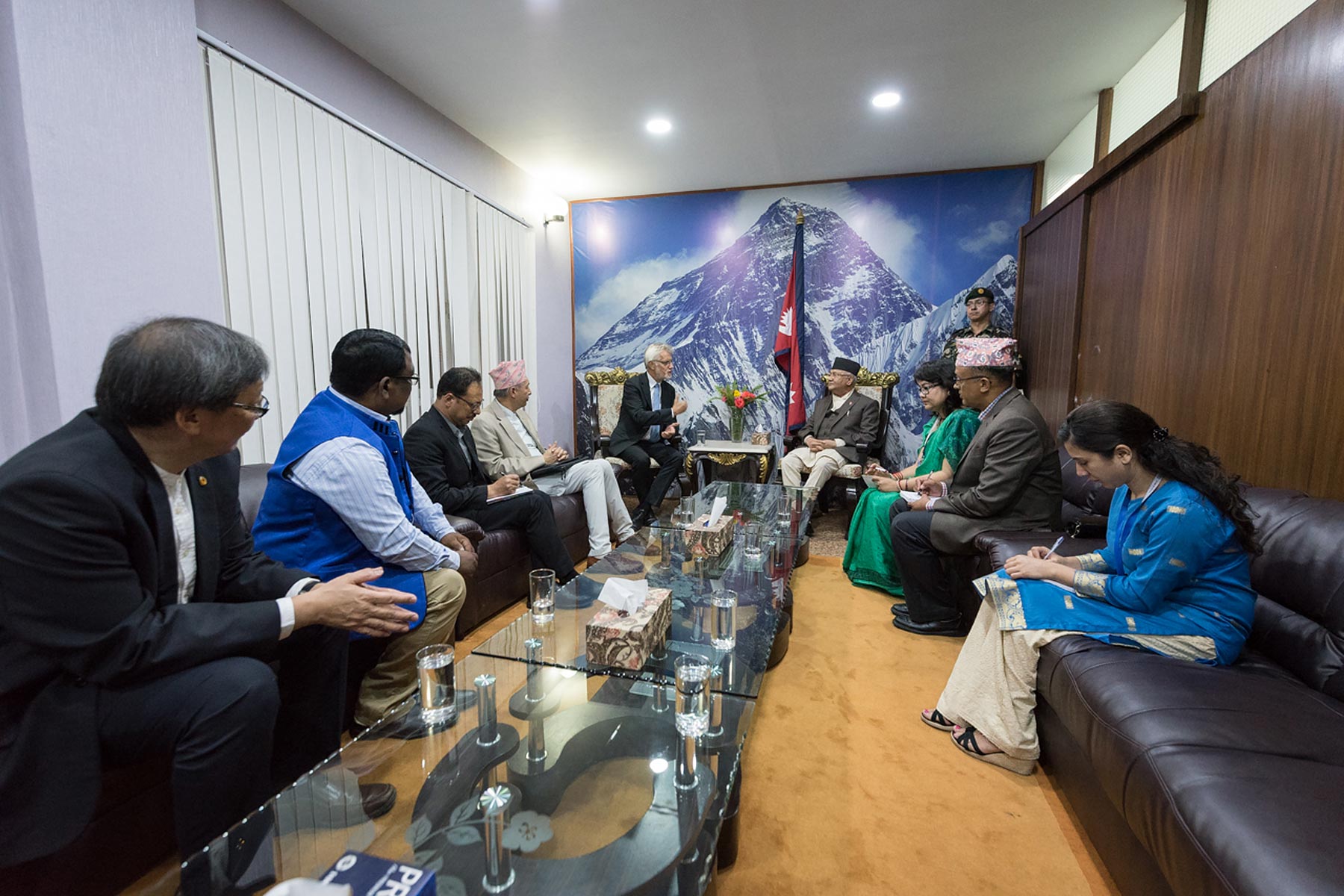 While the prime minister affirmed the valuable work of the LWF in the country for the past three decades, Junge urged, “We will be awaiting your direction to durably respond to the situation of the remaining Bhutanese refugees, and are ready to step up our support as necessary.”

Since Nepal established a new constitution in 2015, the country has been in transition into a federal system of governance, with central, provincial and local government structures established and under development.

Though expectations on the new system are high, with governance coming closer to the people, challenges remain in establishing and consolidating legislation, discerning the division of responsibilities between local and federal structures, and in establishing a fiscal system that allows the respective levels of government to function effectively.

“I believe Nepal is at a critical juncture,” says Junge, “where either federalism fulfils its potential and all is well, or the transition fails and the huge expectations of the population to see their challenges addressed are disappointed. This would be a difficult scenario.”

“If you look at the statistics of the past decade, you will see many disparities,” adds Dr Prabin Manandhar, LWF country director for Nepal. “It is a challenge and an opportunity to bridge these gaps,” Manandhar adds. 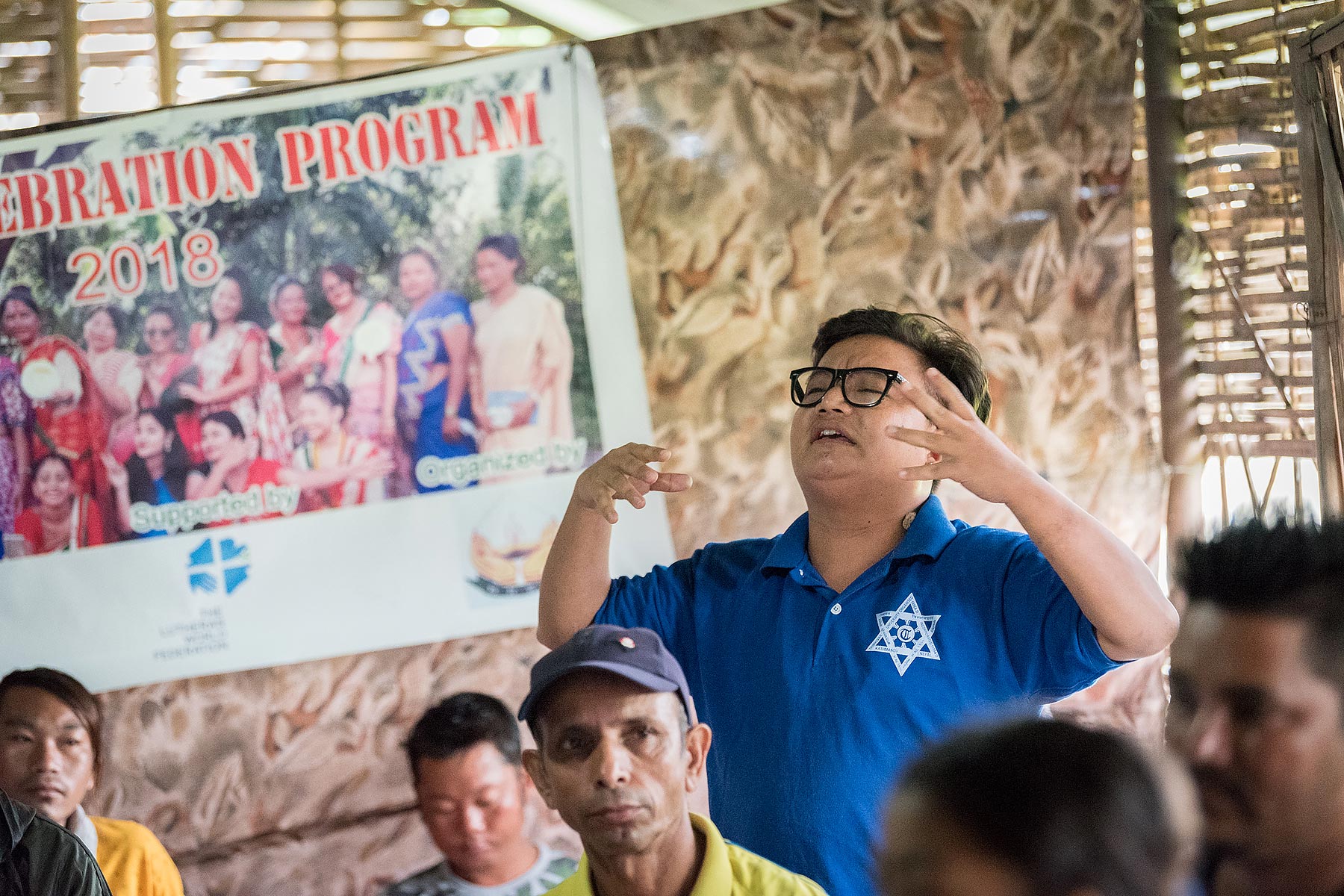 “I want to take off like a bird, I want to serve my country, I want to be somebody,” exclaims a young Bhutanese man in the Beldangi refugee camp.

“I remember a young person saying that he wants to fly, he wants to take off like a bird, he wants to serve his country, he wants to be somebody,” Junge recalls. “And I think as long as people speak like that, I have little doubt that something good will happen."

Photos from the Nepal visit 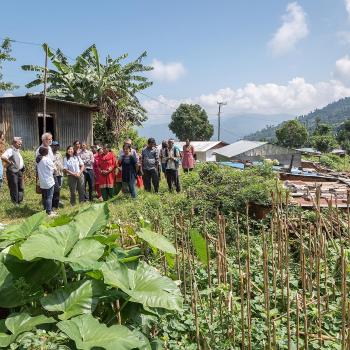 Read more
Over the past three years, LWF World Service has supported communities recovering from the 2015 earthquake, which struck with devastating effect. 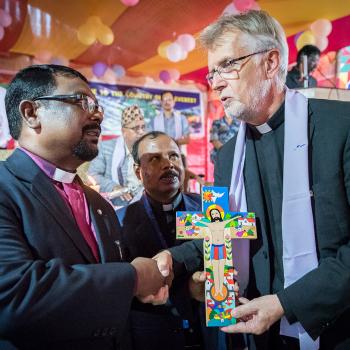 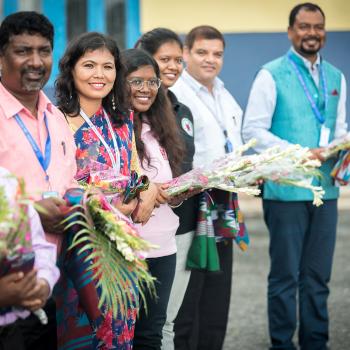