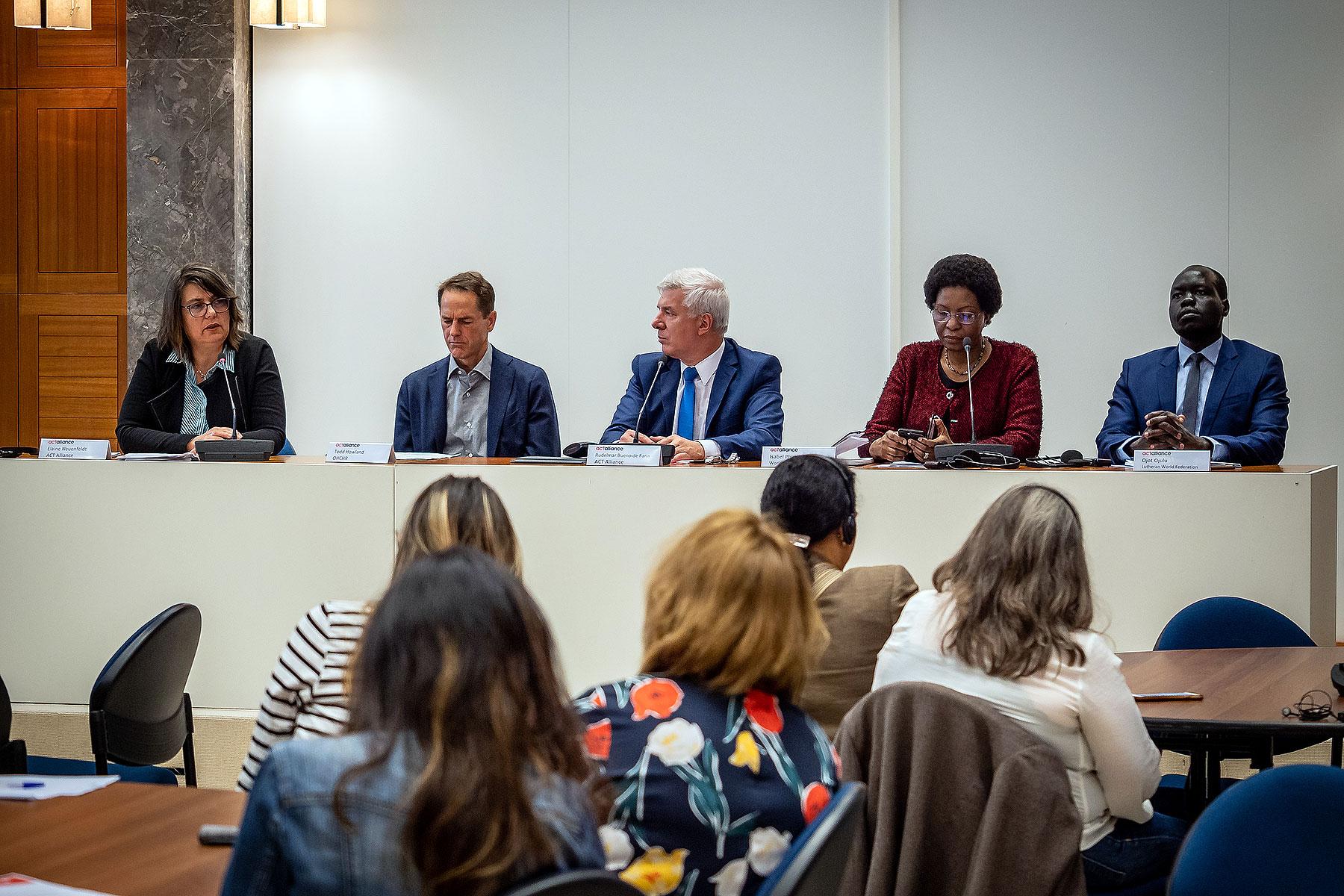 Members of the panel discussing prospects for peace and human rights in Colombia. Photo: LWF/A. Danielsson

(LWI) - The international community must do more to support those seeking to be a prophetic voice for justice and peace in Colombia today. That was the appeal from members of the Bogotá-based inter-church peace network DiPaz at an event which they organized in collaboration with the Lutheran World Federation (LWF) and the ACT Alliance.

Speakers at the 7 June panel discussion in Geneva denounced the widespread violence and human rights violations that continue in Colombia, despite the signing of a 2016 peace agreement between the government of President Juan Manuel Santos and the Revolutionary Armed Forces of Colombia (FARC). The accords officially ended more than half a century of armed conflict with that guerrilla group, which resulted in over 200.000 deaths, a further 100.000 disappearances and an estimated eight million displaced people.

DiPaz human rights defender Danilo Rueda noted that since the accords were signed, a further 138 ex-combatants or family members have been killed, in what he called “a climate of chaos and fear.” He said different sectors are seeking to sabotage crucial steps towards peace, set out in the agreement, regarding justice for victims of the conflict and land restitution.

A former legal advisor to the FARC and advisor on the dialogue with another guerrilla group, the National Liberation Army (ELN), said peace cannot prevail if Colombia’s current president Ivan Duque continues to roll back reforms agreed to by his predecessor. He said “the international community must put pressure on the president” to continue talks with the ELN and “to avoid a dangerous breakdown of dialogue” in the country.

Reporting on the LWF’s efforts to support human rights defenders in Colombia, Dr Ojot Ojulu, Assistant General Secretary for International Affairs and Human Rights said “sustainable peace will depend on recognition of the violent past.” He said the LWF works on advocacy through the Human Rights Council, the Universal Periodic Review and the Convention on the Elimination of all forms of Discrimination Against Women, “amplifying the voices of community leaders,” in particular the women, as well as indigenous and Afro-Colombian people.

In Colombia “sustainable peace will depend on recognition of the violent past.”

The importance of including women’s voices in the peace process was highlighted by Rev. Dr Elaine Neuenfeldt, ACT Alliance’s program manager for Gender Justice. Only by “listening to their stories, their narratives, their experiences,” can the state succeed in tackling the root causes of the conflict, she said. She stressed the need to keep a gender perspective at the heart of all negotiations, noting that the 2016 agreement specified that perpetrators of sexual violence should not be included in the list of crimes eligible for an amnesty.

Churches have played a vital role

The World Council of Churches deputy general secretary Dr Isabel Apawo Phiri spoke of her organization’s long history of engagement with Colombia, working alongside different churches to promote peace, reconciliation and respect for human rights. She insisted on the importance of UN support for the implementation of the peace accords, including its Verification Mission, adding that “as churches we continue to stand for peace.”

The former head of the Office of the High Commissioner for Human Rights in Colombia, Todd Howland noted how churches have played a vital role in promoting reconciliation, recalling a public act of contrition by former FARC leaders for a bomb attack on a church in the village of Bojayà which killed at least 119 people. He acknowledged ways in which the UN needed to do more to build on the 2016 peace agreement and urged governments to continue supporting human rights defenders working for “a more peaceful and inclusive society.”